Iraq is cooperating on border security with Syria, Russia and Iran. 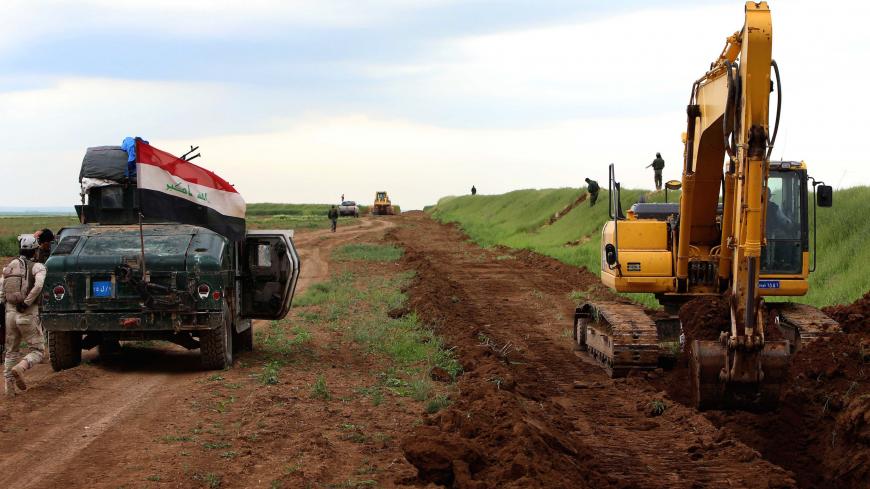 Iraqi security forces stand guard as workers dig a trench on the northern Iraqi border with Syria to prevent people from crossing into Iraq's autonomous Kurdistan Region, on April 13, 2014, in Zakho. - SAFIN HAMED/AFP via Getty Images)

Iraq's Joint Operations Command has secured about 140 kilometers (87 miles) of the border with Syria against Islamic State militants in coordination with Russia, Iran and the Syrian regime.

Despite the terror group's defeat in July 2017, IS continues to maintain sleeper cells in large areas of Iraq and Syria and its sporadic attacks kill and injure many people.

Since the beginning of 2020, there has been an uptick in IS attacks, reaching their highest level since the collapse of IS’ last strongholds in eastern Deir ez-Zor on March 23, 2019.

IS now conducts direct attacks on checkpoints and patrols and assassinates operatives or collaborators with the Syrian Democratic Forces (SDF). The militants plant improvised explosive devices and place booby-trapped vehicles on routes used by its targets.

A 610-kilometer (380-mile) border separates Syria and Iraq. Some 220 kilometers (137 miles) held by the Iraqi Kurdish peshmerga forces in the Kurdistan Region are not fortified.

Brig. Gen. Ahmed Rahhal, a defected Syrian regime officer, told Al-Monitor, “Despite the differences between Iran and Russia, the latter finds itself forced to join the center, even though it is unable to impose its decisions on Iraq,” he said.

Rahhal added, “Coordination between the Iraqi government and the Syrian regime is just for show. It is not serious. It’s rather a political move to show Russia [is playing a] role in the region and [include] the Syrian regime, which is completely absent from the scene.”

Mohammed Khaled al-Shaker, the Syrian director of the Independent Arab Movement, an opposition political current working to be part of the future political solution in Syria, told Al-Monitor, “Fighting IS is an issue agreed upon by all parties, although Iran and the SDF took advantage of the organization to serve some of their goals.”

“According to statements [by the Iraqi government], the closure of the Syrian-Iraqi border is aimed at preventing the infiltration of IS operatives from eastern Syria into Iraq, but this is a decision that carries deeper goals in the interests of both the United States and Russia. Both Moscow and Washington are coordinating together at a very high level, despite their differences. Both of them wish to curb Tehran’s role and prevent its plan to connect Iran with Syria via Iraq,” he added.

Shaker believes that Russia and the United States are likely to fail to curb Iranian influence in the region. "Along the Iraq-Syria border, dozens of unofficial crossings are run by Iranian militias,” he said.

“Despite the differences between the two, Russia finds itself obliged to coordinate with Iran on several issues. The Quartet Security Center, which includes both countries, facilitates security and intelligence coordination in the region, which is not limited to Russia, Iran, and the Syrian regime. The Iraqi government is also bound to coordinate with the SDF and the international coalition to secure its areas under the control of the Peshmerga and its border with Syria,” Shaker argues.

On March 14, the Iraqi army announced the killing of a security officer during an operation to keep an armed group from entering northern Iraq from Syria.

The same day, Iraqi forces clashed with another armed group at Mount Sinjar, exchanged fire with the militants for half an hour before the latter fled toward Syria.

On Feb. 23, the Iraqi authorities arrested 11 Syrians who were trying to cross the border from Syria into Nineveh in Iraq.

Saad Alsharae, a Syrian researcher and academic at the Orient Policy Center, told A-Monitor, “It is true that the Iraq-Syria border is long, but it has three main points: There is the Iraqi province of Nineveh, which borders Syria and lies near the Syrian city of Hasakah under the control of the SDF and the international coalition. The Iraqi city of al-Qaim corresponds to the Syrian city of Deir ez-Zor, under the control of Iranian militias. The Syrian al-Tanf, controlled by the SDF, is supported by the international coalition, and faces Anbar on the Iraqi side.”

He said that after the elimination of IS in Syria, the group had no presence outside of SDF prisons. However, new cells have begun to crop up.

Alsharae went on, “Looking at the data, IS can no longer control and rule an area, but it is not completely dismantled, and its remnant cells will continue to carry out terrorist operations in the areas of its presence. In order to confront those operations, all parties concerned are coordinating to monitor the borders and track down the remnants of the organization."