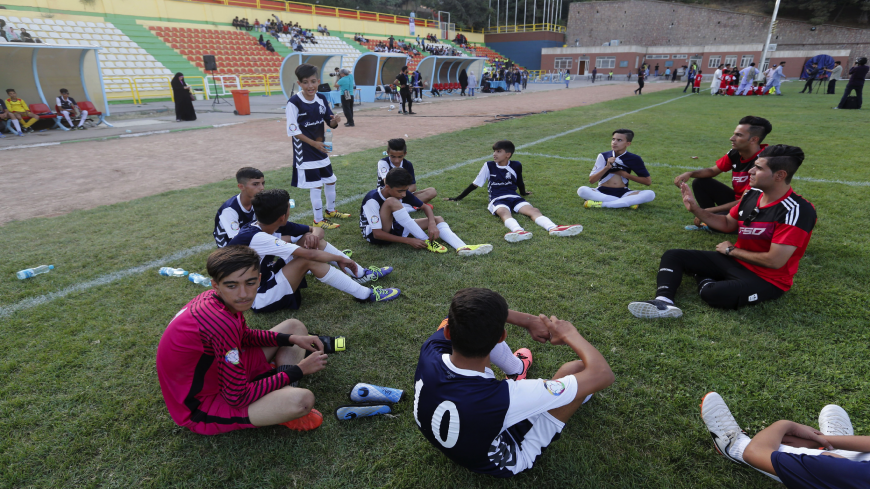 Iranian street children sponsored by the Imam Ali Foundation take a break during a football tournament in Tehran on Aug. 15, 2018. The Imam Ali Foundation held the football tournament for street kids. It was a reminder of Iran's diversity, as Azeris, Baluchis, Kurds and many others were thrown together on the pitch in the capital, Tehran. - ATTA KENARE/AFP via Getty Images

The news about the ban was broken by the foundation’s lawyer, Saeid Dehghan, on March 3 as he lamented “the show trial” in which the verdict “had apparently been drafted already” before any defenses were presented. The ruling came only 10 days after a lawsuit filed by Iran’s Interior Ministry over the organization’s “failure to carry out administrative reforms” and claims about charter violations.

The ministry’s request had been challenged by the group in a public letter to Iran’s Chief Justice Ibrahim Raisi. The IAPSRS attempted to make its own argument by raising the alarm that mistakes in handling the case “will deal irreparable harm to the civil society in Iran.”

The foundation has been rapidly expanding over the past two decades, growing its original group of a handful of university students into a network of over 10,000 volunteers, covering some 6,000 children and 700 single mothers with branches in Iran’s most underdeveloped areas, including Khuzestan and Kermanshah provinces.

The charity has also been more than open in its criticism of prevalent corruption in the Islamic Republic and the Iranian authorities’ inaction in tackling the issue of poverty. But the approach has come with a cost. For years, hard-liners have gone the extra mile to put a spike in the foundation’s wheels. They have repeatedly linked the IAPSRS to “hostile states,” accusing it of exploiting the charity mission as a cover to “infiltrate the public opinion.” And in such a campaign, ultraconservative paper Kayhan, affiliated with the office of Supreme Leader Ayatollah Ai Khamenei, has been taking the lead.

Last June, the charity’s founder and well-known philanthropist Sharmin Meymandi-Nejad had to languish for over 100 days in solitary confinement over charges of threatening national security and insulting the supreme leader.

However, the latest verdict seems to have spoken to the very existential threat faced by independent organizations in the Islamic Republic. And the shock to many Iranian activists has come from the fact that the official ban on the charity organization was pushed by the Interior Ministry of President Hassan Rouhani’s government, which they had been hoping would fight off hard-liners and advance an open civil society.

Criticism has now been expressed even from within Rouhani’s own circle, including former Transport Minister Abbas Akhoundi, who advised the president to address the issue and follow a policy that does not counter his “oath as president in defending public rights” and is “compatible” to his campaign slogans about civil freedoms.

The outpouring of rage about the “hope-killing ban” also included personal experiences shared by volunteers. They retold stories of how the IAPSRS empowered single mothers with small jobs and pulled children — once garbage scavengers — into the social pipeline with proper education. “It was the lives of thousands of kids that was outlawed [by the verdict],” tweeted Khalilollah Balochi, who campaigns for the Baluch minority in Iran’s underdeveloped southeast.

“The foundation has been banned and I can’t stop thinking about the children who have to work; all those who thanks to the foundation … were released from prison, started education, played, laughed. But now they have all lost one such supporter,” wrote Iranian activist and former political prisoner Reyhaneh Tabatabaei.