The suicide of an 11-year old boy from a destitute family has sent shock waves across Iranian society, further highlighting the questions of growing poverty and state neglect. 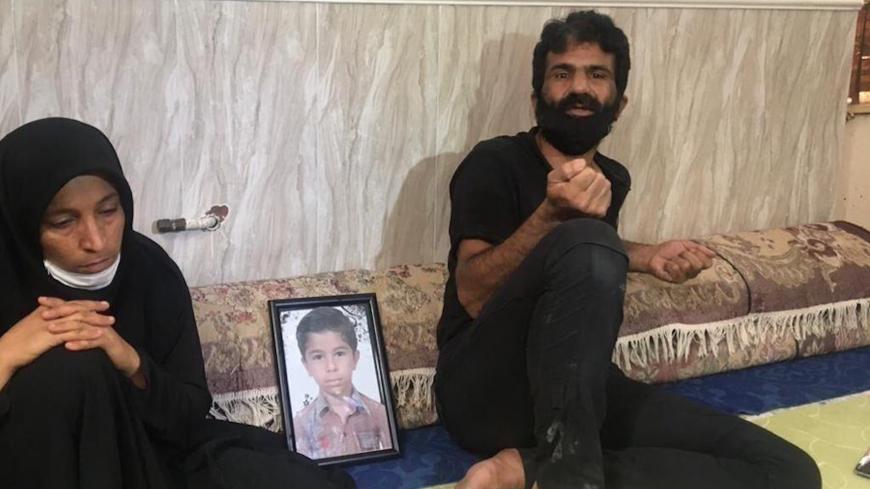 The children's parents are pictured in this undated image. - TWITTER/IranIntl_

An 11-year-old Iranian schoolboy, Mohammad Mousavizadeh, has committed suicide by hanging from the kitchen of his family’s rented, humble house in the southern city of Dayyer, Bushehr province, leaving the Iranian society in yet another state of disbelief.

The horrifying details were released by Mohammad’s mother, Fatemeh, who earns a living for her three other kids — one of them disabled — and her ailing husband, through cleaning houses as well as small donations from relatives.

“He insisted to sleep in my arms the night before his death,” the mother told Rokna News Agency, which closely monitors developments regarding Iran’s social maladies. “I had no idea what he was up to the day after,” which is when she “found him lying on the kitchen floor with his black and blue face” after he had hung himself. According to the mother, Mohammad was pushed to the edge of suicide after his dream about having a smartphone that he needed to join his online classes never came true.

As the Middle East’s biggest coronavirus victim, Iran has transformed much of its regular curriculum into virtual courses, for which students need a reliable internet connection and such devices as tablets or smartphones.

“The principal had promised several times to provide him and two other kids with smartphones, but he never did,” Mohammad’s mother recounted. Officials at Mohammad’s school, on the contrary, said they had already given him the device for free, declaring that they possessed evidence showing the kid had joined the online courses. Yet, the mother accused the school managers of “lying,” saying Mohammad only had a broken phone, not a smart one. A note in grief written by Mohammad’s teacher says the boy had repeatedly sent her messages indicating that his “broken phone” was incapable of sending or receiving images he needed for his homework.

“The school principal’s denial would not change anything because there are numerous families who cannot afford a tablet or a smartphone for their children,” wrote Reformist paper Aftab-e-Yazd. The shocking case also revealed how the Iranian government’s ambitious plans for online learning contrasted with its poor infrastructure and its failure to cover all students nationwide with the basics during the pandemic. According to the spokesman for the Iranian parliament’s Commission for Public Education, online classes remain inaccessible to as many as 3 million out of 14 million Iranian schoolchildren.

Mohammad’s suicide even prompted the ultraconservative daily Javan to describe him as a “victim of educational discrimination.” The case, the paper wrote, served as yet another indication of “the deep-rooted poverty” in the Iranian society, where the gap between the wealthy and the needy has been fast widening in recent years, due to a multitude of causes, most notably prevalent corruption.

The poverty-driven suicide by Mohammad was not an entire novelty. Last week, two other cases of suicides by hanging in impoverished areas were reported by local activists. In April, Zeinab, an 11-year-old girl from a village in underdeveloped Ilam province, similarly took her life as she was reportedly ashamed of her worn-out clothing, which her needy family could not afford to replace on the eve of the new Iranian year. She was even deprived from a proper grave in the public cemetery, according to the lawmaker representing her constituency in the Iranian parliament, and was laid to rest outside her home.

Nearly a month later and only 60 miles to the north, 12-year-old Armin, a garbage scavenger in the city of Kermanshah, ended his life, reportedly with a handful of pills. The incident occurred a few weeks after Armin’s mother succumbed to cancer in a local hospital, where managers kept her body for several days as the family could not pay the bill.

“There was no food in their home, not even a plate or a spoon,” said the manager of a local private charity whose effort to provide for some of Armin’s bare essentials came to naught.