Iranian authorities continue to cast doubt on the latest Saudi peace proposal for Yemen, where Tehran and Riyadh have been locking horns for more than six years in a deadly proxy war. 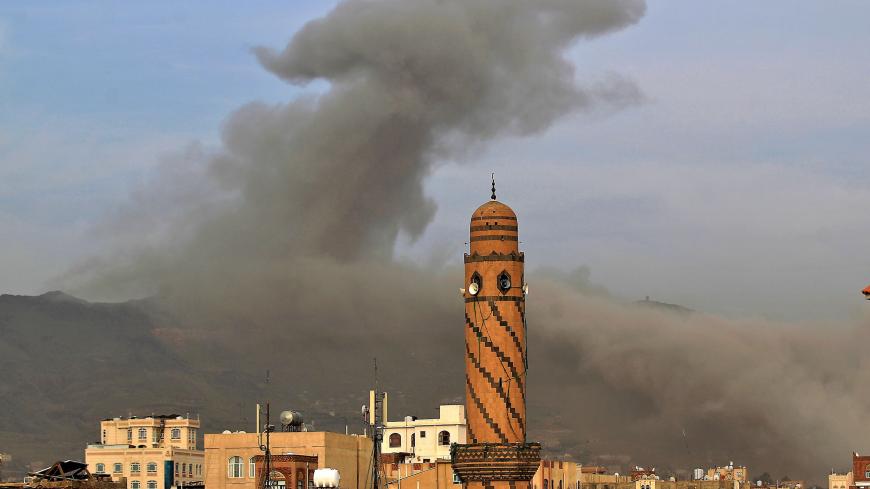 Smoke billows following an airstrike by Saudi-led coalition in the Yemeni capital Sanaa, on June 16, 2020. - MOHAMMED HUWAIS/AFP via Getty Images

“The Saudi initiative for Yemen is a project to perpetuate the war, and to continue the occupation and war crimes,” tweeted Hasan Irlu, Iran's ambassador to Sanaa.

Irlu was one of a number of Iranian officials who have dismissed the peace plan unveiled by Saudi Foreign Minister Faisal bin Farhan March 23. The Saudi initiative urges dialogue between the Iran-backed Houthi rebels and the Yemeni government. As part of Farhan’s package, a UN-monitored ceasefire will be in place and the blockade on Yemeni ports will be lifted. The offer has been welcomed by Western nations and even Iran’s ally Russia.

However, the Iranian ambassador argued that an effective end to the Yemen war will be made possible only after a “full lifting of the siege on Yemen.” Sanctioned by the US government last December, the Iranian envoy in Sanaa is a member of the Quds Force, the overseas branch of the Islamic Revolutionary Guard Corps (IRGC). Peace in Yemen, according to him, will be achieved if the Saudi government stops funding and arming “mercenaries."

The United Nations, Washington and Riyadh have all accused Tehran of funding the Houthi rebels and supplying them with missiles and rockets with which the group has hit targets well inside Saudi Arabia.

The Houthis have declined the Saudi initiative, which they say has “nothing new” to offer. But in an attempt to make them think twice, the Saudi foreign minister urged the Shiite rebels to “decide whether to put their interests first or Iran’s interests first.”

Iranian state media and officials have long portrayed the Yemen war as a “quagmire” for the Saudi military. “Six years of enormous costs and little benefits for Saudi Arabia,” read a headline on March 25 from the Islamic Republic News Agency (IRNA).

Ali Bagheri Kani, the head of Iran’s Human Rights Council and affiliated with the hard-line judiciary, also questioned the Saudi initiative on Thursday. He called the American support for the Saudi plan “a tactic to pull the murderer out of the quagmire.” Bagheri challenged the American government to provide “the defenseless Yemeni children and women” with free access to food and medicines “so that they will no longer starve to death.”

Apart from the massive death toll from direct bombardments and other forms of military attacks, the war in Yemen has thrust the already impoverished nation into a humanitarian crisis.

According to the United Nations, four out of five Yemenis currently depend on humanitarian assistance. The majority of the country’s children are grappling with one or another form of food insecurity with 2.3 million of them suffering from acute malnutrition.

Still, in their endless blame game, both Iran and Saudi Arabia have dismissed accusations that they have been writing a recipe for disaster in Yemen by turning it into their proxy battlefield.