Shortly after Nasser al-Qudwa was dismissed from Fatah due to his insistence on running in the legislative elections separately from the movement, he announced a new group dubbed the Palestinian Democratic Assembly and its extensive electoral program. 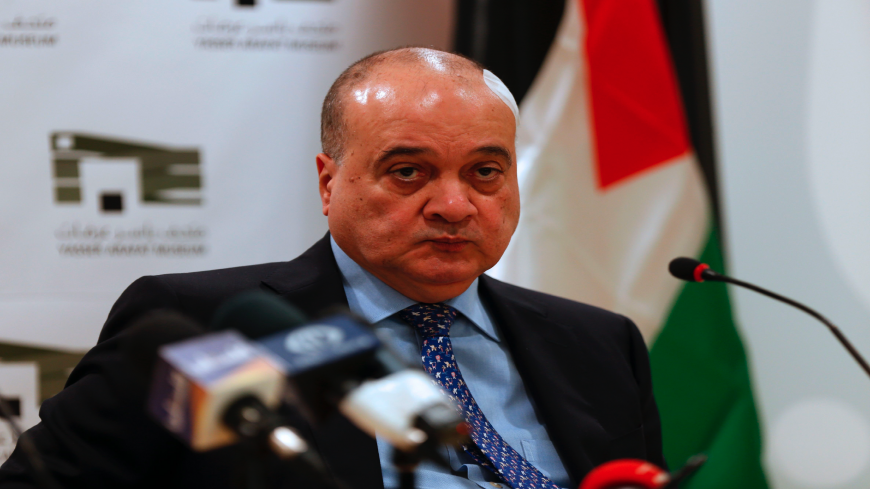 Nasser al-Qudwa, a member of Fatah's Central Committee and the nephew of late Palestinian leader Yasser Arafat, reacts during a press conference in the West Bank City of Ramallah, on January 18, 2017. - ABBAS MOMANI/AFP via Getty Images

Former Palestinian Foreign Minister Nasser al-Qudwa revealed March 22 a three-level political program for the Palestinian Democratic Assembly (PDA) that he helped establish in order to participate in the upcoming Palestinian Legislative Council (PLC) elections. Al-Monitor attended the virtual press conference, during which Qudwa announced his program and the detailed plan of the three-phased electoral program of the newly established group headed by the dismissed member of the Fatah Central Committee.

It begins with a simple, three-part Arabic slogan for the elections that translates into “We want to change, we want to liberate, we want to build.”

A more detailed 35-page plan deals with local, regional and international issues, with a strong emphasis on the need to achieve national unity. The plan also provides a road map for the yet-to-be-announced list of candidates that will participate in the May 22 PLC elections.

After defining the PDA as “a democratic forum aimed at bringing Palestinians together using the democratic mechanisms,” Qudwa details the aspirations of the Palestinian people in all three locations: the state of Palestine under occupation in 1967, including Jerusalem; Palestinians who are living in the diaspora and especially in refugee camps whose needs must be addressed within the PLO; and Palestinians who stayed in their land in what has become Israel and who are “part of the Palestinian people” even though their legal status and struggle is different.

The author of the detailed program decided to give the COVID-19 pandemic the priorities of a national emergency by calling for the “rapid response to this emergency, providing all needed resources to face it and the need to protect the weaker sectors of society.”

The detailed program of the PDA calls for Palestinian national unity, including the need for “Hamas to give up its unilateral control over the Gaza Strip and to agree to return to the unified Palestinian political and administrative administration.” The plan also calls on Fatah and the leadership of the Palestinian Authority (PA) to “accept true partnership [with Hamas] within the context of the Palestinian National Authority and the PLO.”

The PDA program calls for a law to protect the democratic process from Israeli attacks, arrests and threats “by accepting the Norwegian Law or laws like it” to protect Palestinians from Israeli interventions.

On the 1993 Declaration of Principles commonly referred to as the Oslo Accord, the PDA program states that “it is not wise for the Palestinian side to be responsible for the cancellation of the agreement that Israel has practically canceled.” Instead, it says that the proper approach would be to “continue with some aspects of the agreements, such as the presence of the PA, the customs and tax exchange.” The plan talks about the need to complete the election process and ensure that regular polls take place on time and in all aspects of life by ensuring a democratic atmosphere.

Freedoms, especially basic individual freedoms, and press freedom must be respected, and all forms of discrimination are rejected, according to the program, while ensuring the independence of the judiciary and the unification of all laws in Palestine.

The struggle of independence of Palestine on the 1967 borders is given special attention as the plan rejects the idea of “trying the frantic push to control all Palestinians lands and thus help establish greater Israel.”

Jerusalem is also given special attention in the plan, calling for care to its residents especially in the education, health and economic areas, and the need to support its steadfastness both as individuals and institutions.

Colonial settlements must be fought at all levels, the PDA program states, through a governmental agency that will work on protecting and defending the land and ensuring Palestinian presence while giving support to areas that are adjacent to Israeli settlers and the wall by making it attractive to citizens to move there. The rights of families of martyrs, prisoners and the injured must be adhered to, and all efforts to ensure the release of the prisoners and the return of the bodies are given priority, the statement says.

Other areas of interest include detailed plans for the development of the educational and health care sectors. Culture education, women, the youth, the elderly and the environment are all dealt with in detail. The Arab belonging and international aspects round up the 25-point detailed plan of the PDA.