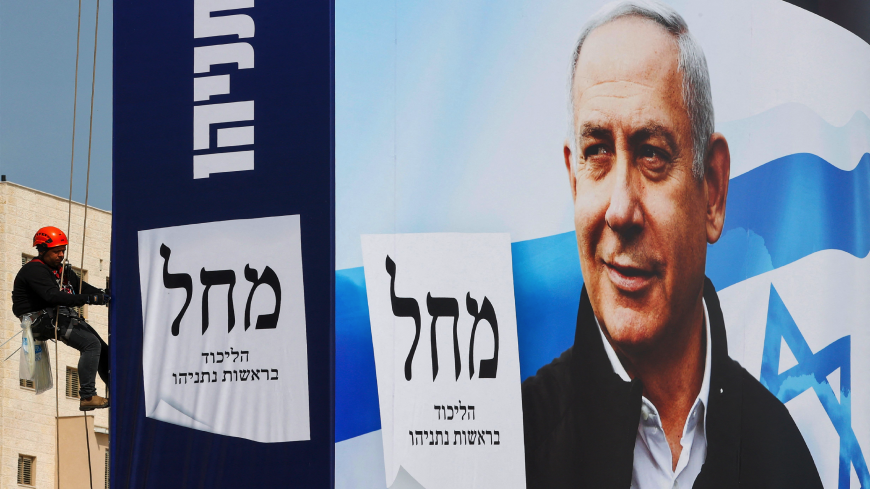 A worker hangs election campaign posters for Israel's Likud party bearing a portrait of its leader Prime Minister Benjamin Netanyahu on a billboard in the Israeli central city of Bnei Brak, on March 14, 2021. On March 23, the 71-year-old wily politician faces his fourth reelection contest in less than two years after repeatedly failing to unite a coalition behind him despite his devoted right-wing base. - JACK GUEZ/AFP via Getty Images

Anwar Gargash, who served as minister of state for foreign affairs from 2008 until February, said the point of the normalization agreement between Israel and the UAE is not related to Israel’s election.

“The UAE will not be a part in any internal electioneering in Israel, now or ever,” said Gargash on Twitter Wednesday.

Israelis will head to the polls on March 23 for the fourth national election in two years. Netanyahu is seeking to continue his historically long tenure as prime minister, which began in 2009.

Netanyahu has touted the Israel-UAE normalization agreement on the campaign trail. The UAE agreed to establish full diplomatic relations with Israel last year as part of the US-brokered Abraham Accords. The UAE was only the third Arab state to recognize Israel and the first to do so in more than 25 years. The historic deal led to Bahrain and Morocco following suit in establishing relations with Israel.

Netanyahu has been talking about his long-planned trip to the UAE recently and said four more regional states were planning to normalize relations with Israel as the election heated up. He also said the UAE planned to invest $10 billion in Israel, though Emirati officials have said it is too early to discuss exact figures, according to The Associated Press.

After postponing several times due to COVID-19 concerns, Netanyahu planned to visit the UAE this month, which would have made him the first Israeli leader to visit the Gulf country. However, he canceled the trip last week due to a dispute with Jordan.

“We made an agreement with Israel as a country and not with a specific person,” said the unnamed official, according to Kan.

On Thursday, the Israeli news outlet Yedioth Ahronoth reported that the UAE government had suspended preparations for an upcoming Netanyahu visit.