Egypt and the United Arab Emirates are calling for Syria to be accepted back into the Arab League as analysts say that its suspension has done little good. 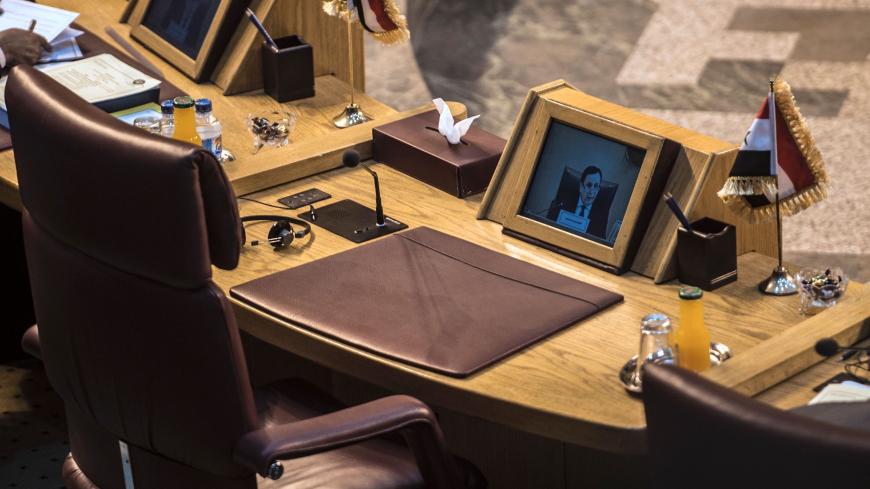 An empty seat for Syria is seen during a meeting of foreign ministers at the headquarters of the Arab League in the Egyptian capital Cairo, on March 7, 2017. - KHALED DESOUKI/AFP via Getty Images

CAIRO — Egypt and the United Arab Emirates have called for Syria’s return to the Arab League nearly 10 years after its membership was suspended.

Egyptian Minister of Foreign Affairs Sameh Shoukry said during the opening session of a March 3 meeting of the Arab League Foreign Ministers Council, “Syria’s return to the Arab League as a stable and active state would be vital for maintaining Arab national security.”

However, Shoukry stressed the need for “Syria to pragmatically demonstrate a will to move toward a political solution based on the Security Council resolutions.” He added, “Accommodating the [Syrian] national opposition would reduce the intensity of the conflict and pave the way for Syria to emerge from the furnace of this ongoing war to safety.”

Days later, UAE Minister of Foreign Affairs Sheikh Abdullah bin Zayed Al-Nahyan called for regional cooperation to end the war in Syria and ensure its return to the Arab League.

Speaking at a press conference in Abu Dhabi with his Russian counterpart Sergey Lavrov on March 9, Nahyan said, “Syria’s return to the Arab fold is essential and has nothing to do with who wants or who does not want it. It is a matter of public interest and the interests of Syria and the region.”

In 2011, the Arab League foreign ministers suspended the participation of Syrian delegations in the meetings of the Arab League and all affiliated organizations and agencies and imposed economic and political sanctions against the Syrian government. They also called on Arab countries to withdraw their ambassadors until protection is secured for Syrian civilians protesting against President Bashar al-Assad’s regime.

Diplomats and political analysts in Cairo who spoke to Al-Monitor believe that suspending Syria’s membership in the Arab League not only produced no positive results, but led to an increase in foreign interference. They said that Syria’s return to the Arab League would give Arab parties an opportunity to contribute to resolving the Syrian crisis.

He added, “Suspending Syria’s membership in the Arab League led to increasing foreign intervention, especially Turkish and Iranian meddling, in the Syrian crisis. Besides, Arab countries must have a clear role in helping resolve the crisis to protect Arab national security.”

Ahmed Youssef Ahmed, a professor of political science at the University of Cairo and former dean of the Institute of Arab Research and Studies, told Al-Monitor over the phone, “Suspending Syria’s membership at the Arab League has been a mistake from the start, since the Syrian government continued to represent Syria at the United Nations and participate in all deliberations related to the conflict there.”

He went on, “Restoring Syria’s membership in the Arab League would be a positive decision because it would help deliberate with the Syrian government, listen to it, advise it or even pressure it into reaching a solution to the conflict that has deeply harmed a major and influential Arab country in the Middle East.”

Ahmed said, “I now feel a shift in the stances of some of these countries. I hope this will facilitate a majority decision to bring the Syrian government back to the Arab League.”

With the increasing calls for Syria’s return to the group, Qatari Minister of Foreign Affairs Mohammad Abdul Rahman Al-Thani stressed his country’s objection to the Syrian government reentering the Arab League in a March 11 press conference, saying, “The reasons behind the suspension of Syria’s membership in the Arab League are still valid.”

In September 2011, the Arab League presented a 13-point initiative to settle the crisis in Syria including an immediate halt to violence against civilians, serious political contacts between Assad and opposition representatives and multi-party presidential elections.

Ahmed said, “The countries that consider themselves against Assad’s regime and support the opposition against him believed that distancing the Syrian government from the Arab League would expedite his fall. But this did not happen.”

Abdul Menhem Said, a political analyst and member of the Egyptian Senate, told Al-Monitor over the phone, “Egypt wants the situation in Syria to stabilize. The current Syrian government must be given some incentive by restoring it to the Arab League, especially since it represents Syria at the UN. Besides, its return to the Arab League is logical as negotiations on a solution to the crisis would be more appropriate and reflective of the situation on the ground in Syria.”

He added, “Syria’s return to the Arab League is important because it would give Arab parties a chance to take part in resolving the Syrian crisis. Egypt is especially interested in stability in the Middle East and in calming the areas of conflict and tensions.”

Khaled Okasha, director of the Egyptian Center for Strategic Studies, told Al-Monitor, “The Egyptian call and the subsequent Emirati demands for the return of Syria to the Arab League are important and reflect major strategic awareness. The region needs Arab efforts to solve its crises and to take control of Syria’s future amid foreign intervention, especially from Ankara and Tehran, which have deeply harmed the Syrian internal arena.”

Okasha said, “Returning Syria to the Arab League, allowing it to rehabilitate its political life, will help maintain regional security for all Arab states.”