In response to Turkey’s Operation Peace Spring in northern Syria, the Egyptian parliament hosted Syrian Ambassador to Egypt Bassam Darwish in a move to show its official support for Syria against Turkey, and as a prelude to better diplomatic relations. 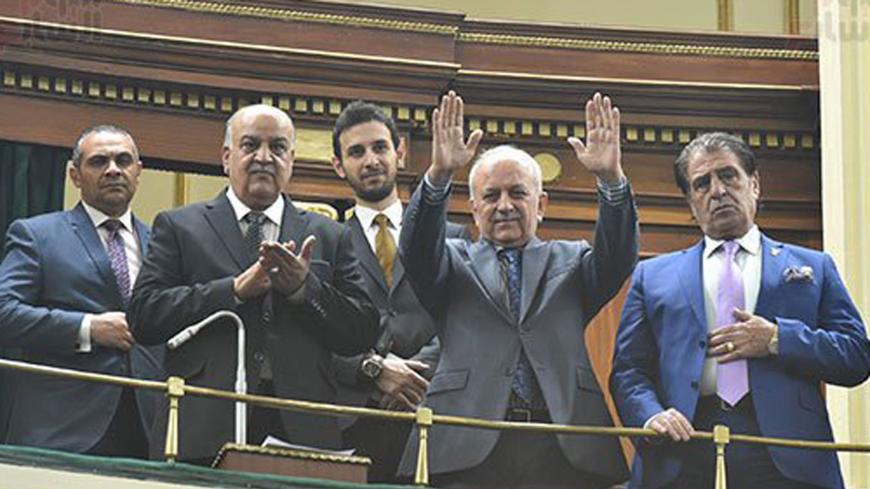 Syrian Ambassador to Egypt Bassam Darwish (C) receives a standing ovation upon his visit to the parliament in Cairo, Egypt, Oct. 20, 2019. - Twitter/@Mansourtalk

The parliament did not only support Syria in its statements. At the invitation of the Arab Affairs Committee, it hosted Oct. 20 Syrian Ambassador to Egypt Bassam Darwish and his delegation, who were given a standing ovation at the plenary session.

Moreover, a delegation of the National Progressive Unionist Party, a leftist party, made a visit Oct. 23 to the Syrian Embassy to voice Egypt's support for Syria against Turkey.

At the invitation of the Egyptian Bar Association, the Permanent Office of the Arab Lawyers Union held Oct. 27 an emergency session in Egypt, in the presence of Darwish. The participants called for Syria’s return to the Arab League, the support for the Syrian Arab Armed Forces and for a boycott of all Turkish goods.

The Egyptian support for Darwish also involved the pro-regime media outlets. Speaking over the phone Oct. 9 on Egyptian journalist Ahmed Moussa’s show on Sada ElBalad channel, Darwish explained the role of the Syrian Armed Forces against the Turkish military operations in northern Syria.

Observers believe that the Egyptian moves to support Syria point at a restoration of ties between Egypt and the Syrian government and exchange of high-level diplomatic visits between the two countries.

Abdel Hamid Kamal, a member of parliament and a top official of the National Progressive Unionist Party, told Al-Monitor, “Parliament hosting Syrian Ambassador to Egypt Bassam Darwish is proof that the Egyptian street welcomes the support for Syria and its armed forces and the restoration of diplomatic relations. The Egyptian parliament is an elected institution that expresses the Egyptian street’s orientations and does not deviate from the official foreign policy of the Egyptian state.”

He added, “Turkish military operations in northern Syria pushed the Egyptian parliament to declare support for Syria in the face of the colonialist schemes, and will speed up the restoration of ties.”

In the same vein, Maj. Gen. Saad al-Gamal, deputy speaker of the Arab Parliament and a member of the parliamentary Arab Affairs Committee, told Al-Monitor, “The Arab role in the Syrian crisis is missing. The Egyptian parliament hosting Darwish — considering him as a diplomatic representative of the Syrian government — shows that the parliament welcomes any visit by Syrian diplomats in support of the Syrian cause, its territorial integrity and the Syrian Arab Armed Forces.”

He said, “Egypt is currently focusing its efforts on an Arab mobilization for the support of Syria and having a stake in Syria’s return to the Arab League. This is particularly true since, remarkably, the Gulf countries opted for a balanced position toward the Syrian crisis and opposed the Turkish aggression in Syrian territory.”

Mohamed Orabi, former minister of foreign affairs and member of the parliamentary Foreign Affairs Committee, told Al-Monitor, “The return of high-level diplomatic visits between Egypt and Syria requires that Syria gets back to the Arab League, which Egypt is working on.”

Orabi said, “The Gulf states — except for Qatar — changed their views toward the Syrian regime, which would help Syria’s return to the Arab League and then the return of higher level diplomatic visits between Egypt and the Syrian government.”

He told Al-Monitor, “There is official support for the Syrian government’s moves, particularly since there are high-level security visits between Egypt and the Syrian government. Most notably among these is the visit Gen. Ali Mamlouk, head of Syria’s national security bureau, made to Cairo in December 2018, during which he met with officials of the Egyptian intelligence.”

He explained that “ministers in the Egyptian and Syrian governments will exchange visits, particularly in the cultural and services fields in the upcoming period, in addition to the parliamentary visits. At the opportune time, there will be a return of high-level diplomatic visits by senior Syrian and Egyptian officials, especially following Syria's return to the Arab League for considerations relating to some Arab and Western countries.”

Fahmy noted that Egypt is working on the full restoration of relations and visits between the two countries, and concluded, “Egypt is taking successful steps toward its objective, because Cairo is keen on the interest of the Syrian people who want stability back in their country.”