A South Sudanese man in Egypt recently opened an academy to teach and train African refugees passionate about soccer. 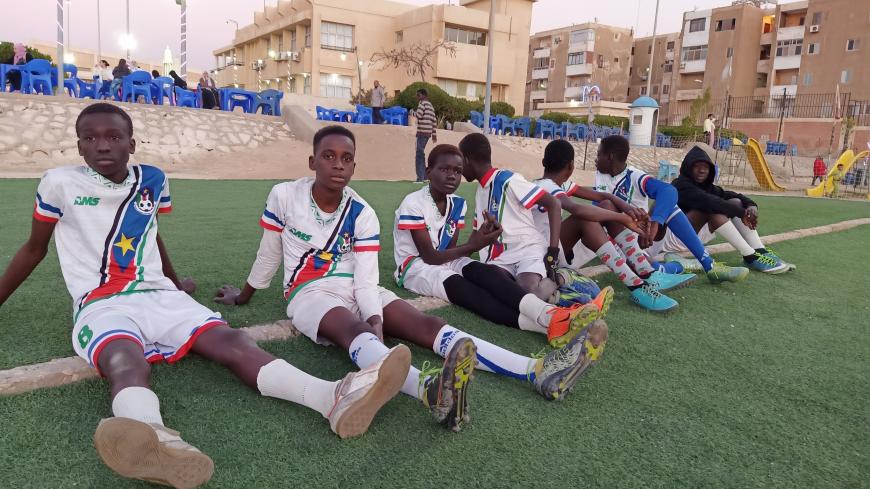 Young soccer players during a training session at the South Sudan Academy in Egypt. - Ahmed Gomaa

CAIRO — Three years ago, Francis Dennik Kwal, who hails from South Sudan, came to Egypt to study at the American University of Cairo. However, he cut his educational path short when he decided in late 2020 to inaugurate an academy to teach soccer to African refugees in Egypt.

Kwal previously played for several clubs in Sudan, including Al-Ahly Shendi Club and Al-Nesoor Sports Club. He sought to extend his athletic career in Cairo by establishing the South Sudan Academy for African refugees who are passionate about soccer.

The academy has accepted refugees from various African countries. It has three teams — one for boys, one for girls and young women and one for men 18 and above. He coaches all three.

Kwal told Al-Monitor, “The academy includes African players in Egypt, most of whom hail from South Sudan, in addition to players from Congo, Sudan, Nigeria and Mali. The door is open to all African refugees who are interested in joining at any time.”

He added, “The main purpose of the academy is to develop the abilities of players and amateurs and prepare them to play on Egyptian and European [official] teams. The academy also helps train children while focusing on the ethical and disciplinary aspect. We are raising a generation that is scientifically, athletically and culturally competent.”

Kwal said, “The academy can contribute to cementing ties among African countries and refugees in Egypt specifically and opening new horizons for them in the country.”

The academy has around 200 players, Kwal said.

As of December 2020, the UN refugee agency UNHCR has documented nearly 260,000 refugees and asylum seekers in Egypt, including 49,000 from Sudan. The Sudanese constitute the second-biggest nationality of refugees living in Egypt after Syrians; there are also South Sudanese, Eritreans, Ethiopians, Iraqis and Yemenites.

A report published by Independent Arabia on Dec. 11 talked about the hardships faced by African refugees in Egypt, including bullying and racism, often amounting to physical abuse.

Egyptian President Abdel Fattah al-Sisi told the World Youth Forum held in late 2019, “Egypt considers refugees on its territory as guests, no matter how large their numbers. It is forbidden and unacceptable to mistreat refugees.”

Kwal said, “Egyptians are welcoming when we play soccer games with them. My relationship with them is good, and I receive huge support from them. Soccer does not have a certain race or category. We all speak one language.”

He had positive things to say about the women's team. “Generally, women's soccer is new in Africa. But they are currently achieving good results at the academy. This is promising.”

Coming up the money to pay for the teams is an issue, however. “Many obstacles face the African refugees’ academy in Egypt, mainly the lack of funding from an official party or independent or international organization," he said. "We are making up for that by collecting symbolic fees from players to book fields for practice and buying the necessary equipment.”

He added, “The academy is a big dream through which we want to train players well and build their capacities to enable them to play professional football and help our different countries.”