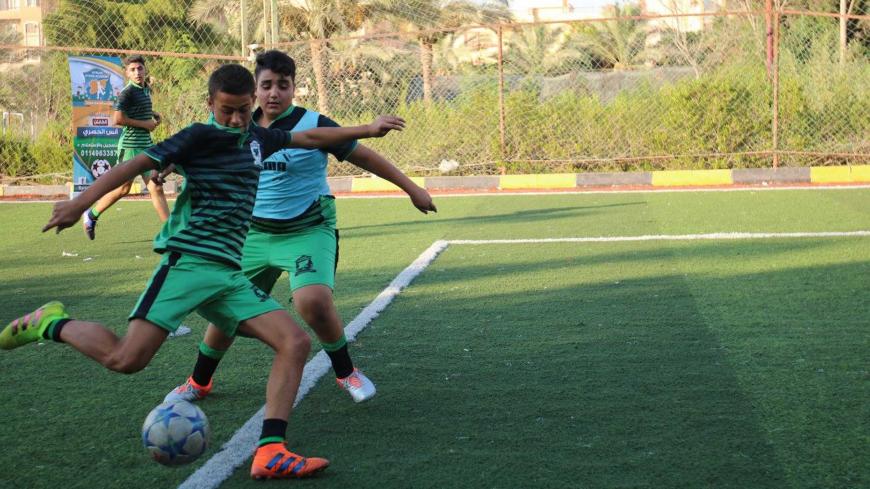 CAIRO — Anas Hosary’s soccer academy is heading into its fourth year of using sports to help Syrians in Egypt integrate into their home away from home. Some 180 young boys and teenagers now train at the Syrian Stars Academy, founded in 2014 by Hosary, a former player with the Syrian national soccer team. Half of the players are Syrian.

The Egyptian Football Association’s August 2017 decision to allow every Egyptian Premier League club to recruit two players of Syrian or Palestinian nationality has been encouraging for the academy and its students.

“Initially, the academy targeted Syrian children,” Hosary told Al-Monitor. “As of 2016, we started accepting Egyptian and non-Syrian Arab nationals. Our goal is to train professional soccer players who would ultimately join professional Egyptian and European clubs.”

Hosary said, “I would like to reassure Syrian children who had to leave their country that as long as they are talented, it is not the end but the beginning.” Hosary arrived in Egypt five years ago, after playing soccer in Cyprus.

When the academy opened, the 10 players who showed up were charged a relatively symbolic fee of around 150 Egyptian pounds ($9) per month. It remains the same today. Training is held four days a week at a pitch Hosary owns in 6th of October City, in Giza governorate. The trainees are divided into two groups, one for youth 5-15 years old and the other for youth 16-17 years old. A total of 16 training sessions is held each month for both age groups. Each group has its own coach.

There are no prerequisites for joining the academy in terms of skill level or prior experience, but the best players are selected during training sessions to form a team to compete against teams from high schools in 6th of October City in the Syrian Stars Cup, a competition Hosary organizes annually.

Hosary said that the cup was previously held in 2016 and 2017 and will next take place next month. “The aim of the championship is to search for talented children and integrate them with children from other schools,” Hosary said. “This would help them overcome fear [about competing] and introduce them to clubs attending this championship.”

Hosary tries to attract a large number of children through the academy’s Facebook page, where he posts pictures of training sessions and organizes talks about the importance of soccer. When it comes to the academy’s achievements to date, Hosary said, “A couple of our players succeeded in joining Egyptian clubs, and one of our players joined a Brazilian club.”

Despite Hosary's contacts with various teams and his ability to organize matches with larger clubs, financial challenges are hampering efforts to expand the academy. He hopes to obtain funding to be able to access bigger clubs for training sessions and to expand the academy’s activities to include swimming, handball and tennis.

“I’m also hoping to help the Egyptian community by helping Syrian Stars integrate into their soccer clubs,” he said. “At the same time, the Syrian national soccer team would also benefit from their talents if they return to their hometown.”

Amir Abdel-Halim, the editor-in-chief of the FilGoal website, told Al-Monitor, “The idea of having a soccer academy led by a former soccer player is not new, but what is different about this particular academy is that the founder is a Syrian soccer player. This initiative came after the decision to incorporate Syrian soccer players into Egyptian clubs, which has received support from Syrians in Egypt.”

He said that the decision allowing Egyptian clubs to register Syrian and Palestinian players resulted in the signing of two Syrian players, Moayad Ajan and Alaa al-Shbli, by Zamalek SC in August and negotiations by Ahmad al-Salih and Abdullah al-Shami with Al Ahly SC.

A number of Syrian nationals in Egypt have begun businesses in Egypt. According to “Jobs Make the Difference,” a report published in May 2016 by the United Nations Development Program, Syrians in Egypt have invested the equivalent of $800 million in the Egyptian economy since the civil war broke out in 2011.

Naila Jabr, the head of the National Coordinating Committee on Preventing and Combating Illegal Migration and Human Trafficking, told Al-Monitor, “Egypt is a haven for Syrians, because they are not discriminated against based on nationality.” She pointed out that this climate helps Syrians integrate into Egyptian society and launch private projects across the country. Some have begun producing Syrian products, for instance, and others have opened popular beauty salons.

“Having an academy to teach Syrian children soccer is a new step toward integration in Egypt,” Jabr said, explaining that Hosary's academy and similar institutions that support Syrian refugees often face financial difficulties due to the country’s economic woes. “The government is unable to financially support refugee activities in the country. Yet the government does not obstruct aid granted to Syrians from donors.”

When asked about the steps that should be taken to support Syrian refugees in Egypt, Jabr responded, “Egypt hopes for a solution to the Syrian humanitarian crisis so that they can return to their home country.”