In Egypt, where Copts who apply for soccer clubs get the standard reply “We’ll call you,” Je Suis Academy offers them a chance to train and overcome prejudices. 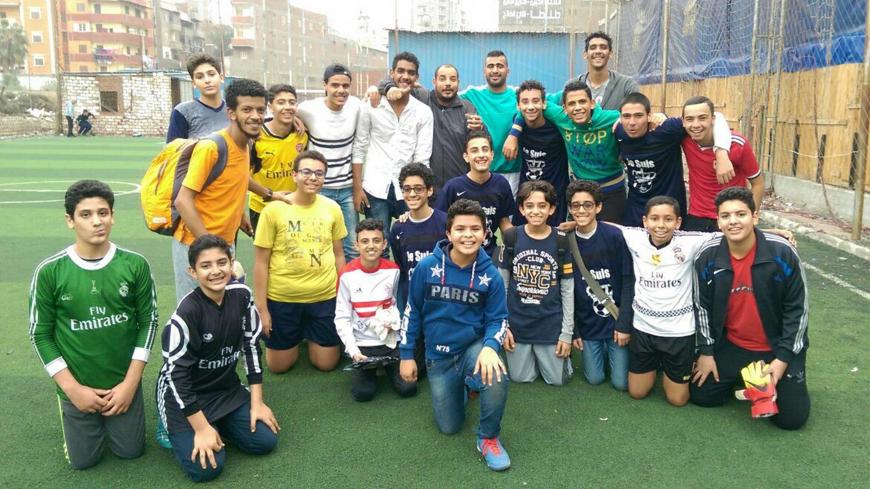 Mina Samir, a 16-year-old from Alexandria, was on the brink of losing all hope to become a professional soccer player in major Egyptian clubs. Despite his passion and performance in the game that earned him the nickname “Mina Ronaldo,” after the famous soccer player, Egyptian club coaches simply refused to sign him on.

Samir thought the refusal was because he was a Copt and that he, like many Copts before him, would never find a place on the soccer field. That changed in June when he enrolled in the first soccer academy for the training of Copts. Three months later, he joined the soccer team formed by the academy.

Samir now goes twice a week to Alex Sports Academy, a medium-sized stadium in the district of al-Saah in Alexandria.

“Faster! Pass it on to your teammate,” the academy's coach and founder Mina Bendary screamed during a training match.

“Faced with constant refusals and discrimination, young Copts who have a gift for soccer tend to play soccer just for fun rather than dedicate themselves to this sport and seek a career,” Bendary, 23, the founder of the Je Suis Academy, the first academy for Coptic children and adolescents, told Al-Monitor.

Bendary, a former player in the Al Ittihad Alexandria club until 2012, knows firsthand the difficulties and discriminations that Copts face in soccer, even when they are lucky enough to be part of a team. He quit Al Ittihad when he was restricted to the bench during most key games. Then he left the large team to join another small club called Abou Qir in Alexandria, but there he also faced discrimination and finally quit the field altogether in 2015.

In 2016, he started training young children who were eager to play soccer, including Samir. When he saw that Coptic families started discouraging talented children to take up soccer as a career, he decided to start an academy and a soccer team.

His academy aims to provide the trainees, ages 7-20, with an opportunity to improve their skills, play within a team and prepare them for big clubs in the Egyptian league, with the expectation that the well-trained and highly skilled boys would be too good to refuse, despite discriminations.

Bendary named his academy “Je Suis” — “I Am” in French — because he wanted to help Coptic children realize their potential despite injustices and frustrations they suffer.

The academy currently includes about 50 trainees. It has a branch in Alexandria, a branch in the city of El-Mahalla in the middle of the Nile Delta and another in Abu El-Matamir city in the Beheira governorate. Although it also includes Muslim trainees, its main goal is to train Coptic children and help them play professionally to join the premier leagues.

Samir told Al-Monitor that many of his teammates in the academy, like himself, had been rejected many times by other clubs before joining the academy.

“I have been playing soccer since I was a child. I started trying to join clubs four years ago. My first experience was with the Ismaily club,” he said, adding that the coach had initially been impressed by his performance on the field.

“But when I told him that my name was Mina Samir, he took the form and said, ‘Perfect, we will contact you,’ but no one contacted me.”

The same experience was repeated with Petrojet Sporting Club in Cairo last year and then with Alassiouty club a few months ago. Despite his success in preliminary examinations, he found himself rejected or not contacted as soon as the coaches read his name on the form. Disillusioned, when he applied for the Alassiouty Club, he put down his name as “Messi” — another nickname he has due to his “golden left foot,” but the coach asked him his real name and ended the conversation with the typical “We’ll call you.”

Emad Gad, a Coptic member of parliament, said in an article published in El-Watan news that Copts in Egypt suffered from restrictions in soccer and were being forced to establish their own academies.

Hassan Shehata, the former coach of Egypt's national team from 2004 to 2011, told Al-Masry Al-Youm on Jan. 14, 2010, that the national team picks its players based on proper behavior and the relationship between the player and his God. He criticized former national team player Mohamed Zidan for not praying to Allah.

Although no statistics accurately show the percentage of Copts in Egypt (6% according to a 2012 government census, the latest government census, and 15-20% according to the church), the national Egyptian team currently does not have a single Coptic player, and Coptic players are rare in the Premier League clubs. Only a handful of Coptic players ever became famous: Hany Ramzy played on the national team from 1988 to 2003. There are three other players who are less popular: Ashraf Youssef, who played for al Zamalek during the 1990s; Nasser Farouk, the last goalkeeper of the Ghazl El Mahalla Sporting Club who played until 2013; and Mohsen Abdel Massih, who played for the Ismaily club in the 1980s. But the three never got to play for the national team.

Hany Ramzy explained during an interview on Al-Harrif talk show on the DMC Sport channel last April that the reason for this is twofold: Christian families discourage their children from soccer, and coaches are reluctant to take them in anyway.

In August 2016, the US-based Coptic Solidarity organization filed complaints with the International Olympic Committee and FIFA regarding Egypt’s systematic religious discrimination against Coptic athletes, which has prevented them from competing at the national and international levels.

In August 2016, the expulsion of Coptic Mina Essam by Captain Ikrami Al Shahat at Al Ahly club sparked a controversy in newspapers and social networking sites. Essam, 13, took several goalkeeping exams with Al Ahly club where he scored well. However, when he went to participate in a new exam, his name was not on the list at the gate, so he could not enter the club and take the exam. The child’s father sued Al Shahat for discrimination.

In March 2016, another Christian child, Tony Atef, was allegedly discriminated against during the exams of Al Ahly club. According to his brother Bishoy, after Tony passed the exams, he went to register his name on the list of the players who successfully passed the exams, but the official there pointed to his wrist where there was a cross and refused to register Tony’s name.

After controversy on social media, Al Ahly apologized implicitly and authorized Tony to pass the exams.