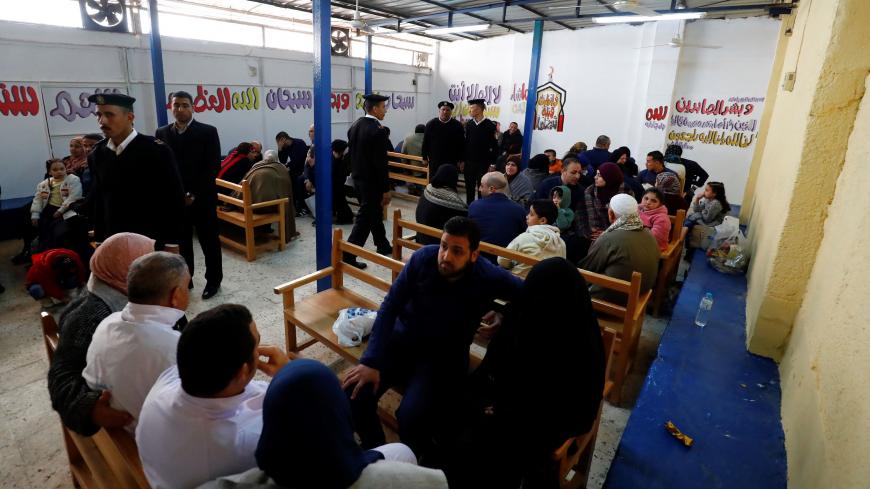 Prisoners meet with their relatives during a visiting session at Tora prison on the southern outskirts of the Egyptian capital, Cairo, on Feb. 11, 2020. Many rights activists have been imprisoned in Tora. The photo was taken during a guided tour organized by Egypt's State Information Service. - KHALED DESOUKI/AFP via Getty Images

The United States joined 30 other countries on Friday to express concern over “the trajectory of human rights in Egypt” and the Egyptian government’s use of counterterrorism laws to crush peaceful dissent.

“We draw particular attention to restrictions on freedom of expression and the right to peaceful assembly, the constrained space for civil society and political opposition, and the application of terrorism legislation against peaceful critics,” read the letter, which was delivered on Friday by Finland at the UN Human Rights Council's 46th session.

The signatories, which included Australia, Canada and mostly European countries, also called on Egypt to lift its travel bans and asset freezes against human rights defenders. The letter specifically mentioned restrictions on the staff at the Egyptian Initiative for Personal Rights, whose members were released from prison following an international outcry in December.

The joint declaration Friday was praised by human rights groups who have documented torture, forced disappearances and extrajudicial killings at the hands of Egyptian security forces, as well as the jailing of tens of thousands of government critics since President Abdel Fattah al-Sisi came to power in 2013.

“Today's declaration sends a clear message to the Egyptian authorities that the world will no longer turn a blind eye to their relentless campaign to crush peaceful dissent,” said Kevin Whelan, Amnesty International's representative to the UN in Geneva.

“The March 12 declaration ends years of a lack of collective action at the UN Human Rights Council on Egypt,” said Bahey Hassan, director of the Cairo Institute for Human Rights Studies.

Since the last such joint declaration was delivered at the council in 2014, the situation for human rights has worsened considerably. Last month, Human Rights Watch and 21 other organizations accused Egypt’s security forces of targeting the relatives of exiled dissidents with “unlawful home raids, arbitrary arrests, enforced disappearances, and prolonged detention of family members without trial or charges.”

US Secretary of State Anthony Blinken told his Egyptian counterpart last month that human rights will be “central” to the US relationship with Egypt, a country that receives roughly $1.3 billion in US military assistance per year. The Biden administration has faced criticism for approving the sale of nearly $200 million worth of naval surface-to-air missiles to Cairo despite promising “no more blank checks” for Sisi’s government.