For the first time, the Biden administration targets alleged IRGC interrogators over inhumane detention of protesters. 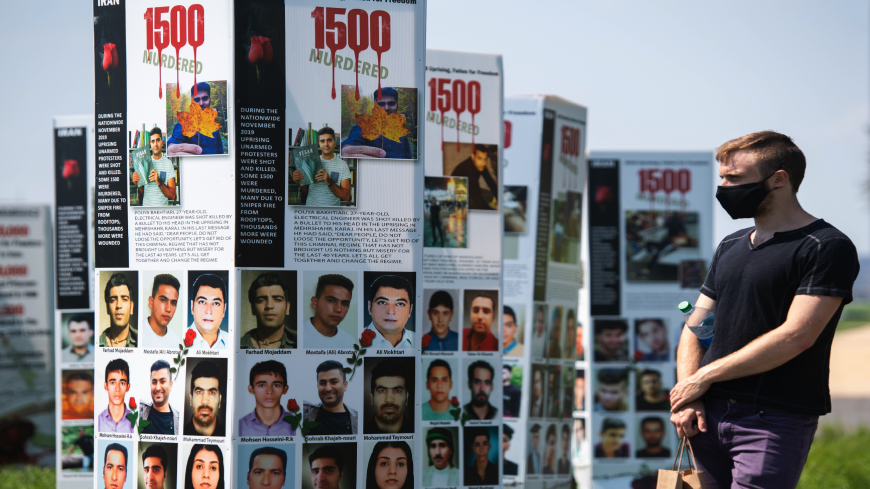 A man walks past some of the thousands of photos of people killed in Iran during the 1988 massacre of political prisoners as well as during more recent anti-regime uprisings, during a photo exhibit by the Organization of the Iranian American Communities to highlight human rights violations by the country, near the US Capitol in Washington, DC, Sept. 4, 2020. - SAUL LOEB/AFP via Getty Images

Ali Hemmatian and Masoud Safdari and their immediate families are barred from entering the United States for their alleged involvement in “torture and/or cruel, inhuman or degrading treatment or punishment” of protesters detained during the 2019-2020 demonstrations that swept across Iran, according to a statement by Secretary of State Antony Blinken.

The move marked the US government’s first new penalty against Iranian officials since President Joe Biden took office in January.

Despite objections from Iranian leaders, the new administration has maintained economic sanctions imposed by the former Trump administration after it abandoned the 2015 nuclear accord with Tehran.

American officials on Tuesday offered no insights as to why the alleged IRGC interrogators were being hit with the travel bans now.

“The United States is committed to promoting accountability for those responsible for human rights violations and abuses. That includes in Iran,” State Department spokesperson Ned Price told Al-Monitor’s Elizabeth Hagedorn during a press briefing on Tuesday.

The penalties came on the 14th anniversary of the disappearance of Mark Levinson, a former FBI and DEA agent who disappeared while visiting Kish Island off Iran’s southern coast while on an intelligence-gathering mission for the CIA in 2007.

The administration of former President Donald Trump late last year sanctioned two Iranian Interior Ministry officials who it believed were likely involved in the “disappearance and probable death” of Levinson.

The new travel restrictions also come as the Biden administration is increasingly signaling disapproval for Tehran’s posturing ahead of a planned return to negotiations to revive the 2015 nuclear deal known as the Joint Comprehensive Plan of Action.

Despite, or perhaps because of, the US military’s deterrence efforts in the Persian Gulf region and the State Department’s diplomatic push to end Yemen’s civil war, Iran-linked groups have continued to launch rocket, drone and missile attacks on civilian infrastructure in Saudi Arabia and military bases in Iraq.

Biden administration officials have stopped short of directly implicating Iran in the attacks but have warned that Tehran will be held accountable for the actions of its proxy militias in the region.

During a meeting of the UN Human Rights Council in Geneva on Tuesday, US officials expressed concern about allegations of the Iranian government’s human rights abuses against its own citizens, including “unjust detention of far too many people in deplorable conditions,” according to Blinken’s statement.