The US government believes Mohammad Baseri and Ahmad Khazai were involved in the abduction, detention and probable death of the retired FBI agent. 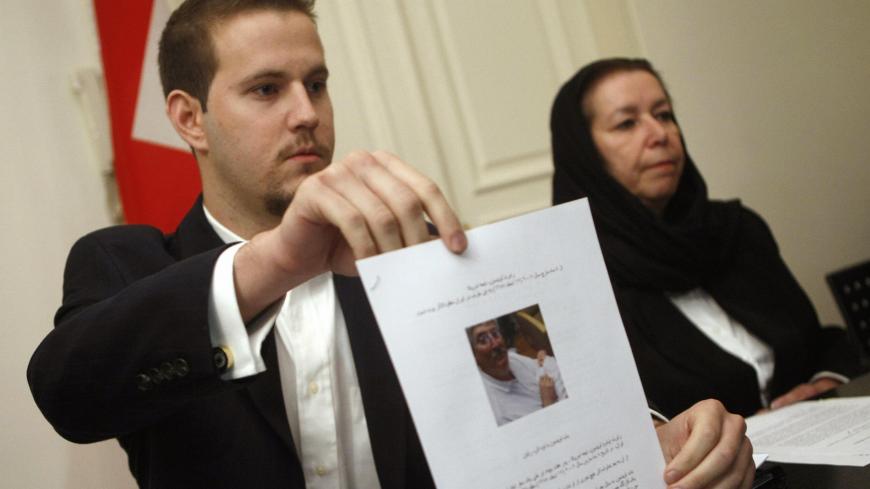 Daniel Levinson (L) shows a picture of his father, ex-FBI agent Robert Levinson, holding his grandson Ryan during a press conference with his mother, Christine, at the Swiss Embassy in Tehran, Dec. 22, 2007. - BEHROUZ MEHRI/AFP via Getty Images

The United States on Monday sanctioned two Iranian intelligence officials over the kidnapping and detention of Robert Levinson, a retired FBI agent who vanished nearly 14 years ago in Iran and is believed to have died in regime custody.

The US Treasury Department blacklisted Mohammad Baseri and Ahmad Khazai, two high-ranking Iranian Ministry of Intelligence and Security officials, in what marked the first public actions the US government has taken against the Iranian government over Levinson, the longest-held hostage in American history.

“Iranian leaders have lied over and over again about what happened to Mr. Levinson, and that continues to this day,” a senior government official said on a call with reporters Monday. “The US will no longer accept Iranian excuses for what they know they have done to Mr. Levinson.”

Levinson disappeared on Iran’s remote Kish Island in March 2007 during an unauthorized CIA mission that the US government for years claimed was a private business trip. He hasn’t been seen or heard from publicly since then, and the Iranian government denied holding the veteran agent in its custody.

But in 2010 and 2011, unknown captors sent the family proof-of-life videos and photos, showing a haggard Levinson wearing a Guantanamo Bay-like orange jumpsuit and pleading for help. Last year, the US State Department offered a reward of up to $20 million, in addition to the $5 million already offered by the FBI, for information on the whereabouts of the father of seven.

In March, the Levinson family announced in a statement that the US government believed Levinson had died sometime before the COVID-19 outbreak in Iran. His remains have not been recovered.

Officials said all available evidence points to Levinson’s likely death in Iranian custody, but they could not provide specifics on that assessment without risking sources and methods. The investigation into his "probable death" is ongoing, they added, and the administration is hopeful that the naming of Baseri and Khazai will encourage others to come forward with information.

“We’re hoping today’s designation puts the responsibility squarely on the Iranian regime for the first time, and these two senior officers,” a senior government official said Monday. “We hope this gives Bob’s family some of the answers they deserve.”

Asked why the administration waited until its waning days to publicly identify the Iranians believed responsible, US officials cited the time it takes to compile evidence and for lawyers to give their approval in such a complex case.

The Trump administration has ramped up its campaign of sanctions since the election, in what critics say is an attempt at boxing in the next president. If Tehran returns to strict compliance under the nuclear deal, President-elect Joe Biden had pledged to renter the landmark pact as a starting point for follow-on negotiations.

“We all expect a negotiation next year. That negotiation must include the return home of all the Americans unjustly detained in that country,” a senior government official said.

The US government is also pressing Iran to release a number of Americans held on political grounds. Dual-citizens Morad Tahbaz and Siamak and Baquer Namazi are currently detained in the country on charges widely dismissed as baseless.

Iran drew international condemnation over the weekend for hanging Rouhollah Zam, a dissident Iranian journalist convicted of "corruption on earth." On Sunday, an Iranian court convicted British-Iranian anthropologist Kameel Ahmady of “collaborating with a hostile government” and sentenced him to nine years in prison.