The administration's revocation of the Houthis' terrorist designation has been met with further missile strikes. 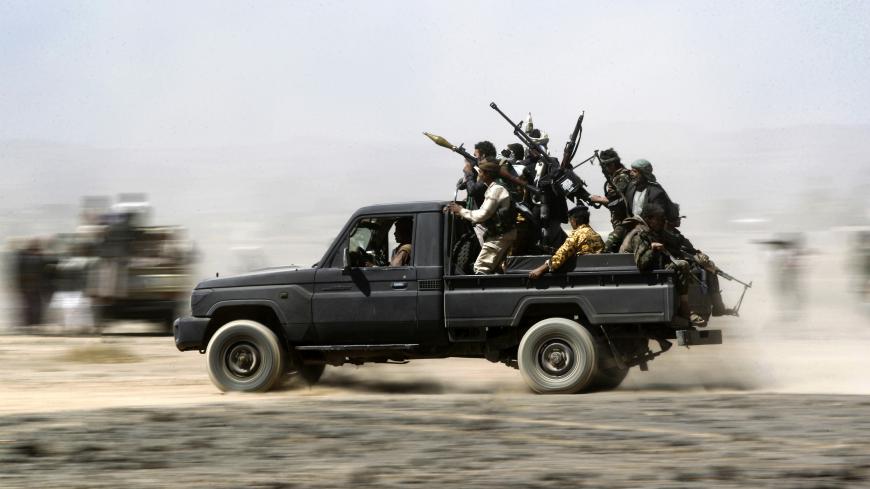 Armed Yemeni tribesmen loyal to the Shiite Houthi rebels sit in the back of an armed vehicle during a gathering to mobilize more fighters into several battle fronts on Nov. 1, 2016 on the outskirts of the capital Sanaa. - MOHAMMED HUWAIS/AFP via Getty Images

Mansur al-Saadi, the head of the Houthis’ naval forces, and Ahmad Ali Ahsan al-Hamzi, head of the rebels’ air force, were sanctioned on Tuesday for “procur[ing] weapons from Iran and oversee[ing] attacks threatening civilians and maritime infrastructure,” the State Department announced today.

The United States accused the rebel officials of orchestrating attacks that have impacted “Yemeni civilians, bordering nations and commercial vessels in international waters” on behalf of “the Iranian regime’s destabilizing agenda,” according to a US Treasury statement.

Al-Saadi is also alleged to have overseen smuggling of Iranian weapons into Yemen and “mastermind[ing] lethal attacks against international shipping in the Red Sea.” Houthi forces under al-Hamzi’s command, the Treasury said, “have carried out targeted UAV strikes.”

Why it matters:  The new US administration is shifting its tone toward the Houthis after an initial conciliatory gesture in a bid to end Yemen’s civil war.

Last month the United States revoked a terrorist designation for the Houthis, a move Gen. Frank McKenzie, the head of US forces in the Middle East, called an act of “good will” to convince the rebels to engage in peace talks to end the war.

“I think we’ve put some chips on the table,” McKenzie said, adding that the next steps lie with the Houthis and their Iranian backers.

Instead, a recent string of Houthi missile and drone attacks on neighboring Saudi Arabia continued. On Saturday, the kingdom announced it had intercepted yet another ballistic missile over the capital, Riyadh.

Meanwhile in Iraq, rocket attacks by suspected Iran-linked militias have struck Baghdad and local military bases in recent weeks. The Biden administration initially avoided pointing the finger at Tehran, but following an Iraqi-led investigation, retaliated last week with an airstrike on an outpost used by Iran-backed militias in Syria.

Having vowed to hold Tehran accountable for the actions of its proxies in the region, the US administration is now publicly linking the two, accusing the newly sanctioned Houthi leaders receiving training in Iran.

On Sunday Iran rejected a proposal to meet with US and European Union representatives in direct talks.

Though Western officials are optimistic that talks will be held in some form, Tehran continues to demand the United States relieve all sanctions imposed by the previous administration before Iran returns to compliance with the 2015 nuclear deal.

The Biden administration may be reluctant to acquiesce because the United States will need some leverage to pursue follow-on negotiations over Iran’s ballistic missile program and support for proxy fighters in Iraq, Syria and Yemen.

Meanwhile, sabotage attacks continue in the region. Yesterday Israel’s Prime Minister Benjamin Netanyahu blamed Iran for an explosion aboard an Israeli-owned cargo ship in the Gulf of Oman. The United States has also blamed similar maritime shipping explosions on Tehran.

Know more:  Despite removing the Houthis’ terror designation, the Biden administration shows no sign of approval for the rebels’ behavior and has condemned their ongoing offensive against Marib. The United Nations sanctioned a senior Houthi criminal investigator this week, accusing him of overseeing violent crimes against women.