The Pentagon aims to bolster partnerships in North Africa with the African Lion exercise this summer. 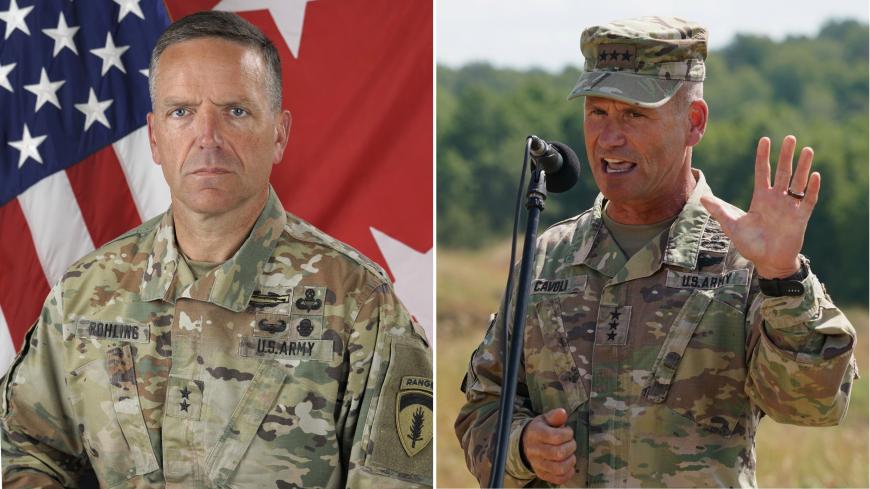 At left, US Maj. Gen. Andrew Rohling, head of the Southern Europe Task Force, is seen in 1 2018 photo. At right, Gen. Christopher Cavoli, European commander of the US Army, talks with soldiers during the Defender-Europe 20 joint military exercise at Drawsko Pomorskie training grounds in Poland on June 17, 2020. - US Army Europe (L) / JANEK SKARZYNSKI/AFP via Getty Images

Two senior United States Army commanders will arrive in Tunisia on Wednesday to meet with local officials ahead of a planned multinational military exercise in North Africa.

Gen. Christopher Cavoli, the commander of all US Army forces in Europe and Africa, and Maj. Gen. Andrew Rohling, head of the Southern Europe Task Force, will meet with senior officials in Tunis.

Their visit will be the first official US delegation to North Africa since President Joe Biden took office last month. The trip comes a time when the COVID-19 pandemic has reduced official travel to foreign policy priorities. While there, the commanders will meet with the head of the Tunisian army’s land forces, Gen. Mohamed El Ghoul.

“We’re very excited. Tunisia is an extremely important partner of the United States,” Cavoli told reporters by phone Tuesday, adding, “We’re going to become acquainted with his operations [and] his modernization investment programs.”

The Tunisia visit will be a first for Cavoli, who late last year was named head of the US Army’s forces in both Europe and Africa as the Pentagon moved to merge control over its troops on the two continents amid a shift toward strategic competition with Russia and China.

Relations with Tunisia and its neighbors appear to have taken on renewed importance for Washington officials since the Kremlin introduced sophisticated military hardware into Libya’s civil war last year, including fighter jets, mobile air defenses and radar systems.

That move spurred public concern from US Africa Command that the Kremlin could potentially establish permanent basing in Libya, potentially limiting NATO’s easy access to its southern flank.

Russia’s steady support for Syrian President Bashar al-Assad in his country’s brutal civil war has already ensured Moscow one permanent foothold on the Mediterranean, US officials have said.

The Pentagon sent a specialized military training unit to North Africa last year. Elements of that unit, known as a security force assistance brigade,  will for the first time be coordinating this year’s multinational African Lion exercise.

The exercise currently aims to bring together roughly 10,000 troops from some 20 countries for joint exercises in Senegal, Morocco and Tunisia this summer, but may be scaled back due to the coronavirus pandemic, Rohling noted. Last year’s exercise was canceled due to the pandemic.

The two generals will also visit Tunisia’s special operations command and military institutions, which Washington has supported since the 2011 revolution.

The US has provided hundreds of millions of dollars of military training and hardware sales to Tunisia’s armed forces in recent years. The two countries have also shared intelligence on Tunisian jihadi fighters traveling abroad to join the Islamic State.