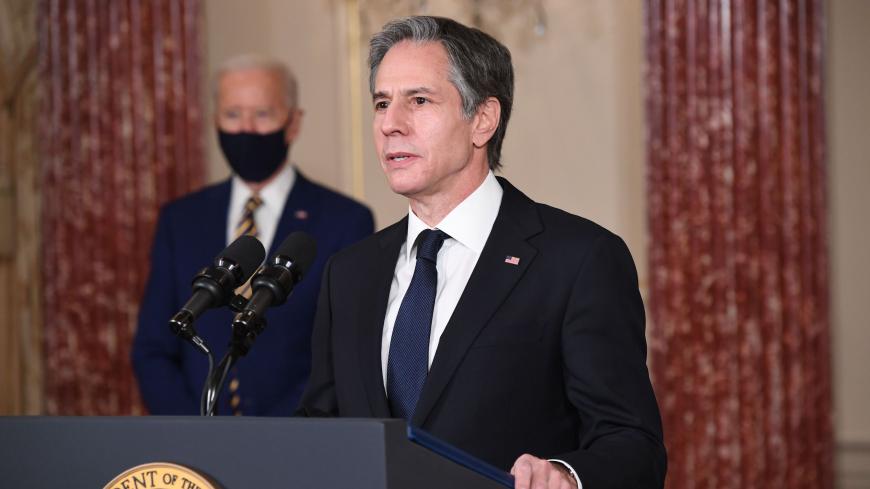 US Secretary of State Antony Blinken speaks to staff at the US State Department during the first visit of US President Joe Biden (L) in Washington, Feb. 4, 2021. - SAUL LOEB/AFP via Getty Images

Secretary of State Antony Blinken announced Wednesday that the United States would seek a seat on the UN Human Rights Council, where Washington would counter what he called the rights body’s “unacceptable bias against Israel."

“I’m here to reaffirm America’s commitment to respect and defend the human rights of all people, everywhere,” Blinken told the 47-member body in a video.

Earlier this month, the Biden administration announced it had rejoined the council as an observer, in keeping with the president’s pledge to put human rights at the forefront of his foreign policy. The US will run for a three-year, full-member seat on the council during elections held by the wider UN General Assembly in October.

"Institutions are not perfect," Blinken said. "As the United States reengages, we urge the Human Rights Council to look at how it conducts its business. That includes its disproportionate focus on Israel."

America’s top diplomat called on the Geneva-based body to abolish Agenda Item 7, which requires that Israeli violations in the Palestinian territories be discussed at every meeting. Israel, which is regularly condemned in resolutions put forward by the council, is the only member state whose rights record is a permanent agenda item.

The Trump administration withdrew from the rights council in 2018, in part over what Nikki Haley, then the US ambassador to the United Nations, described as the council’s “chronic bias against Israel.”

Blinken’s comments come days after his phone call with Israeli Foreign Minister Gabi Ashkenazi. The secretary on Monday “emphasized the Biden administration’s belief that the two-state solution is the best way to ensure Israel’s future as a Jewish and democratic state, living in peace alongside a viable and democratic Palestinian state,” according to the US readout of the call.

President Joe Biden waited nearly a month to reach out to Prime Minister Benjamin Netanyahu in what was seen as a sign of his tougher approach to Israel compared with his predecessor. Although Biden intends to build on the Abraham Accords, which normalized relations between Israel and several Arab countries, his administration is expected to roll back a number of Trump-era policies that critics said undermined the changes of a two-state solution to the Israeli-Palestinian conflict.

The Biden administration plans to resume relations with Ramallah and restore aid to the Palestinians, but the US Embassy — which Trump controversially moved from Tel Aviv — will remain in Jerusalem.