Turkey’s risk premium has sharply decreased over the past several months, but an array of economic and political factors threatens to undo the trend. 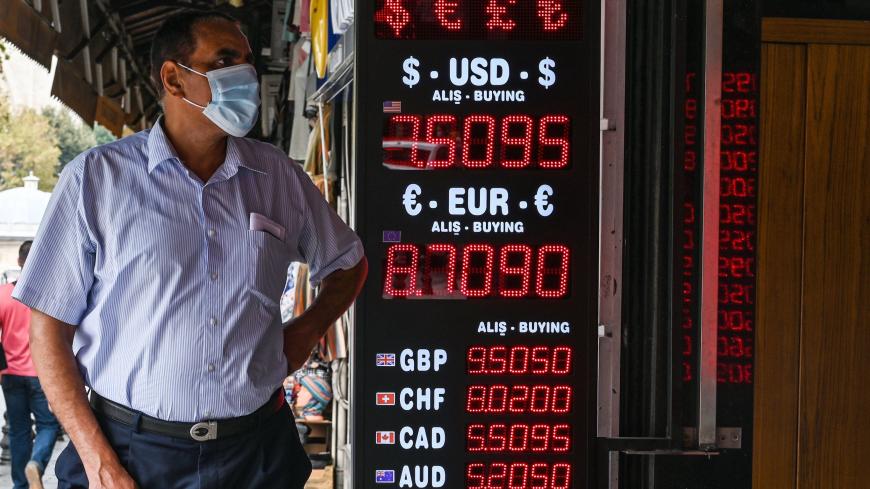 A man waits in front of a currency exchange agency as a screen shows rates near the Grand Bazaar in Istanbul Sept. 24, 2020. - OZAN KOSE/AFP via Getty Images

Turkey’s risk premium has significantly eased since Ankara abandoned a much-criticized interest rate policy to salvage its crisis-hit economy in November, but the downtick could well reverse down the road amid ongoing economic and political issues, including Turkey’s thorny ties with the United States and Europe.

The risk premium — a major indicator that foreign investors consider before putting money in a given country — is reflected in credit default swaps (CDS), which are essentially financial deals that determine the cost of insuring exposure to a country’s sovereign debt. The higher a country’s CDS premium, the higher its borrowing costs, as the CDS premium inevitably adds to the price of borrowed money in addition to interest rates.

Turkey’s risk premium stood at about 275 basis points in February 2020 before COVID-19 officially arrived in the country the following month. It hit nearly 600 bps by October as the pandemic wreaked havoc on the already ailing Turkish economy, and Ankara insisted on keeping interest rates low despite the slump of the Turkish lira and rising inflation. In an abrupt move that reversed that policy, Ankara replaced its Central Bank governor and treasury and finance minister in November. Since then, Turkey’s risk premium has decreased, easing to about 290 bps in the first week of February. Still, Turkey’s risk premium remains well above those of peer emerging economies.

The specter of a renewed surge can hardly be ignored as the country’s economic and political fragilities threaten to deepen.

While interest rates have fallen close to or even below zero in some countries, Turkey’s high risk premium means that cash-strapped Ankara has to borrow on interest rates of about 5%. In January, for instance, the treasury issued 5- and 10-year dollar-denominated international bonds with yields of 4.9% and 5.95% per year, respectively.

Just like foreign exchange rates, CDS premiums are swayed by supply and demand, meaning that it is market actors who gauge the risk. The yields of five-year US Treasury bonds and past and present indicators form the basis on which a country’s CDS premium takes shape. For stable economies, CDS premiums are typically in the lower double digits, while those above 300 bps speak of extremely fragile economies.

Turkey’s risk premium has averaged above 300 bps since 2018, in sharp contrast to the early years of the Justice and Development Party (AKP), which has ruled Turkey for 18 years. In 2008, during the global financial crisis, the country’s risk premium averaged 302 bps before decreasing again in ensuing years. In 2018, however, Turkey transitioned to an executive presidency system that accorded sweeping powers to President Recep Tayyip Erdogan, marking an uptick in the country’s fragilities and thus its risk premium.

The lira nosedived in the second half of 2018 amid a crisis with Washington over the detention of an American pastor in Turkey, leading the Central Bank to hike interest rates by 7.5 percentage points. The country’s risk premium averaged 302 bps in 2018, soaring as high as 450 bps during the year. In 2019, the risk premium averaged 372 bps despite monetary tightening in the first half and a relative economic revival in the second half following rate cuts. The risk premium was on the decline in the first two months of 2020, but the economic impact of the pandemic drove it to a staggering 589 bps by April. Turkey’s economic woes only worsened in the ensuing months, with the lira plunging to record lows and the risk premium soaring to nearly 600 bps.

It was in such an alarming climate that Ankara replaced the Central Bank governor and the treasury and finance minister in early November. The Central Bank followed up with chunky rate hikes later in the month and in December, which reversed the uptick in the country’s risk premium.

Though the risk premium has now fallen below 300 bps, it remains largely decoupled from those of peer economies. South Africa’s risk premium is the closest at 70 bps lower, while those of Brazil and Russia are 140 and 200 bps lower, respectively.

It seems premature to hail the downtick as a promising sign for the future. Economic actors both at home and abroad have welcomed the Central Bank’s monetary tightening, but few are confident that this policy will continue or that Erdogan will not intervene with interest rates again. Turkey’s year-to-year inflation rate hit an alarming 15% in January and unemployment remains high amid deepening poverty, all keeping the risks alive.

The economic turmoil, coupled with Ankara’s mediocre performance in containing the pandemic and inoculating the population, is nourishing social unrest and popular frustration with Erdogan’s government. It is clearly worried about losing popular support and displays a growing authoritarian propensity almost on a daily basis.

Erdogan is well aware that he needs Western financial resources to revive the economy and thus feels pressure to mend his credibility in Western eyes — not only in terms of economic management but also in terms of respect to the rule of law. Yet, the steps required to improve Ankara’s abysmal record on basic freedoms, fair trial and tolerance of dissent are not to the liking of Erdogan’s ally, the Nationalist Movement Party (MHP).

Squeezed between the MHP and the need for reform, Erdogan has yet to come up with a solution to stop the erosion in his popular support. In the meantime, the government is doing what it knows best: demonizing its opponents and fueling polarization in a bid to consolidate its voter base. In the most recent example, the government has been cracking down on and vilifying students and academics protesting the appointment of an AKP loyalist as president of Bogazici University, one of Turkey’s top educational institutions.

The European Union and the new US administration are closely watching whether Erdogan will go through with his pledges of reform. Fresh Western sanctions against Turkey in the coming weeks might send the country’s risk premium rising anew and defer the expected upgrades of Turkey by credit rating agencies such as Fitch, Moody’s and Standard & Poor’s.

In sum, the decrease in Turkey’s risk premium has come as a ray of hope, but it might prove short-lived as other downsides remain unresolved. In fact, the factors threatening to reverse the downtick appear stronger than the prospect of lasting improvement, at least for now.