The controversial Geert Wilders has had spats with the Turkish government before amid wider crises between Turkey and the Netherlands. 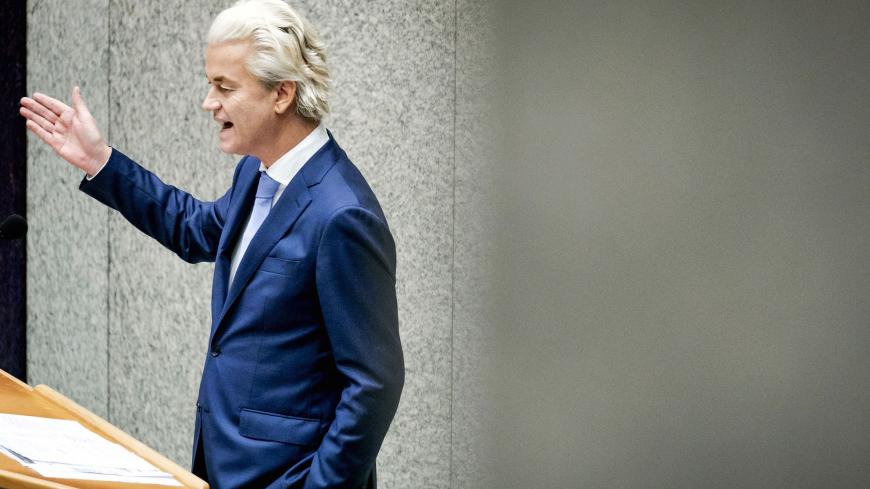 Leader of the Dutch far-right Party for Freedom Geert Wilders speaks during a debate about the beheaded French history teacher Samuel Paty at the House of Representatives in The Hague, Netherlands, on Nov. 12, 2020. - SEM VAN DER WAL/ANP/AFP via Getty Images

The Turkish government and a far-right Dutch politician are in a row over a tweet portraying the Turkish president as a terrorist and Islamic State (IS) supporter.

On Monday, Dutch lawmaker Geert Wilders tweeted a picture of Turkish President Recep Tayyip Erdogan’s face on a Turkish flag and the IS flag. “Terrorist,” he wrote in the tweet.

Wilders is the leader of the Party for Freedom and a member of the Dutch House of Representatives. He is known for his criticism of Islam. He has called for the Islamic holy book the Quran to be banned in the Netherlands and regularly speaks out against Muslim immigration and the “Islamization” of the country. Wilders is regularly accused of bigotry against Muslims for his views. He has been under round-the-clock police protection since 2004 due to threats.

Turkish prosecutors filed an investigation into Wilders for the tweet, alleging that it constituted an “insult.” Many Turkish politicians were angered by the tweet. Vice President Fuat Oktay called Wilders “Europe’s spoiled child.” Omer Celik, the spokesman for Erdogan’s Justice and Development Party, said Wilders is a “fascist,” the state-run Anadolu Agency reported Tuesday.

Wilders dismissed the investigation in a subsequent tweet Tuesday, accusing the Turkish head of state of “totalitarianism.”

“Freedom of speech is a concept unknown by dictator #Erdogan," said Wilders on the social media network. “Don’t criticize him or you will be investigated and prosecuted.”

Turkey has taken legal action against Wilders before. Erdogan sued Wilders for calling him a terrorist in October.

Turkish-Dutch relations in general have been tense in recent years. In 2017, Turkish politicians attempted to hold political rallies in the Netherlands targeting the Turkish diaspora. The Dutch government opposed this, which created a diplomatic crisis and led to several retaliatory measures from Ankara. Wilders himself protested outside the Turkish Embassy at the Hague at the time.

The feud continued after that. The Netherlands withdrew its ambassador from Turkey in 2018. The ambassador later returned.