UN human rights experts are pressing Great Britain, France, Iran, Russia, Turkey, the United States and 51 other countries to repatriate nearly 10,000 of their citizens associated with the Islamic State. 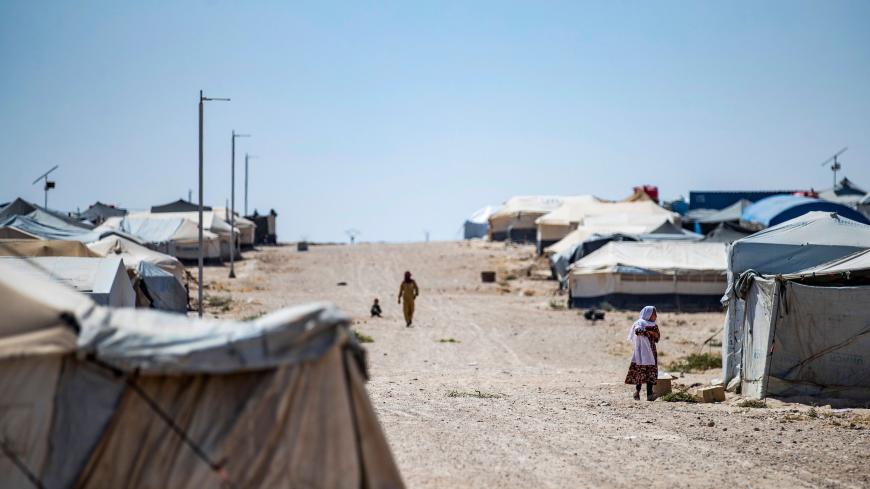 People walk past tents in the Kurdish-run al-Hol camp in Hasakah province in northeastern Syria on Aug. 25, 2020. - DELIL SOULEIMAN/AFP via Getty Images

Human rights experts for the United Nations have called out more than 50 countries for failing to repatriate thousands of women and children associated with the Islamic State who are stranded in camps in northeast Syria.

The list of 57 countries includes Great Britain, China, France, Iran, Lebanon, Russia, Turkey and the United States. Referred to as a “list of shame” by one UN special rapporteur, the states have failed to bring home people living in camps that are facing deteriorating security and humanitarian situations. Treatment that borders on torture or being degrading is said to be rampant at the camps, a UN report found.

"The number of countries concerned and the disastrous humanitarian conditions in the camps highlight the need for collective, sustained and immediate action to prevent irreparable damage to people in vulnerable situations who are being held there," human rights experts at the UN said in a statement.

The UN Office for the Coordination of Humanitarian Affairs in Syria estimates that about 10,000 foreigners still live in camps such as al-Hol in northeast Syria, which houses over 64,000 people.

An unknown number of people have died due to the conditions, said Fionnuala Ni Aolain, the UN’s special rapporteur on protecting human rights while countering terrorism.

In October, Kurdish authorities in charge of al-Hol said they would free 24,000 Syrians. The effort, however, has moved slowly and so far only 800 have left the camp. Observers also warned that the release could help the Islamic State regain territory in the region.

Some governments have been reluctant to repatriate citizens because of the security risk they pose. Since the US-led coalition forced the Islamic State out of its last stronghold in Baghouz, Syria, in March 2019, the debate on repatriation has fallen from the global radar. There is also the mounting challenge of reintegrating these individuals once they arrive home.

Despite these challenges, some countries have attempted to bring citizens home. In December, Germany and Finland repatriated five women and 18 children. Upon arrival at Frankfurt Airport, one of the women was arrested on suspicion of being an Islamic State member, among other crimes, according to Germany broadcaster SVR. The children were not allowed to return to Germany by themselves because it is not legally possible to repatriate children without their mothers, German Foreign Minister Heiko Maas said.

Lorenzo Vidino, the director of George Washington University’s Program on Extremism, said, “There is, generally speaking, a consensus on the moral duty to repatriate the children irrespective of the difficulties that come with that.”

UN-appointed human rights investigators reported “appalling” conditions in the camps in September. In addition, UN experts expressed concern at a “highly personal” data collection process that took place in the camps in July.

Women and children were asked for personal data in an environment where consent could not be freely given, the experts said. It was also not clear who would have access to this data and how it might be used.

“We fear that this exercise was in fact aimed at identifying third country nationals who may pose a security risk,” read a statement by the independent experts appointed by the Human Rights Council. This information “could be further communicated and used by states of origin, as a basis for deciding the further course of action for their nationals.