Regime-affiliated authorities in Syria’s central province of Homs are threatening shopkeepers to reopen their shops or risk confiscation of their properties by the regime. 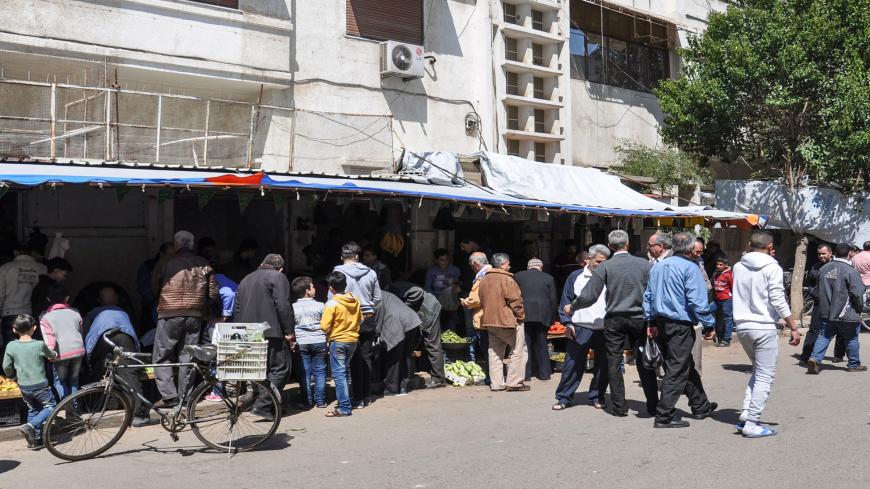 Syrians buy produce and foodstuffs at a market in the central and third-largest city of Homs, Syria, April 7, 2017. - Stringer/AFP via Getty Images

ALEPPO, Syria — The government-affiliated Homs Governorate Council recently gave the owners of the shops located in Homs city center a two-month deadline to reopen their shops that had been destroyed during the war.

On Jan. 24, Al-Watan daily, a newspaper close to the Syrian regime, quoted a source at the Homs Chamber of Commerce as saying, “The [Homs] council held successive meetings in the past period with merchants and neighborhood committees during which it called on them to return to the shopping district following its rehabilitation. In case they fail to do so, the council threatened to open the shops themselves. During the last meeting, they were given a two-month deadline to arrange their affairs and reopen their shops.”

The source added, “The shopping district in Homs city center is ready to resume activity as more than 70% of the rehabilitation works have been completed since the reconstruction campaign was launched four years ago in cooperation with the United Nations Development Program, the Homs Chamber of Commerce, the government service institutions and the local community.”

Ghazwan al-Nakdali, an activist and member of the Syrian Association for Citizens’ Dignity (SACD), told Al-Monitor, “The threats leveled by the Homs council against the shopkeepers reflect the regime’s desire to speed up the commercial district’s recovery.”

He noted that the Homs Chamber of Commerce began promoting the decision, which primarily targets the shops located in the covered market and vegetable market. Ostensibly, the decision serves the regime’s propaganda that it has completed the restoration works of the markets in the old neighborhoods of Homs and brought them back to life after having destroyed them in its fighting against the Free Syrian Army (FSA) in the early years of the Syrian revolution, he added.

The council ’s decision and threats raise many questions about the fate of closed shops and stores that anti-regime owners abandoned years ago when the residents were displaced in early July 2014. The markets the provincial council approached are located in the neighborhoods that the FSA had held in 2012-13 and where fierce battles raged between the warring sides. They were bombed with various types of weapons and besieged by the regime forces that displaced their residents of these massively destroyed neighborhoods.

Aisha Sapri, a journalist for Aram Media Network, told Al-Monitor, “The Homs Governorate Council is pressuring shopkeepers to open their shops in the Naoura, Abu Aouf and Bab Houd markets, the covered market and other shops in the city center that were severely damaged during the fighting between the FSA and regime forces in 2012 and 2013. The decision requires the owners to open their stores by a certain date or else their stores would be seized.”

She said, “The decision would make it easy for the regime to seize the shops whose owners are against the regime and are displaced. A large number of the residents of Homs’ old neighborhoods have been displaced. The regime officials want to steal the displaced’s properties in a way that would seem legal. Those who do not want their properties to be confiscated will need to either bribe the council’s officials or risk their lives and that of their family by returning to Homs — which the regime forces and its security branches control — so as to open their shops out of fear of losing them.”

Sapri added, “The council’s decision consists of pressure placed by the Assad regime on the shopkeepers and aims to limit their options. The vast majority [of shopkeepers] were forcibly displaced and are afraid to return to the regime areas. They might consider selling their stores out of fear that the regime seizes them, and subsequently they would accept to sell them at a very low price to the warlords in Homs. These are mostly close to the Iranian forces and militias’ commanders, whose members are mostly Alawite and Shiite. The regime continues to work on a demographic change in Homs. It did not content itself with displacing Sunni Syrians from Homs. It also wants to take their real estate, properties and everything that ties them to their city away from them.”

Samer Homsi, a political activist and member of the opposition’s General Political Commission for Homs governorate, told Al-Monitor, “Russia is the one backing such decisions because it seeks the return of refugees and displaced to Homs, as it does in all of the regime-restored areas. This step supports the Russian allegations of facilitating the return of the displaced and guaranteeing their safety and that the regime will not arrest them in case they decide to return. The majority of the displaced do not buy these allegations and do not trust the Assad regime or its allies.”

Mahmoud Jadaan, a media activist displaced from Homs and a member of the Syrian Revolutionaries' Gathering, told Al-Monitor, “The markets that the regime claims having rehabilitated and wants to open are located in the old neighborhoods of Homs and in the vicinity of Khalidiya, Jouret al-Shiyah, Qusour, Qarabis and Baba Amr neighborhoods that are almost totally destroyed. Most of the residents have fled and those who stayed lack basic services such as water, electricity and health services. It is impossible to bring the markets and destroyed neighborhoods back to life at present. Also, who would guarantee safety for those displaced who decide to return and open their stores? I know a lot of people who were arrested by the regime when they returned to Homs in the past years.”

Rami Kasam, a lawyer and member of SACD, told Al-Monitor, "The council’s decision serves the regime’s propaganda that life has returned to the devastated areas, the economy is steadily advancing and that the shopkeepers in Homs are back and that all displaced residents willing to return are allowed in. Such allegations are deceptive. Through this decision, the regime seeks to steal the properties of the anti-regime displaced that it targets.”