2020 was a deadly year for people fleeing Libya for Europe, according to data from the UN's International Organization for Migration. 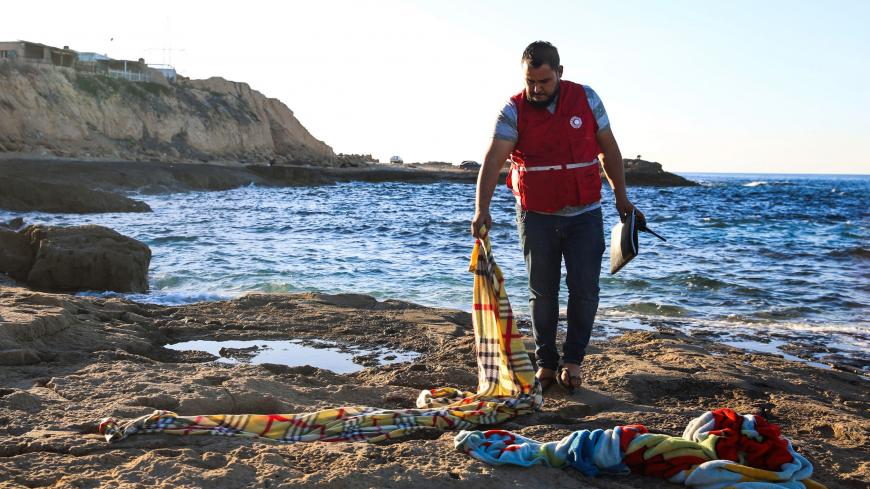 A member of the Libyan Red Crescent checks blankets in which the bodies of drowned migrant children had been wrapped on the shore of Zawia, west of the Libyan capital, Tripoli, on Dec. 16, 2020, after the corpses were transported to a nearby hospital morgue. The bodies of four migrant children between the ages of 5 and 10 were found on the beach following the sinking of a boat carrying 30 people trying to reach Europe, the Libyan Red Crescent said.

Nearly 1,000 people fleeing to Europe by boat from Libya were stopped and sent back to shore this week. People seeking to cross the Mediterranean continue to risk death if they are not stopped by Libyan authorities.

“In 24 hours, more than 1,000 migrants departed from Libya, fleeing dire humanitarian conditions,” the International Organization for Migration said Friday on Twitter. “Over 800 of them were intercepted and returned to shore.”

Libya is a common point of departure for people fleeing the African continent to Europe across the Mediterranean Sea. Some of those coming are from Libya, where there is an ongoing civil war between the UN-backed Government of National Accord and the eastern-based Libyan National Army. The two entities signed a cease-fire in October. People from other African countries have also attempted to flee via Libya.

The Libyan coast guard regularly brings those fleeing back to shore. The naval force returned 80 people to Libya on Jan. 22, according to the migration organization, which is part of the United Nations.

The organization opposes forced returns to Libya and says the country is not a safe point for departure. On Jan. 19, at least 43 people died when their boat’s engine stopped amid poor sea conditions.

A total of 780 people died crossing the central Mediterranean, where Libya is located, in 2020. There were also 126 individuals returned to Libya that year. A total of 36,435 people successfully sailed to Italy or Malta, 15,293 of whom departed from Libya, according to the migration organization.