Slim was shot while visiting southern Lebanon. The government has vowed an investigation amid speculation on Hezbollah's alleged involvement. 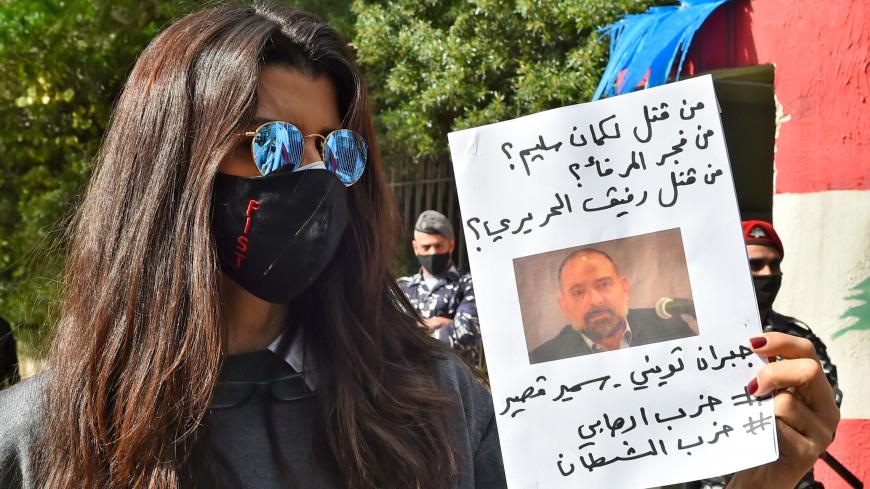 A protester holds a picture of slain prominent Lebanese activist and intellectual Lokman Slim during a rally in front of the Justice Palace in the capital, Beirut, on Feb. 4, 2021, the day he was found dead in his car in the country's south. The placard reads in Arabic, "Who killed Lokman, who blew up the port, who killed [former Prime Minister) Rafik Hariri, [journalist] Gibran Toueini, [author] Samir Kassir, ... the party of terror, the party of Satan." - AFP via Getty Images

A prominent Lebanese intellectual and Hezbollah critic was found shot dead in southern Lebanon on Thursday.

Lokman Slim was visiting friends in the area Wednesday and was due to travel back to Beirut that night. Police found his body in his car near the town of Addoussieh. He received several close-range gunshots, the Lebanese news outlet Naharnet reported.

Slim was a known activist from Lebanon’s Shiite Muslim community. He regularly criticized the Lebanese Shiite political and military organization Hezbollah and mocked the group on social media.

Slim’s family was concerned about him in the hours leading up to the discovery of his body. His wife, German film director Monika Borgmann, tweeted that he had not been answering his phone.

Many Lebanese expressed their condolences about Slim’s death. The Lebanese news outlet The Daily Star called him a “daring activist” and an “admired intellectual.” Slim’s name trended on Twitter in both Arabic and English on Thursday.

Slim was a critic of Hezbollah’s power in Lebanon. The group formed in 1985 to fight the Israeli invasion of southern Lebanon. Hezbollah receives considerable support from Iran. After the Lebanese civil war, many militias gave up their arms. Hezbollah, billing itself as the “resistance” to Israel, kept its weapons and now exists as a paramilitary group in the country that is arguably stronger than state security forces.

It is unclear who killed Slim, but critics of Hezbollah are pointing fingers at the group. The Saudi-funded Al Arabiya news outlet, which is critical of Iran, reported that Slim was working to help a Hezbollah business associate defect at the time of his death. Hezbollah has not released a statement on the matter.

Lebanese President Michel Aoun has vowed to conduct a speedy investigation into Slim’s murder. Some perpetrators of past political assassinations in Lebanon have not been brought to justice. Nobody was charged in the killing of former minister Mohamad Chatah in 2013, for example.

Hezbollah has suffered assassinations as well. Senior commander Hassan al-Laqqis was also killed in 2013 in an attack claimed by Sunni Islamist groups.

"We also emphasize the need for an expeditious investigation of this and other recent unsolved killings so that the perpetrators of these acts are brought to justice," US Ambassador to Lebanon Dorothy Shea said in a statement, making reference to other political assassinations in Lebanon.

The discovery of Slim’s body came on the six-month anniversary of the horrific Beirut port explosion.