Some Lebanese politicians lamented that the rockets put Lebanon at risk of war and videos of civilians attempting to stop Hezbollah from firing more went viral. 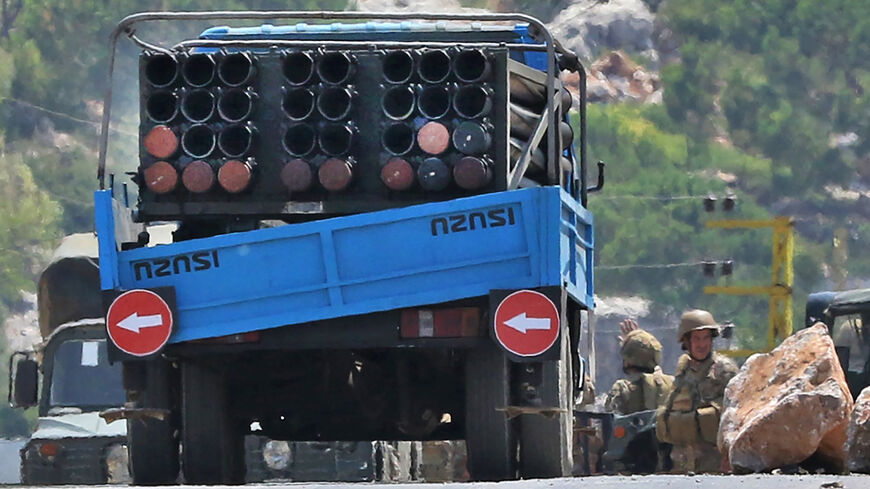 Lebanese soldiers stand next to a confiscated truck carrying a multiple rocket launcher in the southern village of Shouayya, on Aug. 6, 2021. - MAHMOUD ZAYYAT/AFP via Getty Images

Hezbollah said it fired rockets into Israel on Friday, prompting an Israeli response.

A total of 19 rockets were fired from Lebanon into Israel Friday morning. Of them, 10 were intercepted by Israel’s Iron Dome air defense system, six landed in open areas in Israel and three fell short in Lebanon, the Israel Defense Forces said in a series of tweets.

Hezbollah subsequently confirmed it was behind the rockets. The Lebanese political and military organization said the attack was a response to Israel’s recent strikes on Lebanon, according to the Hezbollah-affiliated Al-Manar news outlet.

The IDF said it struck the launch sites in Lebanon in response.

Lebanon’s official National News Agency reported that the rockets originated from Mount Hermon in eastern Lebanon, where Hezbollah has a significant presence. Israeli artillery fire hit near Kfarchouba and surrounding areas in southern Lebanon. Israeli fighter jets also flew over Lebanese airspace, according to the agency.

The Lebanese military said it detained four people for allegedly shooting the rockets.

There have been several recent rocket attacks from Lebanon into Israel. Two rockets were fired on Wednesday from Lebanon into Israel, prompting the IDF to respond with artillery fire. The IDF then carried out airstrikes in Lebanon on Thursday. Similar incidents also occurred in July and May of this year. Hezbollah did not claim the previous attacks, though the group exerts considerable control over the areas of southern Lebanon where the previous rockets came from. Some Lebanese media outlets attributed the May attack to Palestinian armed groups in Lebanon.

Some Lebanese civilians expressed anger at Hezbollah for the attack. Viral videos on social media showed residents stopping a truck full of missiles that purportedly was being used by Hezbollah.

Many politicians also criticized the rocket attacks. Former Prime Minister Saad Hariri said, “Using the south as a platform for regional conflicts, whose results and repercussions are uncalculated, is a step into the unknown that puts entire Lebanon in the crosshairs of the wars of others on its soil.” Lebanese Forces leader Samir Geagea said the cross-border attacks are “playing with fire,” according to the Lebanese news outlet Naharnet.

Hezbollah formed in 1985 to fight against Israel’s occupation of southern Lebanon during the civil war. It receives considerable support from Iran and its fighters are predominantly Shiite Muslims. Hezbollah and Israel have clashed numerous times since the war ended in 1990, including during the 2006 war, which devastated much of southern Lebanon. The United States, Israel and some European states designate Hezbollah as a terrorist organization. Other Lebanese paramilitaries were disarmed after the civil war, but Hezbollah kept its weapons as the “resistance” to Israel.

The UN peacekeeping force in Lebanon called for a cease-fire following Friday’s violence in a statement. “This is a very dangerous situation, with escalatory actions seen on both sides over the past two days,” it read. “We are coordinating with the Lebanese Armed Forces to strengthen security measures throughout the area of operations.”