In response to criticism from the opposition, Turkish President Recep Tayyip Erdogan has defended the record of his son-in-law and former finance minister, sparking a 1% slide in the Turkish lira Monday after weeks of steady gains. 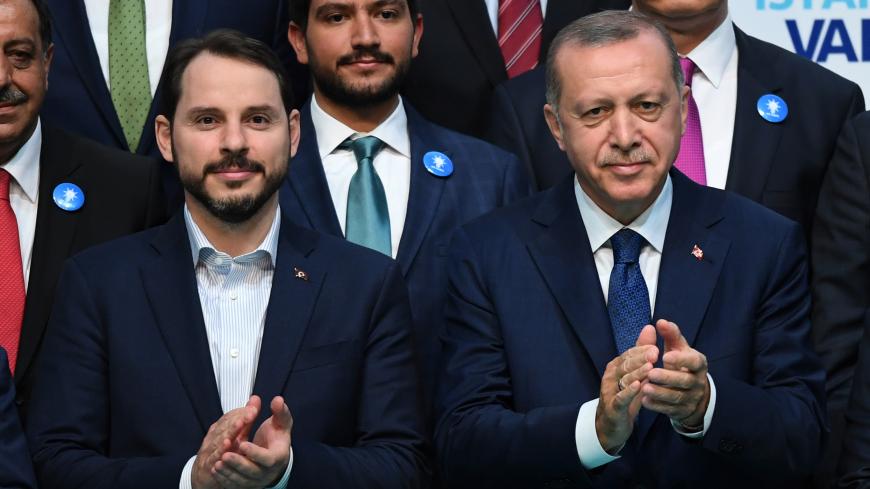 ISTANBUL — Following a five-week rally that saw Turkey’s lira rise 7% against the dollar since the start of the year, the currency slid Monday, losing about 1% amid a political spat in which Turkish President Recep Tayyip Erdogan defended the record of his son-in-law and former Finance Minister Berat Albayrak.

The shakeup comes after Turkey’s main opposition Republican People’s Party (CHP) ran a social media campaign last week criticizing Albayrak for overseeing a steep drop in Turkish foreign exchange reserves over his two-year tenure, which ended abruptly with his resignation in November. The CHP claimed Albayrak, who has remained largely out of public sight since stepping down, spent nearly $130 billion in reserves to support the lira against an economic downturn sparked by the COVID-19 pandemic.

In response, Albayrak broke his four-month silence Saturday via a statement shared by his lawyer that threatened to sue the CHP and other critics for defamation to the tune of 500,000 liras ($71,150), saying the proceeds would go to the families of fallen soldiers. He also linked critics to terror organizations trying to undermine Turkish sovereignty.

“Transactions over the Central Bank’s reserves were carried out in accordance with existing regulations and in line with the goals of financial and price stability, in a manner befitting the balance of payments requirements,” Albayrak’s lawyer said in the statement.

Erdogan later defended the former minister’s policies during a speech in Izmir Monday at a gathering for the ruling the Justice and Development Party. The Turkish leader said Albayrak had carried out his duties within “market rules and laws” to sustain monetary policy goals set out by the party in the face of the pandemic-driven slowdown.

Claiming Albayrak had come under increased scrutiny for his familial ties to the Turkish president, Erdogan said Monday, “His biggest misfortune is that the title of groom has preceded his efforts and background.”

Emre Peker, a director at the Eurasia Group polical consultancy, said the spat comes at a fragile time for Erdogan, who has seen his support waver in recent public surveys as a result of economic hardship and rising food prices across the country.

“When I look at both the lawsuit and Erdogan’s comments, I see a typical attempt to deflect blame and change the conversation with these conspiracy theories, and allegations and unfounded links to terrorism to try and absolve the government of responsibility,” Peker told Al-Monitor.

Foreign investor sentiments toward Turkey have turned more favorable since the November appointments of Lutfi Elvan as finance minister and Naci Agbal to head the Central Bank. Through a pair of key interest rate increases last year, Agbal has sought to restore the bank’s credibility by upholding tighter and more orthodox monetary policy than his predecessor.

Amid the weekend’s exchanges, Elvan also defended Albayrak on Twitter Sunday, saying he condemned the CHP's “unjust and rude rhetoric.”

“It is unacceptable to distort the foreign exchange reserves transactions carried out in line with the goal of financial stability amid the 2020 pandemic circumstances in an environment necessitated by extraordinary fluctuations in the global markets,” Elvan tweeted.

Though the lira made gains under the new economic leadership, prompting the International Monetary Fund to raise its growth forecast for Turkey’s economy to 6% in 2021, Peker said much of the nation’s recent cash inflow is speculative and foreign direct investment continues to lag, as in other countries, due to the pandemic.

Such dynamics, Peker said, have been pushing Erdogan to seek domestic political wins to bolster voter support ahead of scheduled 2023 elections, in which he’ll need at least 50% of the popular vote to extend his 18-year tenure in power.

“It’s not a good picture for Erdogan,” Peker told Al-Monitor. “He knows this and every other week we have a new topic of discussion to try and divert attention, to keep the public occupied and to find the magic formula that will once again push his support above 50%.”