Presidential son-in-law Berat Albayrak has quit as finance minister amid economic turmoil, but most news outlets pretended it didn’t happen. 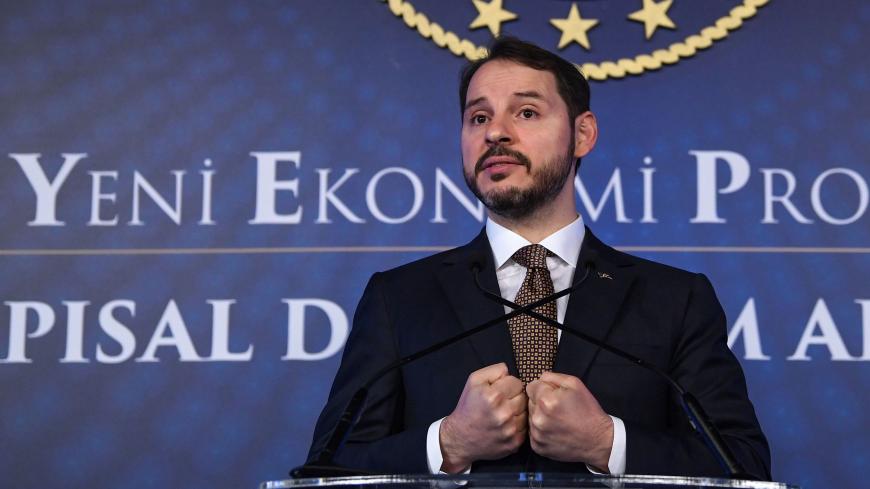 ISTANBUL — If a Turkish minister resigns on Instagram and the news doesn’t report it, did it happen?

That was the riddle confronting Turkey a day after Berat Albayrak, the 42-year-old finance minister who is married to President Recep Tayyip Erdogan’s daughter, said in a letter posted on the photo-sharing platform that he quit due to unspecified health issues and a desire to spend more time with his parents, as well as his wife and children.

All but one mainstream news channel ignored Albayrak’s letter late on Sunday, posted during a time of economic tumult in Turkey. Even the newspaper and TV channels run by Albayrak’s family pretended it didn’t happen — until Erdogan announced he accepted the resignation, more than 24 hours later.

The surprise resignation came one day after Erdogan abruptly sacked the Central Bank governor and replaced him with a loyalist in the middle of the night. The weekend’s chaotic maneuvering comes as fears mount that record losses in the lira currency could unleash Turkey's second financial crisis in as many years.

It also coincides with the election of Joe Biden in last week’s US presidential election and nervous questions in Turkey about how fragile relations between the NATO allies will now evolve, including risks of congressional sanctions for Ankara’s purchase of advanced Russian military hardware and US Treasury penalties against a state bank accused of laundering $20 billion in restricted Iranian funds.

Outgoing President Donald Trump, who has described himself as “a great fan” of Erdogan and reportedly netted more than $1 million from Turkish licensing deals while president, had helped forestall punitive measures. Erdogan has yet to publicly acknowledge Biden’s win.

Despite the uncertainty over who will now steward Turkey’s $700 billion economy, investors cheered the changing of the guard, pushing the lira currency 6% higher on Monday, its best performance in two years. Stocks and bonds also rallied, leading the satirical Zaytung site to joke that financial markets prefer an empty cabinet position to Albayrak.

It remained unclear who would be Turkey’s next finance minister. A statement from the president’s communications office late on Monday said: “After our president’s assessment, Treasury and Finance Minister Berat Albayrak’s request for discharge has been accepted,” and complimented his handling of the economy, rare praise for a departing minister.

The president was widely believed to be grooming Albayrak as his eventual successor, and his supporters on social media speculated he could reemerge in a future cabinet. The US-educated Albayrak promised a nationalist approach to make Turkey less dependent on foreign investment but failed to introduce meaningful reforms, instead alienating international banks by investigating them for critical research and introducing restrictions on their ability to trade, contributing to an exodus of billions of dollars from Turkey this year.

The lira lost almost half of its value during Albayrak’s tenure, and the Central Bank has burned through an estimated $120 billion in foreign currency reserves to prop it up since the beginning of 2019. Inflation is stuck in the double digits and the jobless rate is above 13%, according to government statistics.

“The mistakes don’t belong solely to Albayrak; without Erdogan, these decisions couldn’t have been taken. But markets are now wondering if the government has realized the error of its ways and will begin correcting them,” said Ugur Gurses, a former Central Bank staff member who now writes an economy blog.

Erdogan has made it clear that he is in charge of economic policy in Turkey, especially after his 2018 election as president with vast new executive powers, when Albayrak was promoted from energy minister to economy czar.

Albayrak was reportedly upset that Erdogan appointed Naci Agbal, his predecessor at the Treasury, to lead the Central Bank after firing Governor Murat Uysal less than two years into his term.

Uysal had mostly complied with Erdogan’s orders to keep interest rates low to spur lending and economic growth, though he did raise the policy rate in September and used a complex set of tweaks to make borrowing more expensive. The moves failed to halt the slide in the lira, the world’s worst-performing currency in 2020.

Gurses said Agbal, who remains a member of the ruling party but is generally respected by investors, is more likely than Albayrak to stand up to his boss. “But an independent Central Bank is impossible in the political system that Erdogan has set up,” he told Al-Monitor. “This isn’t a mere economic crisis, but a political crisis stemming from arbitrary, unilateral decisions, the weakening of institutions and the rule of law and the move away from democracy.”

Agbal said on Monday the Central Bank would “decisively use all policy tools in pursuit of its price stability objective,” raising expectations he could return to orthodox monetary policies and convince Erdogan that interest rate hikes are necessary.

That could partially inoculate the economy against damage wrought by US sanctions, should Biden reverse Trump’s stance and punish Turkey for acquiring Russian missiles designed to shoot down NATO jets. More harm could come if New York prosecutors proceed with the case against state lender Halkbank. That indictment indirectly implicated but did not charge Albayrak in the conspiracy.

The leaders of Turkey’s two biggest opposition parties have congratulated Biden and his running mate Kamala Harris, casting Erdogan’s silence on the election in an even starker light. Erdogan is now the only head of a NATO country that hasn’t responded to Biden’s victory. (Slovenia, the native country of Trump’s wife Melania, expressed disappointment that he won.)

“Erdogan and his inner circle bet everything on Trump, as if they had no plan B, and are now unable to manage the fallout” from his defeat, said Aykan Erdemir, a former opposition lawmaker who is senior director of the Turkey program at the Foundation for Defense of Democracies in Washington.

“Under Biden, bilateral relations will be less interpersonal and more institutional … where capacity is severely lacking in Turkey, if the government is unable to formulate even a basic cordial message” on Biden’s election, as well as on Albayrak’s “messy and embarrassing exit,” he told Al-Monitor.

Erdogan may still be watching to see how the final chapter of Trump’s presidency unfolds. The former reality TV star has refused to concede the election and most of his Republican Party has declined to admit he lost.

Erdogan's reticence may be aimed at extracting a few more favors from Trump during his last days in office, but that kind of angling could undermine efforts to begin a fresh chapter with the next US administration, Erdemir said.

Albayrak, who cultivated a personal relationship with Trump’s son-in-law and senior adviser Jared Kushner that he described as “backdoor diplomacy,” may also have been viewed warily by the new administration, he added.

In the meantime, the opposition is warning that Turkey’s economic woes will only worsen amid the political infighting. “We are in the middle of a deep economic crisis. The minister in charge of the economy cannot even manage his own resignation,” Garo Paylan, who is responsible for the economy portfolio of the opposition Peoples’ Democratic Party, tweeted. “Palace intrigues are darkening the future of our 83 million citizens.”