A 2,000-year-old funerary compound in Jerusalem has been marked by controversy since its reopening to the public in 2019. 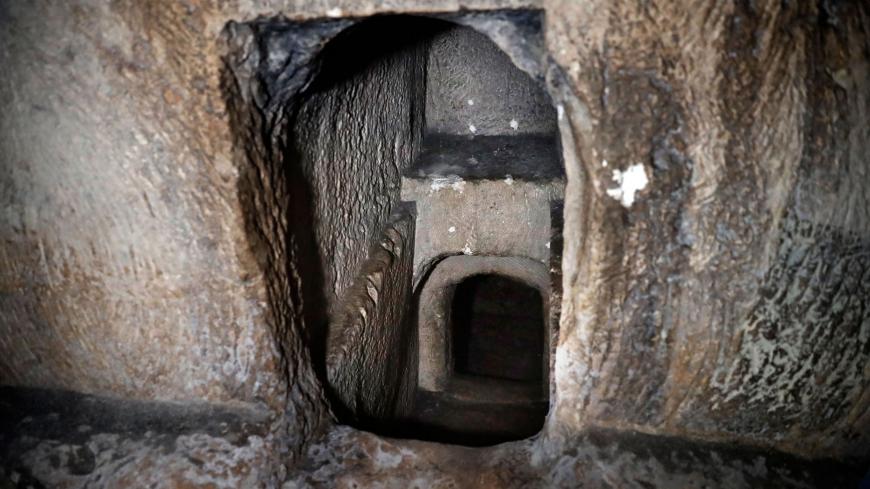 One of the several burial chambers of the Tombs of the Kings, owned and administered by the French Consulate of Jerusalem, is pictured on Dec. 28, 2018 in east Jerusalem. - THOMAS COEX/AFP via Getty Images

At the end of Salah al-Din Street in Jerusalem, just north of the Old City, a sign reads in French “Tombeau des Rois” or the “Tombs of the Kings.”

The funerary complex is known to Jerusalemites as the “Tombs of the Sultans.” Pausanias, a Greek author, historian and geographer of the 2nd century AD, described it as the second most beautiful tomb in the world, after the Tomb of Mausolus, one of the Seven Wonders of the Ancient World.

The Tombs of the Kings was closed to visitors in 2010, when France conducted a major restoration project that went on until the summer of 2018 at a cost $1.1 million. The French Consulate in Jerusalem reopened the site in June 2019 but soon had to close again.

The reopening was marred by a dispute between agents of the French Consulate and Israelis who attempted to enter the tombs without reserving the required tickets. The French Consulate condemned the scuffle, calling on the Israeli authorities to maintain calm in the area and ensure respect for France's control over the site.

“We hope that the climate necessary for the organization of small group visits, according to the procedures defined by the Consulate General in Jerusalem, can be established as soon as possible,” the consulate said in a statement. “We also hope this site, just like all French national edifices in Jerusalem, will remain available to the public in all its diversity.” The site was reopened again months later.

Jerusalem archeologist Abir Ziad told Al-Monitor, “The Tombs of the Kings is an archaeological masterpiece carved into the rock, with an area of ​​250 square meters. This archeological gem dates back 2,000 years to the Roman era and is deemed one of the most beautiful in the city of Jerusalem.”

She described a compound featuring a stairway leading to underground vaults supported by columns. The discovery included ancient coffins and a rainwater catchment and storage system.

Ziad said some coffins were sent to the Louvre Museum in France. “One of the coffins had an Aramaic inscription engraved on it. The burial site's facade also bears engravings of geometric shapes and inscriptions of artichokes and pyramids.”

Visitors are allowed to enter the burial site for only a few hours on Tuesdays and Thursdays. Tickets must be booked online for 10 shekels ($3) for tours of no more than 30 people.

Robin Abu Shamsiyya, a researcher in the history of Jerusalem, told Al-Monitor, “The unique architecture of the Tombs of the Kings shows it was constructed for an aristocratic family during the Roman period. The ancient Romans believed that burying their dead inside the rocks would provide more stability for the deceased to return to another life, unlike burial under the soil.”

He added, “The tombs are arranged on two levels: the upper floor that comprises four chambers and the lower one with three. All of them contain coffins and stone slabs. The French Consulate closed them off with metal mesh to protect and preserve them.”

He continued, “Information shows that the French government acquired the tombs after the Péreire brothers bought them from the Ottoman Empire in 1878 AD. They donated them to the French Republic, which now classifies them as a national monument.”

Abu Shamsiya continued, “Large groups of hard-line settlers frequently visit the tombs to pray at the entrance. Jews believe the site contains the tombs of King David and King Solomon. They also claim one of the sarcophagus is for Queen Helena of Adiabene, who converted to Judaism and moved to Jerusalem.”