Though a gag order has been relaxed, little is known about the extent of the damage caused by a major oil spill to Israel's marine ecosystems and beaches. 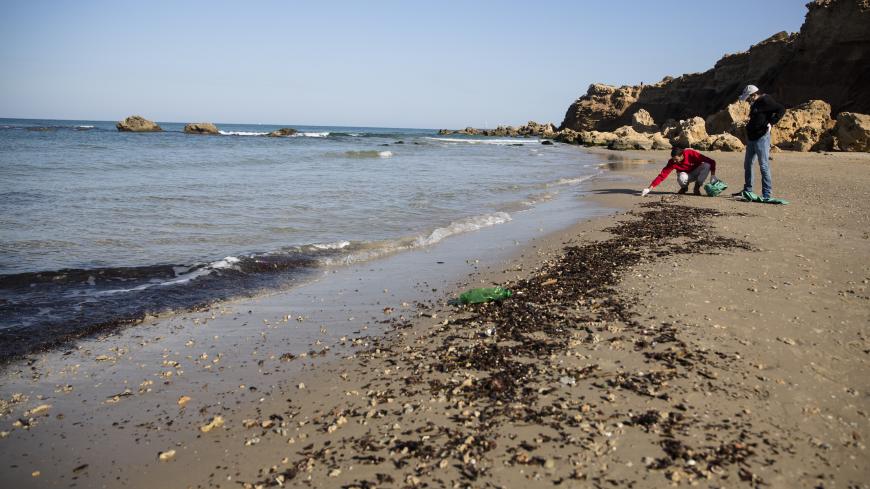 Men clean tar from the sand as part of the beach cleanup effort after tar covered Israel's coast on Feb. 22, 2021 in Hadera, Israel. - Amir Levy/Getty Images

Israel's Health Ministry has barred the sale of seafood from the Mediterranean Sea. Fishermen were ordered back to shore. Shops and restaurants were warned to take anything that arrived in the past few days from the sea off their shelves and to take in no new sea products. The ministry also said it was sending samples of marine life to Agriculture Ministry laboratories to check for contaminants.

The exceptional measures stem from a massive oil spill off Israel’s coast that occurred at the beginning of February. The spill was detected Feb. 16, when hundreds of tons of tar washed ashore after a heavy storm. On Feb. 21, the ministries of environmental protection, health and interior issued a joint statement calling on the public to avoid the beaches. “The ministries are asking the public to refrain from going to beaches from Rosh Hanikra in the north down to Zikim Beach in the Hof Ashkelon Coastal Council until further notice due to the pollution of the Mediterranean Sea and the beaches from tar. … Do not go to Mediterranean Sea beaches for swimming, sports, or recreational activities until further notice," read the statement.

Environmental Protection Minister Gila Gamliel told the press that the spill had been identified about 50 kilometers (30 miles) off Israel’s Mediterranean coast. Later, her ministry said that the tar pollution has impacted about 160 kilometers (100 miles) of the coastal strip. Nature and Parks Authority chief Shaul Goldstein warned on Feb. 20 that Israel is facing its “worst environmental disaster in a decade.”

Black strips of tar could be seen all along the coastline, from Haifa in the north all the way to the southern beaches near Ashkelon and Gaza. A dead whale washed up on a southern beach Feb. 18.

In the hours after the discovery, several volunteer groups coalesced along the coastline to help with the cleanup. The Haifa municipality posted on Facebook, "Thank you, the hundreds of Haifa residents who voluntarily and out of love for the environment and the sea came to clean up the beaches from the tar pollution. Immediately after the spill, the beach department of the Haifa municipality launched its emergency plan, which was developed with the Environmental Protection Ministry, to address the pollution. In the framework of this program, we have lookouts searching for spots where tar has collected for the municipal staff, who are cleaning up by hand to avoid damaging the coastal ecosystem."

The municipality of Herzliya called on volunteers to help clean the beaches, but only as part of the group organized by the authorities, which is providing protective gear.

The Adam Teva V’Din group — the Israel Union for Environmental Defense — says the oil spill was not a surprise, but a catastrophe waiting to happen. “This terrible tar disaster could have been avoided if it wasn’t for complete ignorance over the sea. There are no laws, no enforcement, no punishment," said the group’s executive director Amit Bracha.

Tammy Gannot Rosenstreich, director of policy and strategy for Adam Teva V’Din, told Al-Monitor that cleaning up the beaches could take a long time. “The Environmental Protection Ministry is talking about a month until they can reopen the beaches. As far as I understand, the most difficult problem currently is cleaning up the unrecognized beaches. Cleaning there is more complicated because of the rocks and small bays."

She added that after lobbying by hers and other environment protection groups and with the help of Knesset members Miki Chaimovich and Yoray Lahav Hertzanu, the Knesset’s environment committee is now set to hold a special meeting on the issue March 2.

Adam Teva V’Din was especially furious over the Feb. 22 decision by a Haifa court, at the request of the state, to impose a seven-day gag order on the ongoing investigation into the oil spill. The court prohibited the publication of any details of the investigation including the name of the ship, company and individuals involved, and even the ship’s point of origin and destination.

When the decision sparked a public outcry, the ban was significantly reduced but not canceled completely. The Environmental Protection Ministry said rather early on in the incident that 10 boats had been in the area when the spill occurred and could have been the origin. Kan public broadcasting reported Feb. 22 that the Greek-owned boat Minerva Helen was suspected in the incident, noting that the ship was previously involved in a major oil spill just off Copenhagen, Denmark, in 2008. The owners of the ship deny the allegations and the investigation in Israel and elsewhere continues.