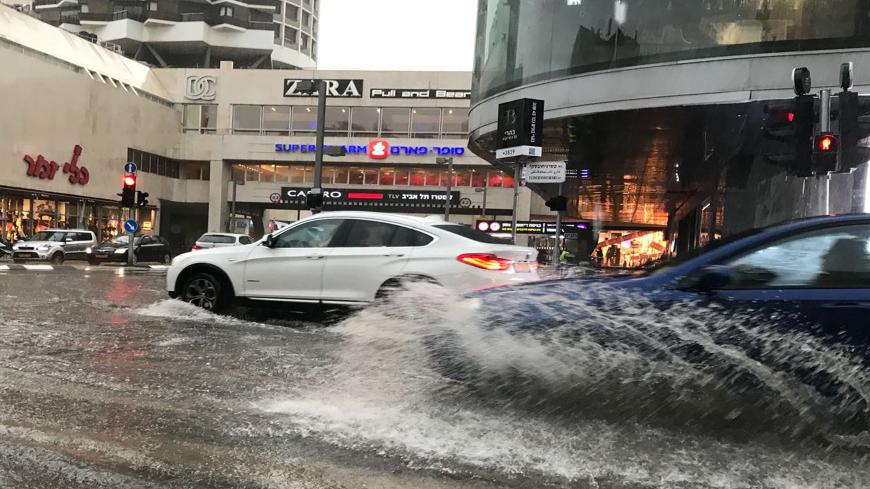 Israeli Prime Minister Benjamin Netanyahu participated Dec. 12 in the Climate Ambition Summit, organized by the British government. Marking five years to the Paris Climate Agreement, world leaders pledged during the online summit to fully transition by 2050 from fossil fuels to renewable energy sources. Some of these countries, like Sweden, set their target date even earlier.

Netanyahu had participated in the 2015 Paris Climate Conference. At the time, Israel defined rather modest goals. The country’s Intended Nationally Determined Contribution stated it intended to achieve an economy-wide unconditional target of reducing its per capita greenhouse gas emissions to 7.7 ton carbon dioxide by 2030. Israel also set goals on renewable energy sources, efficient use of energy and shifting from private cars to public transportation. With that in mind, the targets set last week by Netanyahu are far more ambitious.

“In coal, we've substantially reduced our dependency. In fact, Israel is a global leader in cutting coal consumption. By 2025, that's just five years from now, barring an emergency, Israel will no longer be burning coal, any coal. In solar energy, over the last five years, we've increased our generation from 2% to some 10%. By 2030, solar energy will provide over a third of all of Israel's electricity. The challenge we still face in solar energy is storage. My government is pursuing policies that will overcome this challenge," promised Netanyahu.

Experts in Israel claim that Israel had fulfilled only partly its own 2015 targets. Some of the experts say that the target of increasing the use of renewable energy is where Israel is doing well. The government had pledged in 2015 for renewable energy sources to supply 17% of its total energy consumption by 2030. The target of 30%, and even more than that, say the experts, seems to be doable.

Nevertheless, on two other goals — energy efficiency and transportation shift — Israel is not doing well. Israeli consumers waste a lot of energy compared with their peers in Europe, especially due to the constant use of air conditioners. They are also attached to their cars, refusing to use buses or trains, which could be explained by a lack of sufficient public transportation infrastructure. The country's railway network has advanced quite a lot over the last few years, and metro lines and light railway tracks are being constructed in Tel Aviv and its suburbs. However, the overall gap compared with other Organization for Economic Co-operation and Development (OECD) countries is still enormous.

Minister of Environmental Protection Gila Gamliel is aware of the challenges Israel is facing on climate change. She believes that the new targets set by the prime minister signal a change of governmental priorities. In a communique published after the Dec. 12 summit, Gamliel thanked Netanyahu “for positioning renewable energy sources at the top of Israel’s agenda, and for expressing commitment to this issue, in order to guarantee a sustainable future. The environmental policies championed by the prime minister for transitioning from fossil fuel to renewable energy offer great hope for the citizens of Israel. It pushes the country toward a low-carbon economy, based on clean energy sources."

Tammy Gannot-Rosenstreich. director of policy and strategy at nongovernmental organization Adam Teva V’Din, also welcomes the commitments made by Netanyahu. “Climate change has been perceived by many in Israel as a marginal issue, so for the prime minister to talk about that - it’s new and it’s very positive," she told Al-Monitor. She explained that what Israel really needs now is a framework climate law that would offer a comprehensive approach. A law that will include both reducing greenhouse emission and adaptation measures for an energy-efficient, clean-energy economy.

“In Israel, over the years, we focused on targets but did not establish a national plan that addresses all the stakeholders. For instance, the Transportation Ministry needs a significant target on reducing the use of private cars. We are at the bottom of the list on that compared with other OECD countries. We need for the climate issue to be considered and budgeted in a comprehensive manner."

This year, Adam Teva V’Din has been working with the Ministry of Environmental Protection on drafting such a law. Speaking at the Eli Hurvitz Conference on Economy and Society, just two days after the Climate Ambition Summit, Gamliel pledged to present a first draft of that law to the Knesset in the very near future.

Gannot-Rosenstreich noted that embracing clean energy is not just being part of the family of nations; it is in Israel’s own interest. "Last year we saw great floods in Tel Aviv, Nahariya and Binyamina. This year we had floods in Ashdod and Ashkelon. People don’t realize that climate change has a concrete effect on us. And while the Tel Aviv municipality is strong enough and rich enough to develop its own plan for facing climate change, other municipalities have no expertise or financial means for developing such plans," she said. She added that Israel, the startup nation, has only to gain from focusing on advancing clean energy sources.

In order for Israel to advance toward the new targets set by the prime minister, the relevant ministries must each play their part. Spokeswoman for the Energy Ministry Maya Etzioni told Al-Monitor that they are currently leading several energy target programs. These include, for instance, measures to reduce greenhouse gas emissions by enhancing the scope of solar energy. The public had until Dec. 13 to express its opinion on this specific plan, and the ministry is now busy examining the public’s input, before going ahead with it.

But there are also those who are less optimistic on Israel’s engagement for change. The Extinction Rebellion movement labors to bring up climate and ecological crises to the top of the global agenda. Its Israeli branch warns that the government is doing far too little to confront these crises.

"According to a report by the state comptroller, Israel will not manage to achieve the ridiculously low target of 17% [renewable energy] in the coming decade. Obviously, if we cannot reach that old, low target, there is no chance we can fulfill any of Netanyahu’s new declarations. It’s just lip service. As long as Israel does not abandon its gas and petrol projects, as long as it does not advance on transitioning to renewable energy sources and develop efficient public transportation infrastructure, it is not really preparing for the dangerous consequences of the climate crisis. Of course, we will all pay the price for that in the coming years," a representative of the group’s communications department told Al-Monitor.