An oil spill in the Mediterranean washed up to the shores of the Gaza Strip, threatening the fish wealth and the beach season amid great challenges for government agencies in Gaza to clean the beach given their lack of appropriate resources. 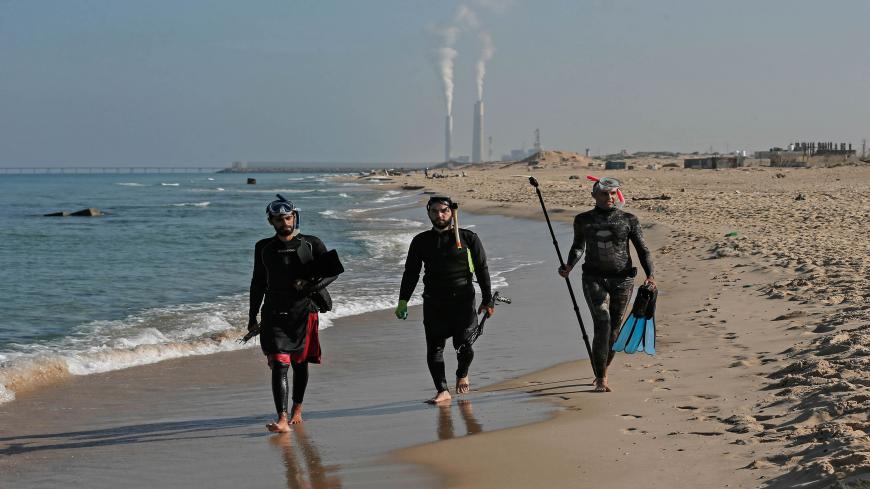 Palestinian spear fishermen prepare to dive with an underwater photographer in the Mediterranean Sea, off the coast of Khan Yunis, southern Gaza Strip, Oct. 15, 2020. - Mahmud Hams/AFP via Getty Images

GAZA CITY, Gaza Strip — The Water and Environmental Quality Authority in the Gaza Strip announced March 3 that the oil spill that appeared in the Mediterranean Sea in early February has been washing up on the Gaza beaches, days after it reached the Israeli shores.

It remains unclear what exactly caused the oil spill that has polluted more than 170 kilometers (106 miles) of the Israeli beaches, reached the shores of the Gaza Strip and Lebanon, and harmed marine life in the area. Israel believes it was caused by a leak of 200 tons of oil from an oil tanker sailing 50 kilometers (31 miles) from the shores of Israel, Gaza and Lebanon.

The head of the Water and Environmental Quality Authority in Gaza, Yasser al-Shanti, told Al-Monitor that the oil spill started appearing on the shores of the Gaza Strip in early March, “More oil is on its way to the shores of Gaza in the coming days,” he warned.

He said, “More tar is expected to blacken and pollute the shores of the Gaza Strip, killing a large number of fish. This environmental [catastrophe] coincides with the beach and swimming season that will kick off at the end of next month [April]. Cleaning up the oil tar takes a long time, a government plan and specialized [equipment] that is not available in the Gaza Strip.”

According to the authority’s March 3 announcement, cleaning workers in the Gaza municipality had discovered the pollution and reported it to the authority, which in cooperation with the United Nations Development Program, took samples for tests. The samples appeared to be oil tar, and the authority began the clean-up process.

The strong winds and depressions that hit the Middle East over the past few days threw the oil leaks onto the beaches of Israel, Lebanon and Gaza, amid expectations that pollution will impact the marine environment for years.

Nizar Ayyash, head of the Palestinian Fishermen Syndicate in Gaza, told Al-Monitor that the continued flow of tar toward the shores of the Gaza Strip had temporarily halted fishing activities. He called on the competent authorities in Gaza to quickly develop plans to reduce pollution and clean up the oil slick along the Gaza shores.

Ayyash explained that there are around 4,300 fishermen who rely on fishing to survive and provide for their families. “The halt of their activities due to the oil spill will render them unable to secure their daily food. The fish in the [Israeli-] permitted fishing zones for fishermen in the Gaza Strip — which ranges from 12 to 15 nautical miles — will be either dead or contaminated by the oil spill, which will subsequently harm the citizens’ health.”

Government authorities in the Gaza Strip fear they will not be able to deal with the flow of more oil spills, in light of the lack of the right equipment. The head of the emergency committee at the municipality of Gaza, Abdul-Rahim Abu al-Qumbuz, told Al-Monitor, “Dealing with any pollution in the sea requires special equipment to collect and trap oil spills in the middle of the sea, and transport them to the shore for disposal.”

He said that such equipment is not available in the Gaza Strip. So the committee, in cooperation with the Water and Environmental Quality Authority, waits for the oil spills to be thrown by the waves onto the beaches, before collecting them and disposing of them.

Abu al-Qumbuz said his committee is continuously monitoring and following up on this issue to accurately determine the extent of the pollution, noting that the decision to close the beaches in the Gaza Strip has not been discussed so far.

On March 3, Israeli Minister of Environmental Protection Gila Gamliel accused Iran of being behind the oil spill. She said that the spill was deliberately caused by a Libyan-owned ship dubbed “Emerald.” The ship was smuggling a shipment of oil from Iran to Syria, and when it approached the Israeli economic zone, it deliberately contaminated the sea water by tons of tar, according to Gamliel.

Mohammed Wadi, a surfer in Gaza City, told Al-Monitor that he had been seeing black lumps, believed to be oil, close to the shore of Gaza City. He said he took one in his hand to the shore for examination, and he was certain that it was a lump of tar.

Palestinian fisherman Wael Bakr told Al-Monitor that the oil stains that started appearing off the shores of the Gaza Strip are not large, noting that he saw several small dead fish floating on the surface of the water while fishing on March 4.