The cabinet also voted to keep the ban on international flights in place through at least Sunday. 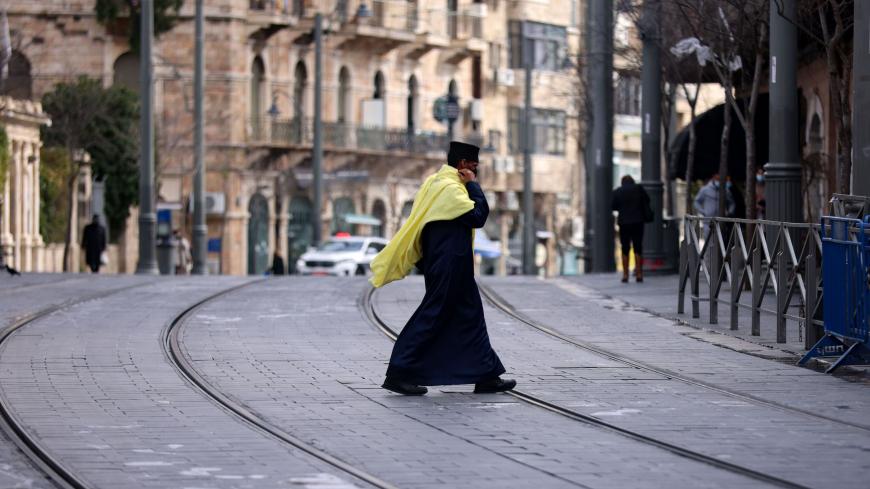 A priest crosses a nearly deserted street during a lockdown imposed by the authorities in a bid to fight spread of the coronavirus in the center of Jerusalem, on Jan. 28, 2021. - EMMANUEL DUNAND/AFP via Getty Images

Israel has extended its lockdown by an additional five days, with the cabinet voting Sunday to keep schools and most businesses closed through at least Friday morning.

The nationwide lockdown, now is in its fourth week, is Israel’s third since the start of the pandemic. A ban on international commercial air travel will also stay in place through Feb. 7 and the border crossings to Jordan and Egypt will remain shut, according to a statement from Prime Minister Benjamin Netanyahu and the Health Ministry.

Israel is the world leader in per capita vaccinations, having so far administered the first dose of the Pfizer-BioNTech vaccine to roughly one-third of the population. But the vaccination drive and the lockdown haven’t managed to significantly slow the spread of the virus.

The country of nine million is still averaging over 6,000 new COVID-19 cases per day, the Associated Press reports. Since February 2020, Israel has logged over 640,000 confirmed cases and more than 4,800 deaths from the virus.

Israeli officials disagreed on how long to extend the virus restrictions. During a cabinet meeting on Sunday, Netanyahu called for restrictions to be extended for at least another week, but Defense Minister Benny Gantz wanted the measures lifted sooner.

The cabinet will meet again on Wednesday to decide whether to extend the lockdown again.

Over the weekend, an estimated 10,000 ultra-Orthodox Israelis gathered in Jerusalem for the funerals of two leading rabbis, prompting criticism that Netanyahu isn’t enforcing the lockdown rules among his biggest supporters. Ultra-Orthodox Jews account for roughly 40% of the new virus cases, despite making up just 11% of the population.

"This is what unequal enforcement looks like," tweeted Gantz, who is Netanyahu’s chief rival. “Either everyone is locked down, or everything is opened up for everyone. The days of chicanery are over.”

Israel’s parliament approved legislation on Sunday increasing fines for lockdown violators. The bill, which passed despite strong opposition from ultra-Orthdox and Arab parties, ups the maximum fine from $1,500 to $3,000.