Seventy years after, the Israeli government expresses regret over the disappeared Yemenite children and is offering the families reparations. 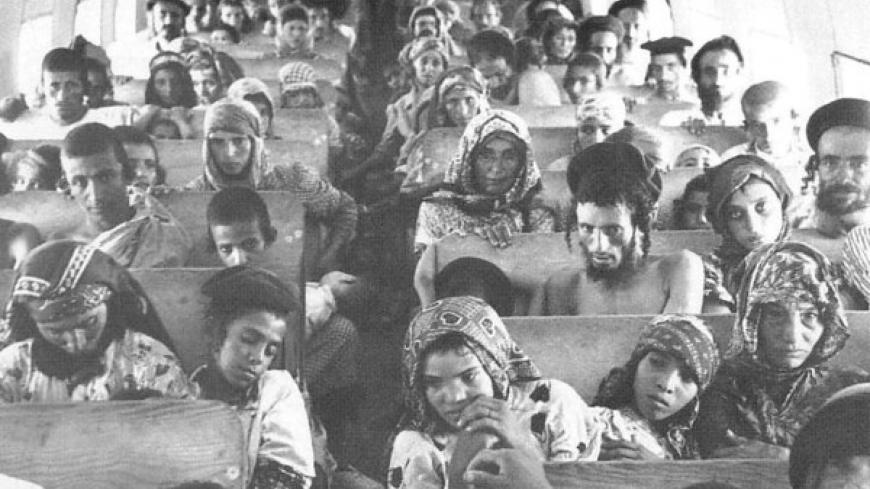 In the course of the operation "Magic Carpet" (1949-1950), the entire community of Yemenite Jews, around 49,000, immigrated to Israel. Most of them had never seen an airplane before, but they believed in the Biblical prophecy: according to the Book of Isaiah (40:31), God promised to return children of Israel to Zion "on wings of eagles." - Wikipedia

The long saga surrounding the disappearance of over a thousand immigrant children from Yemenite Jewish families took an important turn this week. After almost seven decades, the government finally recognized the suffering of their families and decided Feb. 22 to compensate them each for their loss.

The plan approved by the government sets aside a sum of 162 million shekels ($50 million), which would be distributed to families based on the following criteria: 150,000 shekels ($46,000) is to be given to each family who received no information about the death of their child in real time, including the circumstances of the child’s death or an as yet unidentified place of burial (also including the families of children whose burial places were only identified significantly later than the death of the child). In the event that the committee responsible for the investigation concludes that the fate of the missing child is still unknown, the family is to receive 200,000 shekels ($61,000).

Furthermore, the government announced that the state will officially recognize that these children were taken away from their parents. The official statement said the government expresses its "regret over the events that occurred in the early days of the state and recognizes the suffering of the families whose children were part of this painful affair." On the other hand, the government rejected the families’ demand that what happened was part of an institutional attack against the families of the abducted children, or that it exploited parents who were new immigrants from an undevelopped state.

It came as no surprise that Prime Minister Benjamin Netanyahu pushed for this decision now, just one month before the upcoming election. Inevitably, it will serve his interests. He not only congratulated the government for making this decision, but promised he would ask the education minister to include the story of these children in state-sanctioned textbooks. As he put it, “People need to know about what happened.”

While this is a significant milestone in the yearslong, Sisyphean struggle of the families impacted by the tragedy, even it will not bring them closure. The episode will remain a festering sore on Israeli society at large. The pain and suffering associated with it will continue to be passed down from one generation to the next.

Three official commissions of inquiry investigated the scandal over the years: the Committee to Locate the Yemenite Children, the Committee to Investigate the Fate of the Missing Yemenite Children and the Official State Commission of Inquiry into the Disappearance of the Children of Yemenite Immigrants from 1948 to 1954. In addition, another parliamentary committee of inquiry was formed in 2016 to further investigate the incident.

This latter committee put the case of the missing children back on the national agenda. What set it apart was that families were now able to use the most advanced methods, including DNA testing, to find out what happened to their children.

Of course, many of the parents had died by then or were very elderly and infirm. Nevertheless, every effort was made to test their DNA, since this would not be possible later. These evoked chilling accounts of babies who were taken from hospitals but never returned. Their parents were told that they died of disease, but the families refused to accept this, believing instead that the truth was being hidden from them. They were convinced that their children were taken by the state and handed over for adoption.

After hearing the testimonies and studying the documents, the committees all reached the same conclusion. The children were all in bad physical shape due to harsh living conditions. Many of them were being raised in tents in which the government housed the new immigrants. They got sick, died and were buried.

An important development for these families occurred in 2017, when the government of Israel first recognized that a gross injustice was perpetrated against them and established a commission of inquiry to investigate what really happened. As a result, hundreds of thousands of classified documents, stored in the State Archives for 70 years, were released for review ahead of schedule. These included the confidential conclusions of previous commissions of inquiry, along with testimonies.

This was a major step forward by the state. It was evidence of a genuine desire to deal with the issue. “Children disappeared from the embrace of their parents and families. The scandal is still seared in the hearts of their families. … We feel that we have a moral obligation to investigate the incident and get to the truth. … As of today, we will enable the families to try to reach closure. The data being declassified will, first and foremost, eliminate the skepticism that these families have toward state institutions, and allow them to move forward. It will heal the wound, and in so doing, strengthen Israeli society,” said then-Minister Tzachi Hanegbi of the Likud, who was appointed by Netanyahu to coordinate the issue.

This shift in government policy resulted in the media beginning to take the matter seriously. Journalists also began to investigate the testimonies and claims, instead of rejecting them out of hand as little more than ridiculous rumors. The rise of social media also helped. Dozens of internet groups were formed, and families began to share information, including information from overseas.

“Not a single journalist was willing to listen at first. They all waved me off, when I tried to interest them in the story. They thought the whole case was ridiculous, and that a series of committees of inquiry had already investigated it,” Nurit Koren told Al-Monitor in 2017 when she headed the Special Committee on the Affair of the Disappearance of Yemenite, Eastern and Balkan Children. She then was a Knesset member representing the Likud.

Koren, the child of Yemenite immigrants, made the search for the truth about these children into her life mission. She even attempted to pass legislation to exhume the children’s bodies. With great insight, she focused her campaign on having the state take responsibility for what happened. At the time, she accused the official institutions of the state of engaging in acts of organized crime that targeted an already hard-pressed population. As she put it, “In the 1950s, Yemenite immigrants were perceived as coming from a primitive culture. It was said that they didn’t know how to care for their children, so they were taken away to residential facilities. Prime Minister David Ben-Gurion gave the order.”

On Feb. 23, she told Al-Monitor that there can be no doubt that the fact that an Israeli government recognized the injustice is a huge step forward, but that this is not enough. She promised the fight will continue. “Unfortunately, the state did not take responsibility for what happened. The financial compensation it is offering is not enough, and more than any money, these families want to know the truth. There is still a lot that should be done, like examining the graves and declassifying material that remains classified. Only half the work got done. I am flooded with phone calls from the families, so it is obvious that the struggle will continue. We will insist that an official day of remembrance is proclaimed. I am no longer a member of Knesset, but this just cause still burns within me. I will continue to lead it on a volunteer basis, until the state takes full responsibility.”