Will mystery of Israel's missing Yemenite children soon be solved?

The families of Israel's Yemenite children who disappeared in the early 1950s might be disappointed when the archives on this issue open up, as it is not certain that they will find any answers there. 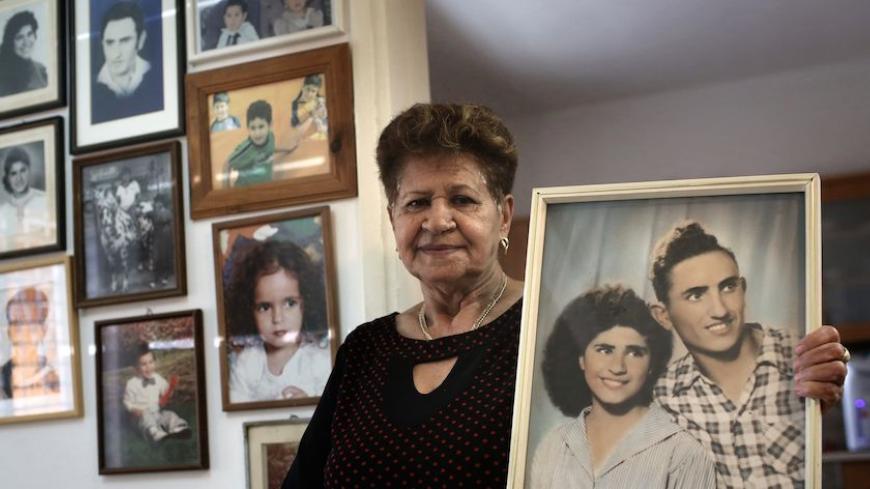 Yona Musa, 76, an Israeli of Yemeni descent, poses with a portrait of her and her husband at her home in the Israeli city of Herzliya, near Tel Aviv, June 29, 2016. Musa is one of the thousands of Israelis, mainly from Jewish Yemenite families, who claim their babies were abducted more than 60 years ago and handed over for adoption. - MENAHEM KAHANA/AFP/Getty Images

“I had a sister named Naomi Ziner who was hospitalized at Mt. Scopus. My father, of blessed memory, came to visit her and was told by the doctors that she had passed away. My father asked to see the body or receive a death certificate, but they ignored his requests with all sorts of excuses. He returned home without her. … I’m ashamed of a country where these were its founders on the one hand and its destroyers on the other hand. I scorn them.”

This testimony, by Nehemia Ziner, is only one of thousands gathered by the nongovernmental organization Amram in a giant archive uploaded to the internet last month. The website’s home page is full of photos, and clicking on one leads to the testimony of an Israeli family (most likely) of Yemeni origin who claims that one of its children was kidnapped by the Israeli establishment in the first years of Israel's existence, primarily between 1948 and 1954.

The affair of the Yemeni children is one of the most inflammatory in Israeli society. Since the 1960s, it has refused to disappear from the public's radar — every few years it comes up for debate, and new aspects of it are revealed. Some families claim that the Ashkenazi (European) establishment methodically and in a premeditated manner disappeared thousands of children of Yemeni background who had immigrated to Israel in the late 1940s and early 1950s and gave them to Ashkenazi families while telling their birth families that their child had died from illness.

In May 2016, Haaretz reprinted a series of investigative reports on the topic that it had first run in the 1990s. With the republication of the stories, Prime Minister Benjamin Netanyahu appointed Minister Tzachi Hanegbi to look into releasing testimonies from the protocols of three commissions of inquiry into the matter that are classified until 2071.

“These testimonies are good as tall tales, not as academic material,” said Dov Levitan of Bar-Ilan University and who studies the immigration and absorption of Yemeni Jews, especially the issue of the Yemeni children. “These are testimonies gathered 50-60 years after [the events and] not in a professional manner. You can use them, as they do, for public or political advantage.”

Levitan also told Al-Monitor that he has interviewed hundreds of families, including some of them more than once, several years apart. “Every time, the story changes,” he claims. “The first time they say they were exhausted and sick and couldn’t take care of the kids, and they agreed to the state’s offer to give them up for adoption. The second time they say they didn’t want to give up their kid but were afraid of the authorities, and so they gave up [the kid] for adoption. The third time they say they opposed it and fought it, but the kid was taken away from them by force. Each time they are certain they are telling the truth.”

“These claims are like Holocaust denial,” said Shlomi Hatuka, Amram's founder. “You shouldn’t confront me with the claim that these testimonies are fabricated, just as you wouldn’t confront a Holocaust survivor with claims from a Holocaust denier. Children disappeared wholesale during a specific period, from specific hospitals, in a methodical manner.” Hatuka, also a poet and social activist, comes from one of the affected Yemeni families.

“The story never died down; the families are always talking about it,” Hatuka said. “Every generation uses the tools at hand. We renewed the fight a few years ago by means of our generation’s tools — Facebook, Twitter, a virtual archive, establishing days of awareness and remembrance to allow the narrative to come into being by itself.”

This narrative is Levitan’s explanation for the centrality of the story in Israeli society. “Terrible things happened during the [early] period of immigration to Israel. They robbed the immigrants of manuscripts, clothes, jewelry, gold and silver. The whole treatment of the immigrants was humiliating. The state did many foolish things, like not letting parents know in real time that the child died. So this became the Yemenites’ story that passed down to the second and third generation. But they didn’t kidnap or take children for adoption forcibly. Those who could adopt children at that time were the well-off Ashkenazim, and they were racist. They would not agree to adopt a Yemenite child.”

The tragedy is that every development in the affair stands to cause a deep rupture in Israeli society. Levitan believes that that is what will happen when the protocols are made public, which, it appears, will happen following the conclusion of Hanegbi's investigation.

“There will be a very big fracture,” Levitan asserted. “They’re building up expectations and delusions, and when they open up the protocols, they’ll discover that there’s nothing to them [the testimonies]. I saw these materials, and I gave a large part of them to the commissions [of inquiry]. Then they’ll claim that the commissions worked to cover up the story, and the narrative will be maintained.”

Hatuka also believes the protocols will be declassified, but for him that is not the main issue. “The protocols are important in adding more testimonies to the ones we have, but most of the families didn’t testify at all [for the commissions of inquiry],” he said. “We have thousands of testimonies like these. What’s really important is to open up the classified adoption papers. Today there are adopted children who can’t access their adoption papers. If the state really wants to solve this thing, that’s what they have to do. The alternative is that the families will continue to fall apart. They can’t stand it. It’s a living and real trauma. The state has to go through a process of reparation — to admit it, to ask forgiveness, to designate a day of remembrance. Sure it would have a social price, but on the other hand, the negative feelings grow as long as the state covers up and denies it.”

In the meantime, Israel is divided among those who are certain that there was no conspiracy behind the story of the Yemeni children and those who are sure that the families’ claims that their children were kidnapped is the absolute truth. Most likely, it will never be known what really happened.

On the other hand, only four years ago it was revealed by the media that the state had covered up a program of injecting female immigrants from Ethiopia with contraceptives without their consent. It seems one must at least acknowledge the possibility that the Ashkenazi establishment might have done what the Yemeni families claim it did, even if unsystematically.