Over the last year, the long-running affair of Israeli-Yemenite babies kidnapped and put up for adoption has risen on the public and political agendas. 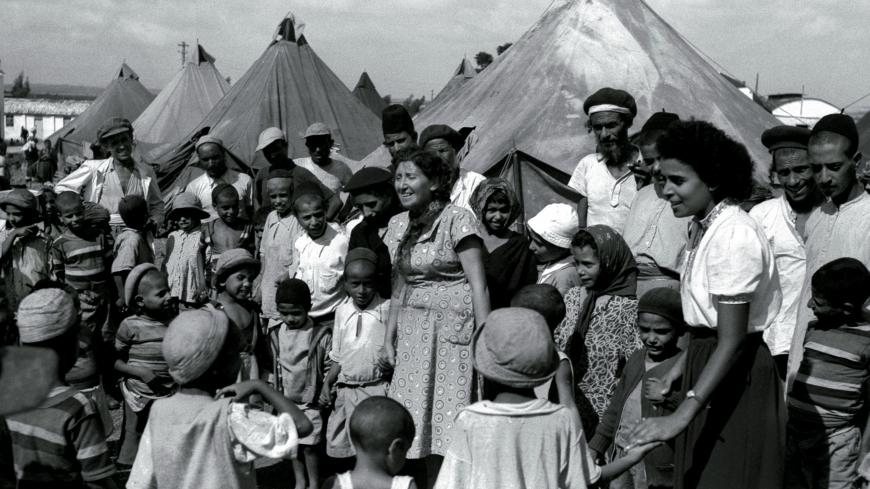 Jewish immigrants from Yemen are visited by Israeli nurses in a tent encampment in 1949. - REUTERS/Stringer

Several hundred people who gathered in Rosh HaAyin on Oct. 8 raptly focused on the huge screen at the front of the hall. They were watching the disconcerting testimony of Shulamit Mallik, 83, and the spine-tingling validation it gave to their similar claims that an official state apparatus was involved in kidnapping the children of Yemenite immigrants in the 1950s and handing them over for adoption.

When Mallik was 18, she worked at the children's home at the Kadima transit camp for immigrants arriving in Israel. She said that delegations of women from overseas sometimes came to visit the camp and that a number of babies then would disappear from the camp immediately afterward. She recalled suspecting that something inappropriate was taking place and the screams of mothers when they were informed that their children had allegedly died of illness. Many members of the audience — the brothers and sisters of those infants — could not hold back the tears. Their parents were likely dead or too old to attend the event, but these siblings, now in their 60s and 70s, came to exchange stories. The similarities in their accounts were chilling.

Yedioth Aharonoth first reported on Mallik's story in August. This month, she sat facing a hall full of people with similar experiences at the annual Yemenite Festival, hosted by the city of Rosh HaAyin every Sukkot. Her remarks had special meaning to them. They were poignant coming directly from her. Watching select parts of Mallik's video testimony intensified the outpouring of emotion. For six decades, they had been silenced or branded as delusional, but now they felt that the truth was finally coming to light, and that it would no longer be possible to dismiss their account of what happened. More documents and testimonies came to light last year, proving that parents had not concocted horrific stories about the abduction of their children. In some way, it was a relief for many, after years of dealing with a wound that refuses to heal. The establishment was finally paying attention to their anguished cries.

Last year was a milestone in the long-running saga of the kidnapped Yemenite babies, which has dogged Israeli society since the 1950s. Over the past few decades, a number of committees charged with investigating the affair only scratched the surface, doing nothing to uncover the scope of the affair. This year was the first time that the government has recognized the injustice suffered by these families, establishing the Special Committee on the Disappearance of Children from Yemen, the East and the Balkans to investigate the affair.

In December 2016, hundreds of thousands of documents in the state archives that were supposed to be sealed for 70 years were released ahead of schedule. These included the sealed conclusions of various committees of inquiry along with numerous testimonies. It was a huge step by the state, indicating that it genuinely wants to resolve the issue. Prime Minister Benjamin Netanyahu described it as correcting a historical injustice. Minister Tzahi Hanegbi, appointed by Netanyahu to oversee the lifting of confidentiality, said, "Children disappeared from the embrace of their parents and their families. This whole incident refuses to disappear from the hearts of these families. … We feel that we have a moral obligation to investigate the truth. … From now on, we will allow families to try to achieve closure. First of all, this trove of documents will remove any doubts the families have about state institutions and allow them to move forward. It will help them heal the wound, and this will, in turn, strengthen Israeli society."

Israeli media finally decided this year to take the affair seriously and conduct their own investigations into the testimonies and claims. Until now, it had dismissed them as little more than baseless rumors.

The vibrant spirit behind these changes is Likud Knesset member Nurit Koren. Since being elected in 2015, Koren, the daughter of Yemenite immigrants, has been waging a campaign to uncover the truth about the affair. By harnessing the parliamentary tools at her disposal, she has shown that an elected official can instigate real change. "Not a single journalist wanted to hear about it at first," she told Al-Monitor. "They all brushed me off, when I tried to interest them in it. They thought it was all made up and that various committees of inquiry had already investigated the claims."

Thanks to social networks, she was able to put the issue on the national agenda. The internet made more and more documents and testimonies readily available and connected people with similar stories. The abundance of new information and extensive coverage by the media, as well as interest by the public and politicians, resulted in an outburst of creative efforts as well. Numerous films and plays about the issue were produced in the last year.

Koren's stubbornness not only resulted in getting sealed documents' released, but also led to a series of DNA tests in an attempt to find links between adopted children and families whose babies were taken from them. As a result of these tests, two children who disappeared in the early 1950s have been able to re-establish ties with their biological families. As head of the special parliamentary committee, Koren has spearheaded special legislation to exhume the bodies of missing children for DNA testing on their remains. The law passed its first reading in September. Soon after the Knesset convenes its winter session Oct. 22, it will be brought up for a second and third reading, perhaps making it possible to take another giant step toward solving this mystery.

Koren says that the current focus of her struggle is to get the state to assume responsibility and confirm that its institutions were responsible for the methodical abduction of children. "While I have no document that says that someone gave the order, nor will we find such a document, it's obvious that it happened. And there are plenty of testimonies and documents confirming this," Koren said. "What people have to understand is that in the 1950s, Yemenite immigrants were perceived as coming from a primitive culture. It was said that they didn't know how to care for their children, so their children were taken from them and put in children's homes. It was a direct order, given by Prime Minister David Ben-Gurion. People living on kibbutzim were revered, while Yemenites were given showers and had their side curls shorn off. There are accounts dating back to the early 1950s of Knesset members [Uri Avneri and Menachem Porush] requesting an investigation into immigrant claims of abductions in the transit camps, but they were silenced. The crime was organized. A single person couldn't have done this alone. It required institutional support."

As far as Koren is concerned, there is still a lot to do but little time to do it. Who knows when the next elections will be, and after that, whether the committee she heads will continue to exist? Her decision to focus on getting the state to recognize its role in the affair does not stem from any desire to obtain financial compensation for the families affected. Rather, she wants to get this chapter of Israeli history into the history books and create a center celebrating the legacy of Yemenite Jewry. As Koren puts it, "That is the only thing that will bring closure to this affair and allow us to move on."