Ahead of the March elections, Prime Minister Benjamin Netanyahu is repeating promises he made nine years ago to control crime rates in Arab towns and villages. 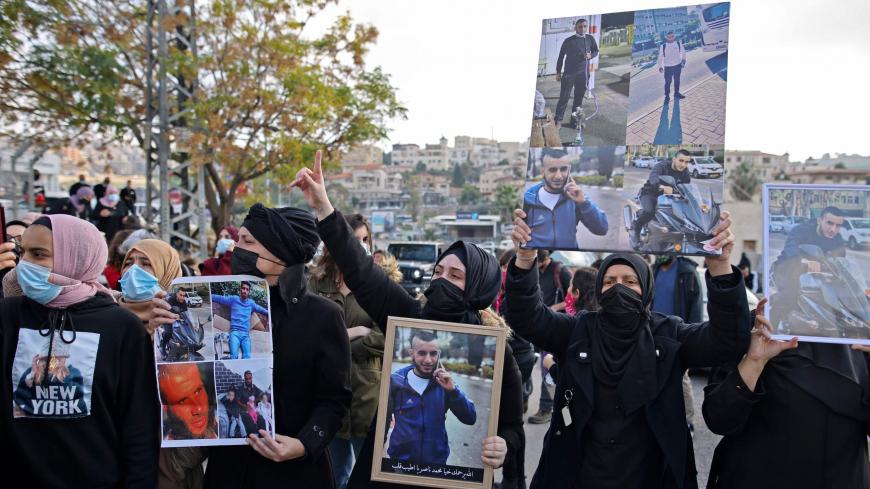 Arab-Israeli women take part in a protest after a student was killed in a reported police shootout this week, in the northern Arab-Israeli town of Umm-Al Fahem on Feb. 5, 2021.

The Israel Police clashed with a group of men they said were shooting at a house Feb. 1 outside the Arab town of Tamra. It was part of a larger effort by the police to combat rising crime in Arab society. A firefight broke out when the gang started shooting at the police with automatic weapons. When it was over, two young people were dead. One was suspected of firing at the house, but the other, Ahmed Hijazi, was a nursing student who happened to be in the vicinity but was not implicated in the incident. Internal Affairs arrived at the scene immediately after the shooting and began interrogating the police officers involved.

The next day, thousands of people from Tamra and other Arab towns and villages took to the street to protest Hijazi’s death and the police's inability to rein in crime in Arab society. Over the weekend, thousands more took part in a march through the city to protest escalating crime rates in the community. Ayman Odeh, the head of the Joint List, was among the participants. He told the crowd, “If the victim were Jewish, the whole country would grind to a halt. The role of government and the police is to stop bloodshed, not to shed even more blood.”

A group of Arab journalists announced that they plan to protest what happened by leaving the police spokesperson’s WhatsApp groups. They explained, “This decision is intended to protest police statements that consistently blame the victim and the Arab sector, of which we are a part.”

Ali Mughrabi of Channel 13 News appealed directly to Israel’s decision-makers, saying, “As I wander about Arab society, I am personally witness to a torrential flood of bloodshed. My children hear gunfire every single day and can already distinguish between pistol fire and fireworks.” He later told Radio 103 about his decision to leave the police WhatsApp group, explaining, “We saw how the police lie to our faces with the statements they send through the spokesperson’s office. They think we work for them. They consider Arab journalists a tool to relay their message, not something that operates in a critical and supervisory capacity.”

Inevitably, Prime Minister Benjamin Netanyahu has taken full advantage of the chaos. He has adopted a new strategy for the upcoming March election, embracing the Arab community instead of ostracizing it and inciting conflict. He spent the last few weeks visiting Arab towns and villages and holding Zoom meetings with Arab mayors to discuss burgeoning crime and violence in their towns.

As part of a larger program to combat crime in the Arab sector, the prime minister and Minister of Internal Security Amir Ohana announced Feb. 3 that they were appointing Aharon Franko, former chief warden of the Prison Service, to head the project. Netanyahu mentioned the incident in Tamra that killed Hijazi, saying, “What is happening now in Arab communities is terrorism. There is no other way to describe it. Sometimes, the loss of its victims is very painful to all of us. I want to send my condolences to Ahmed Hijazi’s family.”

The Arab community was outrage by the news of Franko’s appointment. Just 12 years ago, when Franko served as chief of police in Jerusalem, he attacked the Arab community over riots that erupted at Al-Aqsa Mosque and the Western Wall and called Arabs ungrateful. Speaking with a group of journalists, he explained, “We insist on freedom of religious worship. The police allowed the many Muslim worshippers who came to the Temple Mount to observe Ramadan and everything went smoothly. And yet, they are rioting now, during the Jewish New Year season.”

Ahmad Tibi, another Joint List senior, was quick to respond to Netanyahu’s announcement and Franko’s appointment, tweeting, “Crime in Arab society is a cancer that we must fight against and get under control. The crime against Arab society is racism.” Odeh called Franko’s posting “an appointment in the spirit of Netanyahu.” He explained that the prime minister’s plan to handle crime in the Arab society is nothing more than “an election stunt on the backs of Arab murder victims after more than a decade of promises.” Joint List Knesset member Aida Touma-Suleiman responded to the appointment, “Colonialism is alive and kicking, when an officer is appointed by the prime minister to deal with children.”

Though Netanyahu likely a celebratory reception for his plan, many people remember that just nine years ago, on the Knesset's day dedicated to studying crime and violence in Arab society, the prime minister announced, “It is time to increase law enforcement significantly in Arab towns and villages. It is time to do just that.” Nine years on, Netanyahu apparently needed an election campaign to remind him that Arab civilians are being murdered in this country on a weekly basis.