Despite the Saudi-led effort to bury the hatchet with Qatar, unified economic policies are coming up against by GCC countries’ needs to win foreign investment post-COVID. 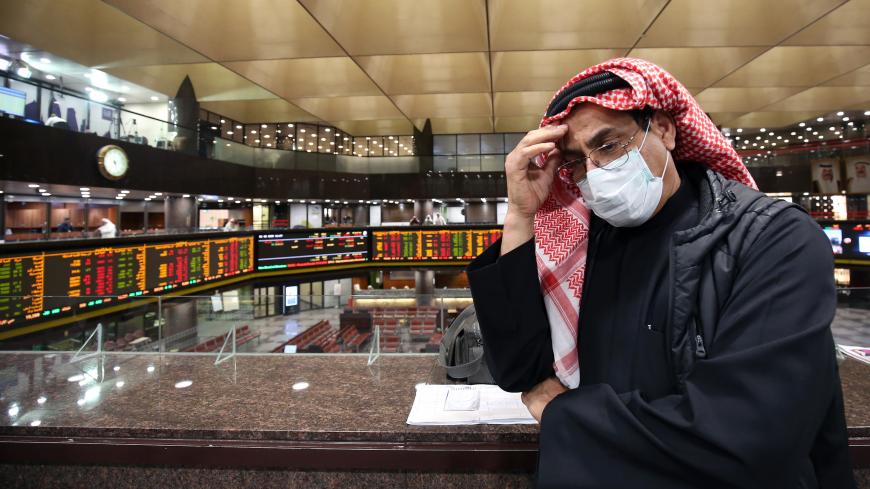 A Kuwaiti trader wearing a protective mask follows the market at the Boursa Kuwait stock exchange in Kuwait City on March 1, 2020. - YASSER AL-ZAYYAT/AFP via Getty Images

Despite the reconciliation process set in motion last month at the Gulf Cooperation Council summit in Riyadh, there are signs that economic competition between the six GCC member states is heating up as the double shock of the COVID-19 crisis and the volatility of oil prices weigh on Gulf economies, causing high sovereign debt levels.

Saudi Arabia announced that after 2023, it will cease contracting with international companies with regional headquarters located outside of the kingdom.

The ultimatum comes a month after it invited multinationals to relocate their headquarters from the United Arab Emirates to Riyadh, promising benefits such as zero corporate taxes for 50 years.

Despite recent image-building efforts and being the Middle East’s largest economy, Saudi Arabia is home to less than 5% of the region’s headquarters, the majority of which are located in the UAE, where social policies are relatively liberal. “There is only one Dubai,” Emirati political analyst Abdulkhaleq Abdulla told Al-Monitor, noting attempts to emulate it by several cities across the region have been unsuccessful.

The conservative kingdom has also struggled to attract the foreign investments required to achieve Vision 2030, Crown Prince Mohammed bin Salman’s ambitious reform plan. In 2019, it received a third of the foreign direct investment the UAE attracted.

Saudi officials have denied working to undermine Dubai's dominance as the region’s business hub, and Saudi commentator Ali Shihabi told Al-Monitor, “People are overdramatising this issue.” The kingdom wants companies benefiting from multi-billion-dollar government contracts “to make more of a commitment to the country,” Shihabi argued.

The competition within the GCC for investment might seem at odds with the spirit of cooperation and unity enshrined in its 1981 charter.

The region is still healing from wounds caused by an embargo imposed in 2017 on Qatar by its Gulf neighbors.

“The role of the GCC as a venue to coordinate economic policies across the Gulf countries has to some extent been falling short of expectations,” said Jamil Sawda, co-founder of the Geneva-based consultancy Certum Global Policy Advisors.

Fiscal policy response to COVID-19's economic fallout has shown “a lack of coordination,” Sawda told Al-Monitor, adding that Riyadh’s unilateral decision to triple its value-added tax rate in July 2020 has “increased fragmentation within the GCC bloc.”

GCC member states previously agreed to introduce a VAT system at a unified rate of 5% by 2018. Still, Qatar and Kuwait have yet to announce a date for its implementation, while Oman repeatedly delayed the tax and is now expected to introduce it in April 2021.

Previous plans to establish a single GCC currency comparable to the European Union’s euro appear to have been indefinitely shelved. And although a repeatedly delayed GCC railway project stretching across the Arabian Peninsula is now expected to be partially completed in 2023, Qatar, part of the original proposal, is no longer mentioned.

In the race to attract foreign investors, the UAE doubled down on liberalization policies, allowing unmarried couples to live together and permitting foreigners to avoid Islamic Shariah courts on familial issues. In January, the country opened a path to citizenship for select foreigners, a rare move for the Gulf, to attract talent to the Emirati economy.

“More evidence that in the post-pandemic Gulf, its every man for himself,” tweeted Kristin Smith Diwan, a senior resident scholar at the Arab Gulf States Institute in Washington.

Despite disappointing economic integration expectations, the GCC remains a venue for regional initiatives such as the GCC Common Market, which consolidates the region-wide market by allowing free movement of people and goods since 2008. Although intra-GCC non-oil trade remains low at around 10% of total non-oil trade, it has been growing.

Further opportunities for regional cooperation arose after the UAE and Bahrain normalized relations with Israel following several decades of unofficial ties. “The regional story is even more intact, more so than it has been for arguably ever,” Joe Hepworth, Middle East director for the economic development advisory firm OCO Global, told Al-Monitor.

Analysts wonder whether the economic mandate of the GCC could shift toward a regional powerhouse coordinating economic policies pursued independently by the six Gulf states to diversify from oil and gas exports.

“Those who think the GCC is dead because of so many ups and downs are completely wrong,” said Abdulla, noting the GCC is the Arab world’s longest lasting economic integration experiment. As trade blocs gain importance globally, the Emirati academic said the UAE and Saudi economies could “complement each other beautifully.”

In the era of intra-Gulf economic rivalries, specialization might offer promising opportunities. Abu Dhabi’s free zone twofour54 wants to grow the UAE into a global gaming hub, while Bahrain has positioned itself as the Middle East’s leading financial technology hub by establishing the Bahrain Fintech Bay in 2018.

Yet Bahrain remains above all a hub for companies eying the Saudi market — a Bahraini official recently labelled the island nation “the destination of choice for international companies seeking a regional base with access to Saudi Arabia” — and would be the “obvious loser” of Riyadh compelling companies to relocalize headquarters, Hepworth believes.

A source close to Gulf policy-making circles told Al-Monitor on condition of anonymity that Saudi Arabia and the UAE have the upper hand over the GCC Secretariat and often overlook the economic interests of smaller GCC member states. “Nothing's gonna move forward there unless you have the buy-in of the two Gulf heavyweights.”