Israel approved the shipment after reportedly considering tying the delivery to the release of Israeli captives in the Hamas-run Palestinian territory. 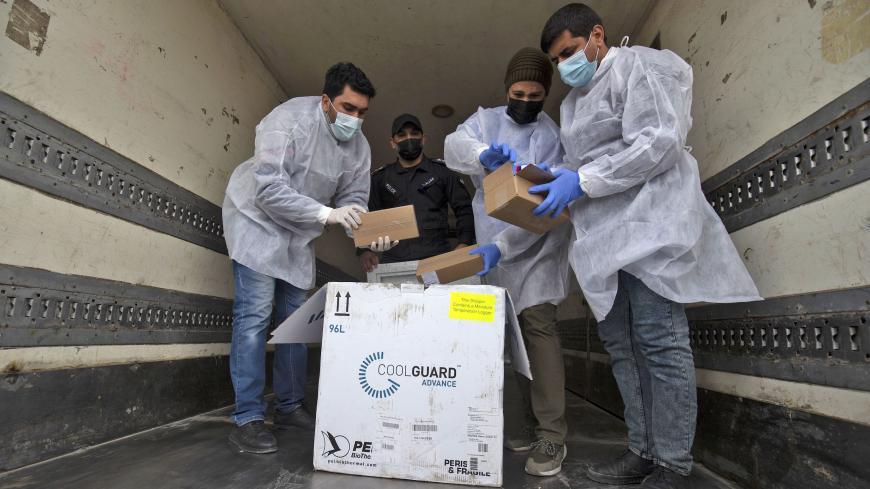 Palestinian health workers unload the first arriving shipment of doses of Russia's Sputnik V vaccine for COVID-19, on the Palestinian side of the Kerem Shalom border crossing south of Rafah in the southern Gaza Strip on Feb. 17, 2021. - SAID KHATIB/AFP via Getty Images

The Gaza Strip received its first batch of coronavirus vaccines on Wednesday after Israel agreed to permit the delivery.

The Palestinian Authority said it sent 2,000 doses of the Russian Sputnik V vaccine to Gaza from Ramallah in the West Bank, the PA-run WAFA News Agency reported.

An Israeli defense official told the Associated Press that Israel approved the delivery to avoid a health crisis in the Palestinian territory. A Gaza health official said the doses would be administered to vulnerable people and then to medical staff.

The PA had accused Israel of refusing to allow coronavirus vaccines into the enclave. Palestinian Health Minister Mai Alkaila said on Monday that Israeli authorities were blocking delivery of the doses.

Israeli officials were reportedly concerned that the doses would go to the Hamas political and military organization and considered conditioning delivery on the release of Israeli captives and bodies being held by Hamas in Gaza.

Gaza is controlled internally by Hamas. Israel controls its airspace, maritime territory and land border with Israel. Israel and Egypt, which also shares a land border with Gaza, have maintained a blockade over the Strip since 2007, when Hamas won control over the region.

Hamas does not recognize Israel but they do communicate on some issues, including prisoner exchanges and cease-fires.

Israel says the legal responsibility for vaccinating Palestinians lies with the PA, but rights groups counter that Israel bears this responsibility as the occupying power. The PA has not publicly asked Israel for vaccines and said it received doses through the World Health Organization.

The PA, based in the West Bank, is recognized by much of the international community as the legitimate representative of the Palestinians. PA-Hamas relations have improved recently and they are preparing to hold Palestinian elections in May.

The United Nations regards both the West Bank and Gaza as occupied by Israel, though Israel sees the situation differently.

Israel has been lauded for its speedy COVID-19 vaccine rollout and leads the world in doses administered per capita. Israel has also received criticism for the much slower vaccine deployment in the Palestinian territories.

The PA began its vaccination campaign early this month after quietly receiving doses via Israel. Palestinian citizens of Israel and Palestinian residents of Jerusalem were eligible to receive the vaccine alongside other Israelis. Israel’s largest city of Tel Aviv is now in the process of vaccinating foreigners.

The PA recorded 1,432 new COVID-19 cases on Wednesday, in addition to eight deaths.