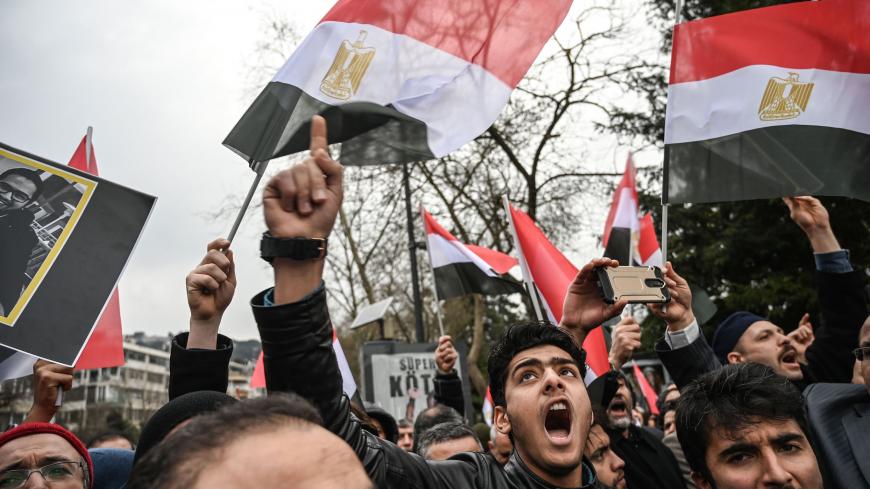 People shout slogans and hold Egyptian flags in front of the Egyptian Consulate in Istanbul during a demonstration against death penalties in Egypt after the recent execution of nine men, Turkey, March 2, 2019. - OZAN KOSE/AFP via Getty Images

CAIRO — Egyptian opposition groups  announced Feb. 11 during a press conference held in Istanbul the formation of a unified political front for coordination between opposition forces abroad to work toward change in Egypt and to topple President Abdel Fattah al-Sisi’s regime.

The timing of the launch may be sparked by hopes that the Biden administraton will emphasize human rights in its dealings with Egypt, and put more pressure on Sisi to accommodate political dissent.

The front, named the Union of Egyptian National Forces, announced the formation of a presidential council, a council of elders and a higher committee comprising 100 members, including Egyptian prominent figures, national forces, political parties and independent figures based abroad mainly in Europe, the United States, Turkey, Canada, New Zealand, Malaysia and South Korea, as well as several Arab countries. Membership is open to any Egyptian who wants to join the union.

While the group includes some familiar names, its ability to influence change in both Cairo and Washington is likely limited. On Feb. 16, the Biden administration approved a $197 million sale of 168 tactical missiles to bolster Egypt’s coastal and Suez Canal defenses last week. While concerns remain over crackdown on political dissent, Sisi's hold on power in Cairo seems as strong as ever, and the country's economy is weathering the coronavirus pandemic better than most in the region.

The inauguration of the exiled opposition union coincided with the 10th anniversary of late Egyptian President Hosni Mubarak’s resignation on Feb. 11, 2011, in the wake of the January 25 Revolution.

Ayman Nour, a prominent opposition figure in exile who was named head of the newly formed Union of Egyptian National Forces, told Anadolu News Agency Feb. 11 that the union prepared a document that comprises 20 items, including preparing a transitional phase to conduct constitutional and legislative reforms and pave the way for the elections during which each citizen would choose their ruler and representative freely. The document also calls for the release of prisoners of conscience and detainees, the reform of the economic system and the accomplishment of social justice.

Nour noted that the convening parties that will represent the union in the next stage domestically or abroad agreed on the document.

Ahmed Ban, a researcher on the affairs of Islamist groups, told Al-Monitor that the union is the first of its kind since the outbreak of the June 30 Revolution and the fall of the Muslim Brotherhood’s rule in Egypt.

On June 13, 2013, millions of Egyptians took to the streets in massive protests across Egypt to call for the ouster of Brotherhood-affiliated President Mohammed Morsi and for holding early presidential elections. Morsi had been sworn in for a four-year term on June 30, 2012, after winning 52% of the vote in the first elections since Mubarak's ouster.

Ban said that the timing of the union’s formation is related to the current political climate and the hope for increased pressure on Egypt in Washington. The Muslim Brotherhood and other opposition factions are hoping that Biden will pressure Egypt on democracy and human rights, he said.

A few days after Biden was sworn in as US president on Jan. 20, two Democratic representatives in the US Congress announced Jan. 25 the formation of a bloc dubbed the Egypt Human Rights Caucus tasked with following up on the deterioration of the human rights’ record in Egypt. Several Egyptian members of parliament considered this move an unacceptable meddling in Egypt's internal affairs.

“The Muslim Brotherhood has frequently called on Biden to address the human rights’ situation and the crackdown against the opposition in Egypt, which may indicate the real reasons behind the formation of the union at this time,” Ban added.

As soon as Biden’s victory in the presidential elections was announced, the Muslim Brotherhood released a statement on Nov. 8, 2020, calling on the new US administration to revisit “the policies of supporting and abetting dictatorships.”

In statements to Anadolu Feb. 11, Abdul Mawjoud Dreiri, spokesman for the Foreign Relations Committee in the Freedom and Justice Party, the Muslim Brotherhood’s political arm in Egypt, said, “The formation of the union is different this time because the willingness is there, as are the circumstances for a region in need of stability and reforms. It will speak to the world, and we are betting on making its voice heard.”

He added, “We also expect the US administration headed by Biden to change its perception of the region and of Egypt.”

Gamal Mazloum, a military expert and adviser at the Nasser Military Academy, told Al-Monitor that although the new union is supported by multiple fronts and although Turkey hosted it on its territories, it will not succeed in bringing about change in Egypt. Its provisions are impossible to implement, as they include constitutional reforms and presidential elections. He noted that the Brotherhood is well aware of this impossibility, but it is using this step to stir action in Egypt and gather more foreign pressure on the state to release the group’s members and stop confiscating its funds.

On Jan. 17, the Court for Urgent Matters issued a ruling to transfer the funds of 89 members and leaders of the Muslim Brotherhood to the state treasury. The list included the heirs of Morsi, deputy Supreme Guide of the group Khairat al-Shater, the group’s Mufti Abdul Rahman al-Barr and leader in the group Mohammad al-Baltaji, among others.

Mazloum said that the union was formed because of the Muslim Brotherhood’s desire to stir action and chaos in the Egyptian street and influence citizens in an attempt to pit people against the regime and play on the deterioration of the economy, the tough living conditions and the declining level of income due to the liberalization of the exchange rate and the economic reform program adopted by the government.

On Nov. 3, 2016, the Central Bank of Egypt announced in a statement the liberalization of the exchange rate based on the supply and demand mechanisms. The move led to a hike in prices of commodities and basic services and reduced fuel subsidies.  According to official statements of the Central Bank on Oct. 25, 2020, foreign debt rose to $123.5 billion.

But Egypt's economic record during the coronavirus pandemic has been impressive, so the economic case against Sisi is hard to make, at least by regional standards and according to the numbers. Although structural challenges remain and life is challenging for many citizens, Egypt is the only Middle Eastern economy expected to grow this year, by 2.8%. The International Monetary Fund credits Sisi for undertaking "proactive measures" to address health and social needs to mitigate the impact of the virus.

The US State Department, in announcing the arms sales to Egypt last week, said Egypt “continues to be an important strategic partner in the Middle East.”