Candidates to replace Prime Minister Benjamin Netanyahu warn that like his close ally the outgoing US president, he's capable of the kind of incitement that led to riots in the US capital. 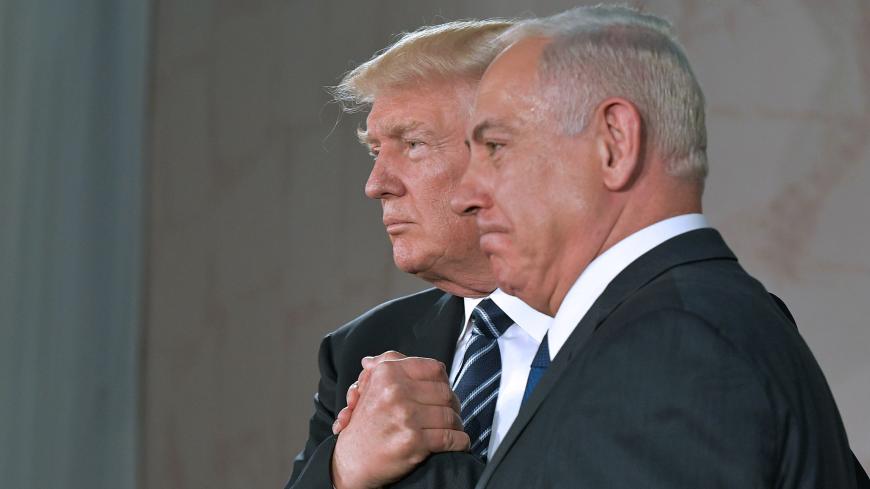 US President Donald Trump (L) and Israel's Prime Minister Benjamin Netanyahu shake hands after delivering a speech at the Israel Museum in Jerusalem on May 23, 2017. - MANDEL NGAN/AFP via Getty Images

On Jan. 8, former Prime Minister Ehud Barak posted a photo of a massive billboard from a previous Israeli election campaign showing a beaming Prime Minister Benjamin Netanyahu standing alongside a broadly smiling US President Donald Trump. Next to the photo Barak tweeted, “The conmen’s league. Political Siamese twins. Both narcissists, both claiming to have been framed, both serial liars contemptuous of their followers, inciting against the legal system. Both fraudsters insanely self-centered and willing to assassinate democracy. The Americans have already disposed of theirs, at a heavy cost. It is now our turn.”

In a Haaretz article run the same day, Barak urged President Reuven Rivlin to declare that Netanyahu cannot serve as prime minister given his indictment and ongoing trial on a charge of bribery, even though the law does not forbid him from running for office. Barak said the president must make the pronouncement before the Feb. 4 deadline for submitting the parties’ candidate lists for the March 23 elections “so that those compiling the lists take it into account and citizens are aware of it before they head for the ballot box.”

Barak was not the only one to draw a parallel between Netanyahu and his supporters and the bloody mob attack on Capitol Hill by Trump supporters. Netanyahu’s political opponents and opinion-shapers on social media have sought to adapt the incredibly unsettling events in the US capital to the political situation and division in Israel and to portray Netanyahu as Trump's twin.

Netanyahu condemned the ransacking of the Capitol during a Jan. 7 meeting with visiting US Treasury Secretary Steven Mnuchin. “American democracy has always inspired me. Lawlessness and violence are the opposite of the values we know Americans and Israelis cherish. The rampage at the Capitol yesterday was a disgraceful act that must be vigorously condemned,” he said.

However, his statement did not do Netanyahu much good, as critics noted that he had issued it many hours after most world leaders had condemned the shocking events. Since the assault on Congress, Netanyahu has found himself on the wrong side of history. His close friendship with Trump has become a cudgel in the hands of his many rivals, who have been forced in recent months to halfheartedly praise the normalization by Arab states of ties with Israel brought about by the American and Israeli leaders.

The shameful end of the Trump presidency has tainted Netanyahu, overshadowing his role in Israel’s stunning vaccination campaign against the coronavirus that will see a majority of Israelis inoculated in the coming weeks. Even before the Washington riot, many Israelis viewed Netanyahu as responsible for the unprecedented political and social upheaval shaking the country over the past two years. The most recent events have prompted an inevitable comparison with the ongoing chaos in Israel.

Unlike the pro-Trump demonstration in Washington, in Israel, the mass demonstrations in recent months outside Netanyahu’s Jerusalem residence are calling for the prime minister’s ouster. The prime minister’s many critics insist that like Trump, Netanyahu would try to dismantle Israeli democracy and refuse to concede the results even if defeated in March. Netanyahu’s supporters are being compared to Trump’s, and pundits are wondering whether a Washington-type scenario could play out in Jerusalem, too.

Politicians challenging Netanyahu in the coming elections have been echoing the message that such an imbroglio is right around the corner. Defense Minister Benny Gantz said the images from Washington “hurt the heart of anyone who believes in democracy.” Gantz went on, “Unfortunately, we in Israel are witnessing attempts to delegitimize decisions by law enforcement officials and the judiciary, to lash out at state institutions and undermine public trust in them. To avoid ever deteriorating into radical situations of rejecting the people’s vote or court rulings, every leader in Israel and the world must declare loudly and clearly: Come what may, we will accept the people’s decision, the courts’ rulings and the Knesset’s votes.” His meaning was clear: Should Netanyahu lose in March, violent street protests would follow.

The chair of the newly formed “Hope for Israel” Party, Gideon Saar, who is shaping up to be Netanyahu’s chief challenger for the premiership, tweeted that he was saddened by events in Washington but was nonetheless confident of an orderly transition of power “in the United States, our greatest friend in the world.” He added, “The events serve as an important reminder of the dangers of polarization and extremism in society. We must never take democracy and its institutions for granted.” While he was less emphatic than Gantz, given his bid to enlist the support of right-wing voters who admire Trump, the subtext of his message was clear.

The major question is whether what appears to be Trump’s legacy of division, misinformation and incitement to violence that ended in bloodshed would taint Netanyahu and the constituencies identified with him and cost him significant electoral damage.

A growing number of Netanyahu political rivals will strive to see it happen. However, recent history has shown that his opponents’ efforts to depict Netanyahu as an unrestrained radical can only go so far. At some point, they become counterproductive, as the deep political right closely identifies with Netanyahu and his Likud. His electorate rebels when his real achievements, such as the normalization agreements, the calm along the Gaza border and the vaccination operation are called into question. The disparaging of Netanyahu’s accomplishments triggers a sense of persecution among his followers and has poured fuel on every election campaign since Netanyahu first came to power in 1996.

Such was the case following the November 1995 assassination of Prime Minister Yitzhak Rabin. Netanyahu served at the time as head of the Knesset opposition. He was accused of playing a significant role in the incitement that prompted a young right-wing radical to kill the prime minister. The accusations united the right-wing public to hand him a victory. Almost 21 years on, will the antagonism he generates this time produce the same type of counter-reaction in his favor?