A presidential decree has paved the way for Turkish police to use military and intelligence resources to crack down on public protests. 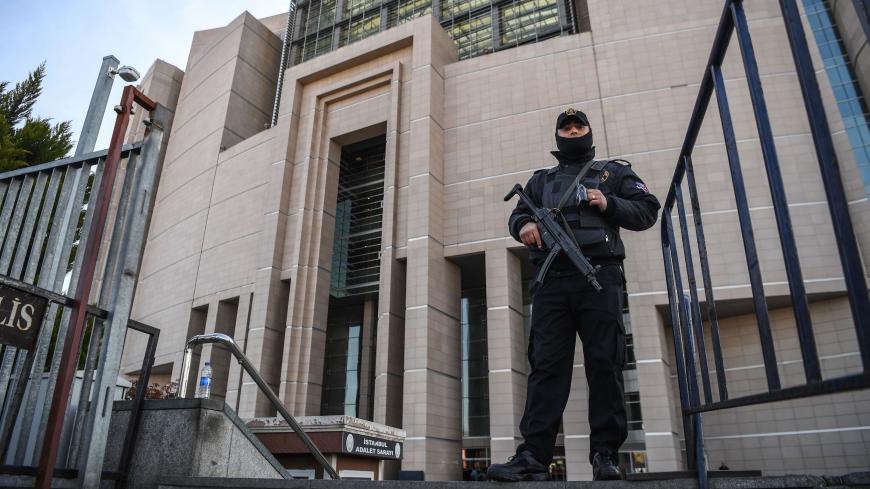 A Turkish policeman stands guard outside the courthouse in Istanbul on March 28, 2019, during the trial of Metin Topuz, an US consulate staffer accused of spying and attempting to overthrow the government.

A recent presidential decree concerning the weapons and other assets of Turkey’s military and security bodies has generated little debate in Turkey but might have crucial consequences down the road as President Recep Tayyip Erdogan deals with growing opposition and dissent.

The Jan. 6 decree amended regulations on the properties of the police and the gendarmerie forces, both attached to the Interior Ministry, the military and the National Intelligence Agency (MIT). Those bodies can now transfer moveable properties to one another “without any conditions” in the event of “terrorist and societal incidents and violent movements that seriously threaten national security, public order and public security.” The amendment also allows the army to send military equipment to “allied and friendly countries."

Since 2013, the government’s primary internal security concern has been the eruption of a mass protest movement akin to that year's Gezi Park demonstrations, which began as a small environmentalist protest in central Istanbul but quickly grew into nationwide anti-government protests that simmered throughout the summer. The authorities have already imposed severe restrictions on street protests, cracking down even on demonstrations against femicide or child abuse.

The decree came only days after a violent confrontation between police and students at Istanbul’s Bosphorus University, one of the country’s most prestigious. The police battered, tear-gassed and detained demonstrators who were protesting Erdogan’s appointment of a member of his party with dubious academic credentials as rector of the university.

The easy transfer of weapons and equipment between the military, the intelligence service, the police and the gendarmerie raises the specter of risky consequences for Turkey at a time when parliamentary oversight and public scrutiny of the government have waned dramatically since Erdogan assumed sweeping executive powers in 2018.

One cannot help but recall the 1990s, when rogue groups emerged in the security forces, acting outside the law and collaborating with the underworld in the name of fighting terrorism, namely the Kurdistan Workers Party (PKK), a designated terrorist group that has fought Ankara since 1984. Such links were publicly exposed in the memorable Susurluk scandal in November 1996. A vehicle involved in a road accident near the northwestern town of Susurluk turned out to contain guns fitted with silencers, while its passengers included a senior police chief, a wanted hit man and a Kurdish parliament member whose clan backed Ankara against the PKK. Ensuing investigations established that the police were in possession of heavy weapons taken clandestinely from the military. In February 1997, the general staff formally asked the police to hand all heavy weaponry over, and it took many months before the process was completed.

What prompted Ankara to lay the groundwork now for the use of “military power” against protests or public unrest? The decree does not specify a reason for the amendment, while the terms and scope of the security forces’ response to public unrest, including the use of firearms, remains unchanged.

Furthermore, the amendment sets no limits on what assets the military can hand over to the police, meaning that equipment such as F-16 fighter jets, tanks and heavy weaponry are not exempt in theory. The term “movable property” is rather broad and ambiguous, and the absence of any limits on the transfer of weapons and equipment typical for conventional warfare is a source of concern.

Equally concerning is the broad scope of the circumstances in which such handovers can occur. The regulation bundles “terrorist and societal incidents” together, as if referring to crimes of equal severity. It uses the term “societal incident,” without specifying any particular acts, which may apply to any protest, demonstration or unrest, raising questions about the principle of proportionality in using force against incidents of disparate nature.

Terrorism-related crimes are subject to Turkey's terror law, while peaceful public demonstrations are a civic right guaranteed by the constitution. Article 34 of the constitution says, “Everyone has the right to hold unarmed and peaceful meetings and demonstration marches without prior permission.” While using their constitutional right, demonstrators may disturb public order and commit crimes, but such offenses are not treated as terrorism. The ambiguity of the decree, however, allows the government to place all peaceful protests in the scope of the regulation.

The amendment also leaves important technical questions unanswered. For instance, who will make the decisions on equipment handover – local governors and crisis desks or Ankara?

Moreover, the return of transferred weapons appears to be out of the question, with the free-of-charge handovers permanent. Legal responsibility for the weapons and all related ownership, financial and criminal liabilities are handed over as well.

In short, the executive branch is now entitled to make unilateral decisions on a highly delicate issue, free from parliamentary oversight and public scrutiny. This amounts to flouting basic principles of democratic governance such as transparence, accountability and parliamentary oversight of the military and the security and intelligence sectors.

Well-meaning interpreters could argue that the amendment aims to expedite, streamline and add deterrence to the security forces’ response to violent unrest, but given Turkey’s current governance marked by institutional erosion and the suppression of criticism and oversight, the risks largely outweigh any expected benefits.

While “societal incidents” and “violent movements” are abstract terms, it is hard to imagine what public unrests unrelated to organized crime could overwhelm the police and their existing firepower to an extent that would require the transfer of weapons from the military. Clearly, citing “societal incidents” and “violent movements” to justify the handover of weapons by the military and critical intelligence assets by the MIT has nothing to do with the norms of democratic governance.

All in all, Erdogan’s government is increasingly wary of its political fortunes and apparently does not want to leave anything to chance. Public frustration with Ankara is growing amid the country’s unrelenting economic turmoil. Many believe that the economic woes, coupled with political tension and social polarization, will prompt early elections before their scheduled time in 2023. Ankara has long abandoned tolerance to dissent and the latest amendment foreshadows further violations of the freedoms of expression and assembly and other basic democratic rights.