Weeks of heavy rains have created immense hardship for Idlib residents, who are already contending with the war between rebel groups and the government. 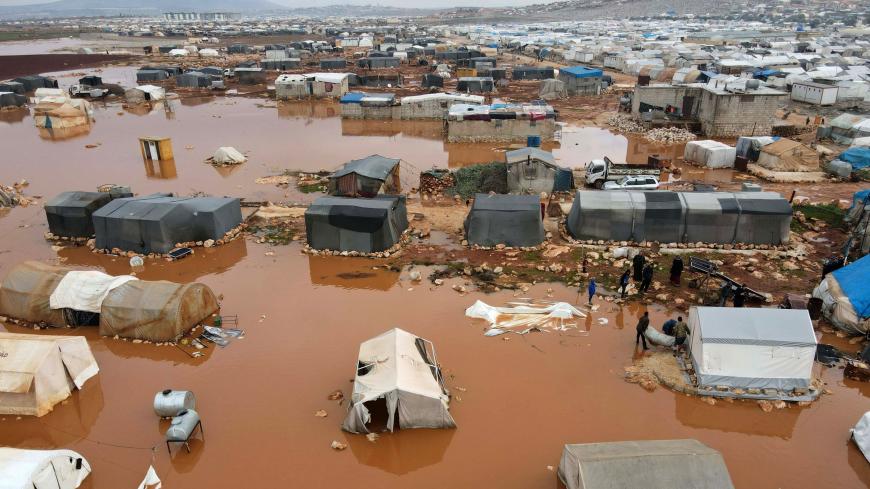 An aerial picture shows flooded tents after heavy rain at a camp for displaced Syrians near the town of Kafr Lusin by the border with Turkey, in the rebel-held northwestern province of Idlib on Jan. 19, 2021. Flooding following heavy rain at displacement camps in northwest Syria has killed a child and damaged or destroyed the tents of thousands of people, according to residents and aid workers. - AAREF WATAD/AFP via Getty Images

More than 21,700 tents have been destroyed by recent rainfall, affecting 121,000 displaced Syrians, the United Nations Office for the Coordination of Humanitarian Affairs said in a statement Friday. At least one person has been killed in addition to three injured, the UN added.

Idlib province in northwest Syria is home to 2.7 million displaced Syrians and is the last rebel stronghold in the country. The Syrian government, backed by Iran and Russia, has retaken most of the rest of the country. Turkish-backed groups control other areas of northern Syria while the Kurdish-led Syrian Democratic Forces control the northeast. Many Idlib residents came from former rebel territories such as Aleppo and Ghouta. The Islamist group Hayat Tahrir al-Sham is dominant in Idlib.

This season’s flooding began in December and has continuously destroyed tents that displaced people live in. One resident of the Al-Lataminah camp in the province told Al-Monitor earlier this month that they use cardboard and fuel converted from plastic to stay warm. She added that organizations do not provide them with heating assistance.

In November, the UN warned about the potential for extreme hardship this winter.

The UN’s deputy regional director for the Syria crisis, Mark Cutts, said Friday at a news briefing in Geneva that providing food, shelter and clean water to northwest Syria is a “massive undertaking.” He said there are not enough camps for all the displaced people, with some people living under trees, according to a statement. The flooding is also compounded by the COVID-19 pandemic and freezing temperatures, he said.

The best thing for Idlib would be for fighting between government and rebel forces to end, Cutts said, adding, “What is needed above all else is an end to the conflict.”