The agreement was struck a day after Saudi Arabia agreed to reopen its air, land and sea borders to rival Qatar. 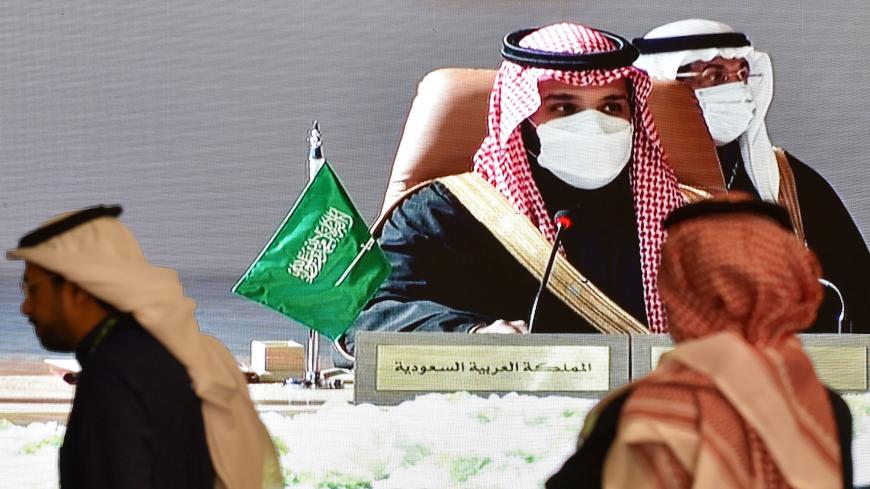 Journalists watch Saudi Crown Prince Mohammed bin Salman address attendees on a screen in the media center ahead of the 41st Gulf Cooperation Council summit in the city of al-Ula in northwestern Saudi Arabia Jan. 5, 2021. - FAYEZ NURELDINE/AFP via Getty Images

Qatar and its Gulf Arab neighbors have signed a “solidarity and stability” pact, Saudi Crown Prince Mohammed bin Salman announced Tuesday, a day after Riyadh agreed to lift its years-long blockade of Doha.

The accord “emphasizes Gulf, Arab and Islamic solidarity and stability as well as the strengthening of friendship and brotherhood between our countries and people," he said of the agreement struck during the annual summit of the six-member Gulf Cooperation Council (GCC).

Since June 2017, Qatar has remained under an air, land and sea embargo imposed by Saudi Arabia, the United Arab Emirates, Bahrain and Egypt. The Saudi-led bloc also severed diplomatic relations with the gas-rich country, accusing it of funding terrorism and backing its regional rival Iran.

The three-year-row involving some of Washington’s top Middle East allies reached a turning point on Monday, when Kuwait's foreign minister announced that Saudi Arabia would reopen its air, land and sea borders with Qatar. In another positive sign, Qatar’s Emir Sheikh Tamim bin Hamad al-Thani was greeted with a hug from bin Salman on Tuesday after arriving in the Saudi desert city of Al Ula to attend the GCC summit.

In his opening remarks at Tuesday's meeting, bin Salman called for regional unity to confront Iranian efforts “to shake up the stability of the region.” Saudi Arabia’s de facto leader also thanked GCC leaders for “their bold steps” and expressed his gratitude toward the United States and Kuwait for their roles in brokering a reconciliation.

US President Donald Trump has made healing the Gulf rift a foreign policy priority before he leaves office later this month. His son-in-law, White House senior adviser Jared Kushner, attended the GCC meeting on Tuesday.