The man and two accomplices reportedly were inspired by the Islamic State to stab tourists and Jordanian police in the ancient city of Jerash. 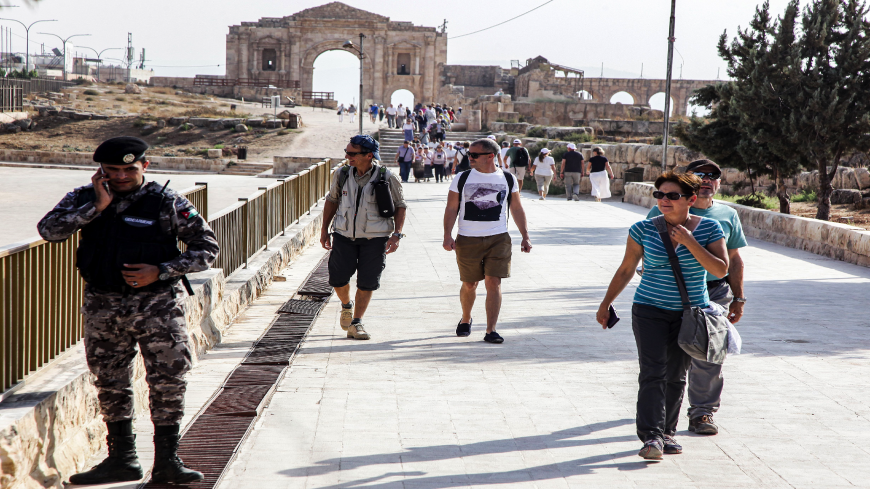 This picture taken on Nov. 6, 2019, shows a view of the scene where several people, including tourists along with a Jordanian tour guide and a security officer, were wounded in a knife attack in the site of Jerash, a popular attraction 50 kilometers north of the capital. It is not the first time tourist sites have been targeted by attacks in Jordan. In December 2016, in Karak, home to one of the region's biggest Crusader castles, 10 people were killed in an attack that also left 30 wounded. The attack was claimed by the Islamic State group, and 10 people were eventually convicted of carrying it out.

A Jordanian court has sentenced a man to death for stabbing tourists and police in 2019.

The State Security Court found the man guilty of terrorism on Tuesday and gave him the death sentence, the state-run Jordan News Agency, also known as Petra, reported.

The conviction stems from the November 2019 stabbing attack in the city of Jerash north of the capital, Amman. A lone assailant stabbed several people at a Roman ruins archaeological site there. Three Mexican tourists and one Swiss woman were injured, as were a tour guide, a driver and three police, according to Petra. Nobody died in the incident.

The court also sentenced one man to life imprisonment and another to seven years for their roles in the incident. Petra described them as “accomplices.” All men are from Jerash and were inspired by material they read from the Islamic State (IS), according to the agency.

The Associated Press identified the man convicted to death as Mustafa Abu Tuameh.

In 2016, IS shot dead 10 people in the city of Karak. Also that year, a Jordanian security guard shot and killed three US soldiers at the King Faisal Air Base.