The Young Settlements Forum launched Jan. 4 a hunger strike, calling on Prime Minister Benjamin Netanyahu to abandon his rapprochement with the Arab public and advance instead the legalizing of 70 wildcat outposts in the West Bank. 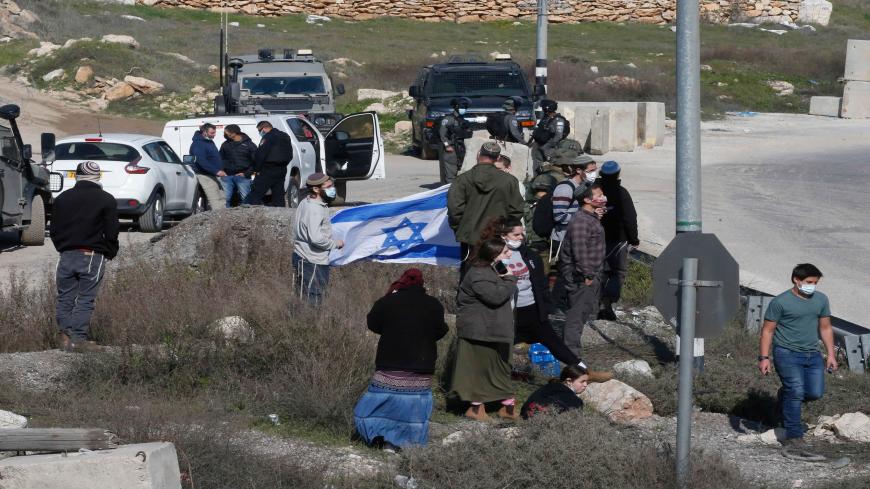 Israeli settlers gather at a junction with security forces arriving to block Palestinians trying to reach their lands confiscated by Israeli authorities, during a protest in the village of Halhul, north of Hebron, the West Bank, Jan. 4, 2021. - Hazem Bader/AFP via Getty Images

A group of settlers called the Young Settlements Forum launched Jan. 4 a hunger strike outside the office of Prime Minister Benjamin Netanyahu. The activists are calling on Netanyahu to abandon his latest rapprochement with Israeli-Arab legislator Mansour Abbas and to legalize West Bank outposts before the March 23 elections. Head of the Young Settlement Forum Eliyahu Atia explained that he and three others from the group plan to start a hunger strike. He expressed his hopes that the number of people embarking on the strike will grow over the coming days.

The Young Settlement Forum, together with the Yesha Council, the settlement’s umbrella organization, and the Knesset Land of Israel Caucus, erected a protest tent outside Netanyahu’s office Dec. 29, shortly after publications over a deal between the prime minister and Knesset member Abbas. Reportedly, the prime minister agreed to legalize three unrecognized Bedouin villages in the south of Israel, in exchange for Abbas’ support of Netanyahu ahead of the March elections. Reports also claimed that Netanyahu agreed to cancel government plans for legalizing some 70 West Bank settlement outposts in the coming weeks, legalizing instead only three of them.

Speaking at the tent yesterday, head of the Yesha Council David Elhayani called on Netanyahu to distance himself from the Arab electorate, which are not his political core base. He specifically referred to the Jan. 2 visit by Netanyahu of the Arab town Umm al-Fahm, where the prime minister had his photo taken with an Israeli-Arab citizen who was the millionth Israeli to receive the COVID-19 vaccine. "Mr. Prime Minister, this week you took the time to get your picture taken with the 1-million-person to be vaccinated, but you did not find the time to call upon the Young Settlement Forum people and talk with them. They are your voters. They are your base. Don’t betray them. Don’t let your actions force them to choose another path. It is sad that we arrived to this situation where the leadership of the young settlers must go on a hunger strike. Whoever is not behaving as the political right should not expect votes for him," warned Elhayani.

As aforementioned, the settlers were hoping for dozens of wildcat settlements, mostly constructed on private Palestinian lands, to be legalized beginning of 2021. In late November, Settlement Affairs Minister Tzachi Hanegbi announced at a Knesset plenum that the government will advance a proposal to legalize several West Bank outposts. Hanegbi also said that he had received the prime minister’s approval to advance this plan in cooperation with Minister of Civil and Social Affairs in the Defense Ministry Michael Biton from the Blue and White party.

Still, Biton himself said that Hanegbi did not clear the announcement with him, emphasizing that he will back such a move only if it has the attorney general’s approval. Visiting the protest tent Dec. 30, Hanegbi accused Defense Minister Benny Gantz of the government’s failure to declare it intends to legalize outposts. “We are going to work very hard to convince the minister of defense to bring a government decision with the prime minister of Israel,” said Hanegbi.