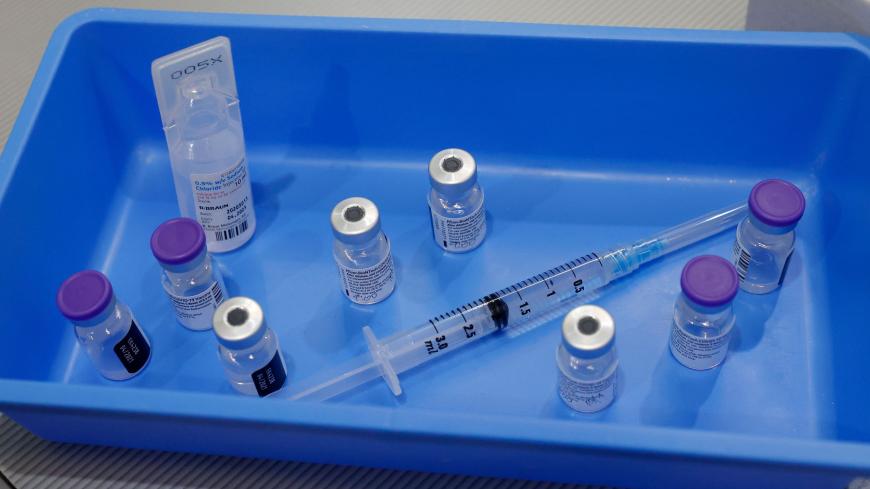 A syringe and vials of the Pfizer-BioNTech COVID-19 vaccine are pictured at the Sheba Medical Center, Israel's largest hospital, in Ramat Gan near the coastal city of Tel Aviv, on Jan. 14, 2021. - JACK GUEZ/AFP via Getty Images

The Israel Prisons Service said on Jan. 17 it will begin vaccinating all inmates this week, including Palestinians. A statement issued by the IPS said, “Following the vaccination of staff … the vaccination of detainees will begin in prisons in accordance with medical and operational protocols established by the Prison Service.” According to several publications yesterday, vaccination of prisoners aged 60 and older is rolling out.

The IPS announcement came three days after Health Minister Yuli Edelstein pledged to start vaccinating all prisoners the following week, including Palestinian security detainees. Edelstein stated, “We adhere to all of the priority committee’s guidelines,” explaining that the inmates will be vaccinated according to the national vaccination priorities set by his ministry: starting with the elderly and vulnerable.

On the same day that Edelstein made this promise, the IPS published its weekly update on the pandemic in incarceration facilities. It said that as of Jan. 14, 153 inmates held at Israeli facilities have been confirmed to be infected, 41 of them from an incident at the Ketziot prison and 30 from another at Ramon. In a second communique that day, the IPS gave details on treatment at Ramon. It said that the IPS continues to do what is necessary to prevent the spread of the virus within the detention facilities, adding that only official announcements and instructions to the public should be relied upon.

Between the lines of the three announcements could be read a war between Edelstein and Attorney General Avichai Mandelblit and Public Security Minister Amir Ohana. Edelstein's Jan. 14 announcement in fact overrode objections from Ohana, who is the minister with authority over prisons.

Israel launched its vaccination drive on Dec. 27, before which human rights groups had called for elderly prisoners to be included. Chairman of the PLO’s Prisoners Affairs Commission Qadri Abu Bakr told the press he had been informed by the IPS that they would start vaccinating security prisoners within days.

Abu Bakr's statement apparently hit a nerve. In reaction, Ohana instructed prison officials to hold off vaccinating Palestinian inmates until further notice. A statement from his office said he’d ordered the IPS to only vaccinate prison staff at this stage and that security prisoners shouldn’t be given vaccines without his specific permission. Ohana’s ban reportedly included all prisoners, not just Palestinians, reasoning that prison guards should precede prisoners, who will follow only after a larger number of non-incarcerated Israelis are inoculated.

The minister’s instructions triggered an avalanche of angry reactions. The Association for Prisoners Rights petitioned the Supreme Court, demanding all inmates over 60 be vaccinated, just like other Israeli residents. Mandelblit warned Ohana in a letter that the government would not defend his position in court. “Your injunction suffers from a clear lack of authority and is contrary to the requirements of the law,” stated Mandelblit, also noting that Ohana’s instructions contrasted with the position of the Health Ministry.

President Reuven Rivlin lambasted Ohana’s decision: “Preventing life-saving medical treatment from people in prison — whether due to a sentence imposed on them by the court or due to detention prior to sentencing — is inconsistent with our values, the values ​​of the state, Judaism and democracy.” The president requested that the matter be resolved as soon as possible in order to maintain the health of the prisoners and the prison service staff.

Defense Minister Benny Gantz also called on Ohana to reverse the ban. In a letter addressed to Prime Minister Benjamin Netanyahu, Gantz wrote, “A public security minister who has lost it and a prime minister who gave up and let this farce continue — that’s the only way to explain not vaccinating prisoners over the age of 60. This is a move that is illegal, politically motivated and life threatening.”