Some Israelis are worried that the agreement with Pfizer prioritizing Israel in its vaccine distribution involves the provision of personal information to the company. 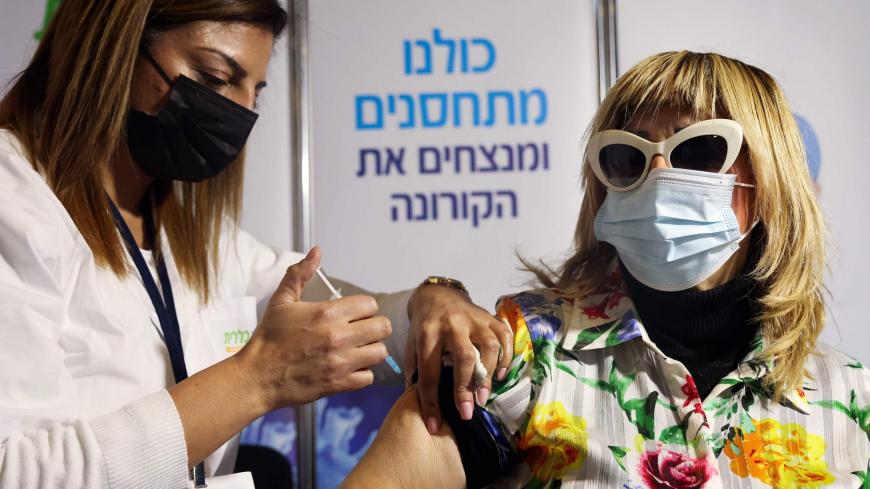 An Israeli health worker administers a dose of the Pfizer-BioNtech COVID-19 vaccine at the Clalit Health Services kiosk at the Pais Arena Sport Hall in Jerusalem Jan. 21, 2021. - EMMANUEL DUNAND/AFP via Getty Images

Israel’s Ministry of Health recently signed an agreement on collecting epidemiological data with coronavirus vaccine maker Pfizer. According to the agreement, Israel will provide statistical information and epidemiological data about the impact of the COVID-19 vaccine on Israelis who received it to allow the company to assess its efficiency. In exchange for this information, Pfizer promised to give Israel preference over other countries in obtaining the vaccine and that it would provide enough vaccines to vaccinate the entire adult population.

There have been complaints about a lack of transparency around the agreement. They were especially concerned about the transfer of medical information pertaining to Israelis who were vaccinated that could allegedly be given to Pfizer without the patients’ consent. People wondered how Pfizer would use this information and if there was any risk that personal information about people receiving the vaccine would be revealed to the company. They asked how the government planned to ensure that privacy would not be violated, particularly when it comes to medical issues.

In response to these concerns, the Health Ministry announced that only general epidemiological information would be given to Pfizer and that this information was already available to anyone who wanted it. However, if that is the case, why would Pfizer sign an agreement obligating it to give preferential treatment to a relatively small country like Israel?

The publication led the nongovernmental organization Movement for Quality Government in Israel to demand that Prime Minister Benjamin Netanyahu, Defense and Justice Minister Benny Gantz, Health Minister Yuli Edelstein and the Privacy Protection Authority release the details of the agreement with Pfizer. Early this week, the Health Ministry posted the text of the agreement to its website — but parts were blacked out, including sections concerning violations of the agreement’s terms and means of resolving disputes between Pfizer and the State of Israel.

Nevertheless, the Movement for Quality Government congratulated the Health Ministry for posting the document, noting, “We welcome the far-reaching vaccination project in Israel, which is bringing us one more step closer to an end to the health crisis. It would make no sense for the State of Israel to peddle the confidential personal information of its citizens to a private company without first revealing the details of the agreement in a transparent and full way. Congratulations to the Ministry of Health for recognizing the importance of total transparency in its dealings with the public. That is the only way that Israelis can feel confident that their personal information was not exploited behind the scenes to their disadvantage. It is the only way we can be assured that our privacy was protected, and that the necessary means are in place to ensure a full medical vaccination program.”

The nature and quality of the information that Israel is to give Pfizer are not at all clear from the available details of the agreement. While large chunks of the agreement are still secret, Pfizer will not receive the personal medical files of any Israeli citizen, since that would violate the law protecting identifying information.

Yediot Ahronot newspaper's Nadav Eyal has been covering the coronavirus since it first broke out and has followed the agreement closely. He told Al-Monitor, “I am not concerned about this having a negative impact on the vaccination program, because the agreement includes an element of anonymization, which eliminates any possibility of the subjects’ identities being revealed.”

Israel is a dream country for vaccine research because it has one of the lowest percentages of people over 65 in the Organisation for Economic Co-operation and Development and because of its uniquely well organized health insurers. The system means there is an accessible single database of information, unlike in the United States, where health care is notoriously uncoordinated. Nevertheless, despite these advantages, some in Israel are concerned about the agreement and the vaccination program in general, complaining politics are too involved.

Inbal Einav is a laboratory worker at one of the leading medical centers in the country. She told Al-Monitor, “It is important for me to stress that I am not opposed to vaccines in general. I make a point of getting the flu shot every year. On the other hand, in the same breath I say that a vaccine that was developed so rapidly and that is being marketed so aggressively is somewhat disconcerting. A lot about the vaccine remains uncertain. This feels to me like a medical experiment with Israel as Pfizer’s pilot or Stage 3 country. I am certainly worried that all the information will be handed over to Pfizer. I have no doubt that politics are involved. Election politics lie behind this agreement. There is a reason they sealed the protocols of committees dealing with the coronavirus for the next 30 years. I find it suspicious because it is a violation of public trust.”

In contrast, Fateen Baiadsi, a member of the Baqa al-Gharbiyye local council responsible for emergency preparations who established the local vaccination center with the Clalit medical insurance company, told Al-Monitor, “I think that as long as this leads to further development and is helpful in researching the vaccine or improving its efficiency, I see no problem with the agreement, provided that it meets the legal terms and ensures the privacy of Israeli citizens and their personal medical information. It is important to remember that we are in the midst of a war against the virus. Given the circumstances, we need to use all means at our disposal to win that war.”