Israel turns its back on French-Egyptian Mideast initiative 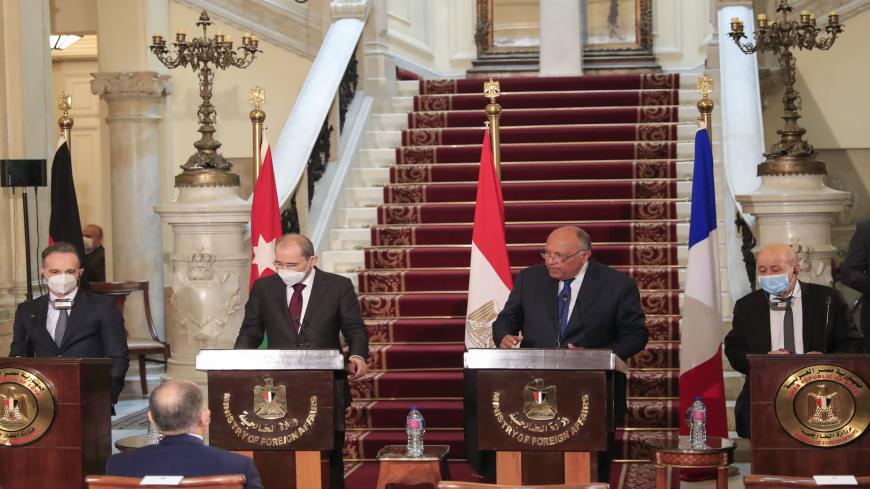 For Israel, the past few days have been full of diplomatic activity. On Jan. 5, the Foreign Ministry picked Ambassador Eytan Na’eh to head its future mission in Abu Dhabi. A few days later, the ministry picked former Ambassador David Govrin to head its future liaison office in Rabat. According to other reports, Foreign Minister Gabi Ashkenazi had met this past weekend with his Jordanian counterpart, Ayman Safadi. The discreet meeting had focused on promoting strategic interests, including issues pertaining to the security, economic and civil ties between the two countries. The two men had met last at the beginning of December. On Jan. 13, the Emirates announced that Israeli tourists could now enter the country without a pre-requested visa. On the very same day, Israeli and Moroccan representatives signed aviation agreements to establish direct flights between Rabat and Tel Aviv.

Prime Minister Benjamin Netanyahu has also been busy diplomatically. On Jan. 11, he participated in an international online forum with six other heads of states, exposing Israel’s relentless mass vaccination drive. The forum had been established last April, in the midst of the first wave of the coronavirus pandemic. The idea was for these countries to share their experiences in successfully battling the pandemic. The driving forces behind this forum were Austrian Chancellor Sebastian Kurz and Netanyahu.

One could say that this list is indeed impressive, reflecting Israel’s vitality on different diplomatic stages. However, Israel chose to avoid one major diplomatic rendezvous that took place last week in Cairo. The foreign ministers of Egypt, Jordan, France and Germany met Jan. 11, in an attempt to revive Israeli-Palestinian peace talks. The four ministers had invited Israeli and Palestinian foreign ministers to join them in Cairo. In order to facilitate things, they offered Ashkenazi and Palestinian Minister of Foreign Affairs Riyad al-Malki to meet with them on the same day, at the same venue, but separately.

Ashkenazi was quick to respond that he would not be coming. The official reason was the nationwide lockdown imposed throughout Israel as of Jan. 7 at midnight for a two-week period. Without any commercial flights, Ashkenazi could hardly get to Egypt, his people reasoned. Still, Ashkenazi did not propose any virtual meeting instead. It seems that he preferred to keep his distance. Netanyahu, for his part, made no reference once or ever to this upcoming quartet meeting. With that, Malki decided not to come. He did tough send a message for the participants.

A joint statement issued at the end of the Cairo meeting hinted at the disappointment over Ashkenazi’s reaction. "The ministers discussed their recent contacts with their Palestinian and Israeli counterparts and the views of each party. They also took note of the message addressed by the Palestinian Foreign Minister to the host of the meeting H.E. Sameh Shoukry," the statement read. It continued, "At the end of the meeting, the ministers agreed to reach out to the Palestinians and the Israelis conveying their common vision on the way forward towards peace."

The quartet meeting was significant for several reasons. It followed a first meeting between the four parties last July, with the same goal of reviving Israeli-Palestinian negotiations — perhaps through an international conference. Then in September, at his address to the UN General Assembly, Palestinian President Mahmoud Abbas took up this idea again, offering it international visibility. The European Union had made it a habit of initiating every year or so international conferences and forums for peace in the Middle East. But this habit came to a halt with French President Emmanuel Macron, who decided to leave the Israeli-Palestinian stage to US President Donald Trump. Now that Trump is on his way out, France has apparently decided to step into that arena again.

The reasons behind the French-Egyptian initiative are clear to Israel. Jerusalem knows that with the Biden administration, things could look very different compared with the years Trump spent in the White House. People close to President-elect Joe Biden had already hinted as such during the election campaign and after his November victory. Jerusalem knows that Biden will not offer annexation of West Bank parts, will not hail Israel’s sovereignty over the Golan Heights and will certainly not play the one-sided mediator, the way Trump did. The new administration will push for renewal of talks. Still, that does not mean that Jerusalem would like to see Paris stepping into the picture.

An Israeli diplomat told Al-Monitor Jerusalem is in a bind over the initiative. Over the years, Jerusalem had pushed aside and ignored several French Middle East initiatives. It refused to participate in the 2016 and 2017 Paris Peace Conferences organized by the people of former President Francois Hollande. But ignoring an initiative that involves also Cairo would be more delicate. After a long period of almost two years without an ambassador in Cairo, Israel has now the very experienced and active Amira Oron heading the embassy there.

Paradoxically, it is Paris itself that is cementing Jerusalem’s resistance to such an imitative. On Jan. 12, it issued a statement condemning Israel’s decisions to advance the construction of homes in West Bank settlements, calling on the Israeli authorities not to implement these decisions. A statement issued by the French Foreign Ministry said, "It calls on the parties to avoid any unilateral measures that could undermine the two-state solution based on international law and the agreed parameters." The silence of Jerusalem vis-a-vis this statement spoke volumes. Jerusalem did not even bother rejecting it.