The battle against the bottles: Israel extends law on plastic containers

The Knesset Economics Committee has now approved extending the Bottle Deposit Law, so it will also include family-size plastic bottles. 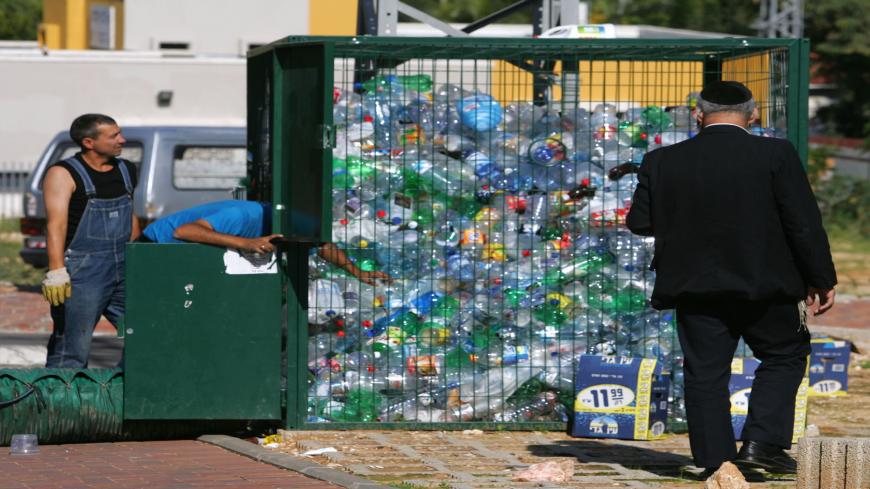 The Knesset’s Economics Committee ruled Dec. 1 for the extension of the 2001 Bottle Deposit Law also to apply to large plastic bottles of 1.5 liters or more — a decision hailed by environmentalists. This means that starting in December, consumers will pay a deposit fee for large plastic bottles, and will get that fee back when they return the bottles to the supermarket. Until now, the deposit mechanism was implemented only to small plastic bottles.

Environmental Protection Minister Gila Gamliel said after the meeting, "We are sharpening the equation that makes big bottle manufacturers and businesses responsible for the pollution they produce. Thanks to the Deposit Law, we will lead the path to clean public spaces and lower the cost of living for consumers, which will result in a direct profit of about 60 million Israeli shekels [$19 million] for consumers. We see these big bottles [dumped] in nature reserves, streams and open spaces. As of Dec. 1, 2021, the situation will change."

The battle until the Dec. 1 decision was very long. Israel Union for Environmental Defense — Adam Teva V’Din — has been championing the campaign for two decades now. The group explains that the original Bottle Deposit Law was implemented only on small bottles, often consumed in restaurants or at work, and less at home. In 2010, the Knesset advanced an amendment to that law to include family-size bottles, but offered a grace period of several years before the amendment would go into effect.

In fact, the Knesset put in place an automatic mechanism. The beverage companies were invited to collect large bottles voluntarily. They had until 2016 to show that they were able to collect at least 55% of all large plastic bottles purchased annually. Failure to reach this goal should have automatically launched the amendment, requiring the supermarkets to collect the bottles and pay back the deposits.

The beverage companies, the distributers and marketing corporations set up an entity to install and operate special bottle bins. But when the time came to evaluate the results, it became clear that the 55% goal had not been achieved. At the same time, Israel went into a political crisis; the Knesset was dissolved in 2017, and the minister replaced. Due to the political brouhaha, the Ministry of Environmental Protection did not publish instructions for the amendment to be implemented. The Knesset’s Economics Committee, which could have decreed further measures, was not convened. It took the arrival of Gamliel to her current position for things to start moving in the right direction.

"In Israel, collection of small plastic bottles proved itself efficient. We have reached the level of 80% for small bottles being collected. For the larger bottles, we have tried the voluntarily collection method, but it did not work. We are striving for a maximal collection rate, so it is only natural that we ask for the law to be implemented," Meirav Abadi, legal counsel (waste and recycling) at Adam Teva V’Din, told Al-Monitor.

"In no other country legislation makes a difference between bottles of different sizes. We believe that if we reach the collection of large quantities of plastic bottles, an incentive would be created for entrepreneurs to establish plants for the treatment of the plastics here in Israel. The bottles won’t be shipped to Turkey the way it is now done," she said.

Adam Teva V’Din are enthusiastic about their achievement, but are also careful. With a continuing political crisis in Israel and the expected March 23 elections, much can still happen by December. For the moment, the beverage companies and Israel’s Industry Association have petitioned the court against implementing the law. The court has refused to place an injection on the implementation, but have asked for further written explanations by Jan. 19, ahead of debating the issue.

A political source told Al-Monitor that the ultra-Orthodox parties also campaign against the amendment. They fear that the law would raise prices of family-size bottles, in great numbers consumed by their constituency, which is relatively poor. Supermarkets are also against the decision, as they do not want the hassle of receiving the empty bottles and refunding them. The environmentalists may have the law on their side, but they also have many interest groups opposing them.