With the government in a perpetual state of crisis, the coronavirus pandemic propelled Israeli mayors to a position of unprecedented prominence. 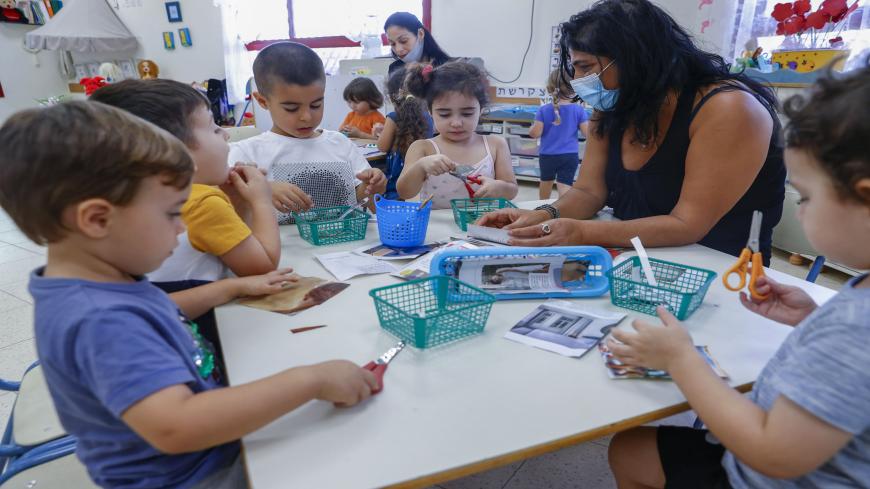 Israeli children take part in activities at a kindergarten in the central city of Shoham, Israel, Oct. 18, 2020. - Jack Guez/AFP via Getty Images

“The Age of Generals is over; the Age of Mayors has begun.” Haim Bibas, mayor of Modi’in-Maccabim-Reut and chairman of the Federation of Local Authorities in Israel, may have been the first to say this, but he was commenting on a very apparent trend in the current election campaign.

Historically, popular mayors and heads of local councils have always been courted by the major parties before an election. What is different this time is the way this has intensified so significantly. Bibas, Beersheba Mayor Ruvik Danilovich and several other local leaders have been approached by the major parties again, while Tel Aviv Mayor Ron Huldai has snatched the reins for himself by forming his own party. This can all be attributed to the coronavirus crisis and the way these local leaders have responded. They reached beyond their traditional authority, seizing the initiative to make major decisions on behalf of their constituents.

The most prominent example of this was a vaccination campaign that conflicted with the government’s explicit instructions. The city of Tel Aviv and Ichilov Hospital began vaccinating the staff members of educational institutions, including teachers and pre-school teachers, despite explicit orders of the Ministry of Health and Minister Yuli Edelstein. The vaccination campaign certainly ran counter to the prioritization schedule put together by government experts.

Minister of Education Yoav Galant, the teachers’ organizations and others have all been demanding that educators be among the first recipients of the vaccine. Galant even said, “Teachers and pre-school teachers are responsible for the one thing we value most of all — our children. I demand that they be vaccinated immediately, and I am convinced that the government will approve my recommendation.” Though Prime Minister Benjamin Netanyahu and Edelstein promised to look into it, and even to approve these vaccinations soon, no official decision has been made at the time on the matter.

Huldai took it one step further, originally making the false claim that educators were being given spare vaccine in order to ensure that it didn’t go to waste. Only later did he make a full confession about what he was actually doing. As a result of his efforts, 3,000 people received the vaccine in a tent in downtown Tel Aviv during a two-day vaccination drive. The Health Ministry responded by turning off the tap. It simply refused to provide additional vaccines to Ichilov Hospital.

The ensuing clash underscores the problems inherent in a struggle between the various powers. The government was supposed to manage the nationwide vaccination campaign and make it a top priority, but it is embroiled in a drawn-out political crisis. Effectively, the current coalition is little more than a transition government. People have very little confidence in it.

Mayors and other local leaders are taking advantage of this situation by stepping in to meet the need. While busy with an election campaign of his own for the Knesset, Huldai has decided to challenge the Ministry of Health over its failure in administering the vaccination campaign. Inevitably, Likud ministers are now accusing him of doing this to further his personal Knesset campaign and his national political aspirations.

Similar steps were taken by Carmel Shama HaCohen, mayor of Ramat Gan, one of Israel’s biggest towns. He secretly vaccinated 1,500 teachers, pre-school teachers and other educators in his city. The explanation he gave was that educational staff were suffering along with their students in the third wave of the pandemic. As he put it, 50% of new cases in the city are the direct result of, “the helplessness and incompetence of the government.  He went on to say that, “The real questions that need to be asked about the failure to vaccinate teaching staff, who were abandoned in order to vaccinate young people, should be put to Netanyahu and [Defense Minister Benny] Gantz. They only remembered to vaccinate educational staff, when it was already too late in the game, and only after coming under intense scrutiny and criticism.”

It is important to note that Shama HaCohen is no fan of Netanyahu. He supports Gideon Saar, who is running against Netanyahu for prime minister in the upcoming election.

It is also important to note that these steps taken by Huldai and Shama HaCohen have been subjected to sharp criticism by other mayors. Bibas called what they did nothing less than bully behavior, and complained that it would lead to anarchy. He went to accuse Huldai of exploiting the fact that Tel Aviv is a wealthy city with a private hospital. What about poorer cities that lack the resources and don’t have big hospitals?

Nevertheless, the coronavirus pandemic clearly highlighted the advantages of local rule over central government. This is especially true during a drawn-out political crisis that has been going on for two years now. National politics have failed the country and resulted in yet another round of elections. Bibas even told Al-Monitor that the politically-complicated past two years have actually done the work of transferring power to the local authorities. “We’ve been carrying the ‘stretcher of state’ for two years now, and we haven’t done too badly at all. The more that power is transferred to local government, the more we will be able to reduce bureaucracy, eliminate burdensome regulations and distance ourselves from the atrophy occurring in government agencies, and which is all the more apparent now. The coronavirus highlights the disconnect between the central government and the people who can best implement it on the ground, i.e., local government and the Homefront Command.”

What Bibas wants to see is a reallocation of authority between the municipalities and the central government. “I do not need some government bureaucrat to decide for me what is best for the people of my city, especially when I fund a good part of that. We know how to manage [our cities] much better than they do. We’re talking about bureaucrats, who have been in their jobs for years. All they want is to keep whatever power they have,” he said.

One principal example Bibas is giving is online studying, which has become a critical challenge ever since the outbreak of the pandemic. “We’ve been asking to move to online learning for years, but they [Ministry of Education] blocked it. Then the coronavirus came and slapped them across the face. With some foresight, you can now see that the current combination of traditional education with technology and advanced curricula will continue well into the future. The central government fails to see this because it is so alienated from what is happening on the ground. We are intimately connected to it, so we have known this for a while now.”

It is worth noting that Bibas also has political ambitions on a national level. He told Al-Monitor that he plans to run for the leadership of the Likud and eventually for prime minister once Netanyahu leaves the stage.

Rishon Lezion Mayor Raz Kinstlich also has strong opinions on the issue. He has been outspoken throughout the pandemic about the need to transfer certain powers to local authorities, while offering his own sharp criticism of the central government. “The decision-makers forgot one very minor point: In this war that we are fighting, there is no distinction between the national struggle and the struggle being waged by the local authorities. It is a common struggle. The one group of people that does not understand this is the ‘coronavirus Cabinet.’ It consists of ministers, deputy ministers and the directors of ministries. What it does not have is a single representative of local government,” he told Al-Monitor.

With the government in a perpetual state of crisis, the coronavirus pandemic propelled the country’s mayors to a position of unprecedented prominence. On a national level, with elections set for March 23, the current government is little more than a transition government, biding its time until a new coalition can be formed. Mayors are asking for power to be relegated to them because of the inherent weakness of the central government. At the same time, having proved their ability on a local level, some of these local politicians could now be on their way to positions of national leadership.