Seeking support from the Arab electorate at the upcoming March elections, the parties of the Israeli left and center are suddenly adding Arab candidates to their Knesset lists. 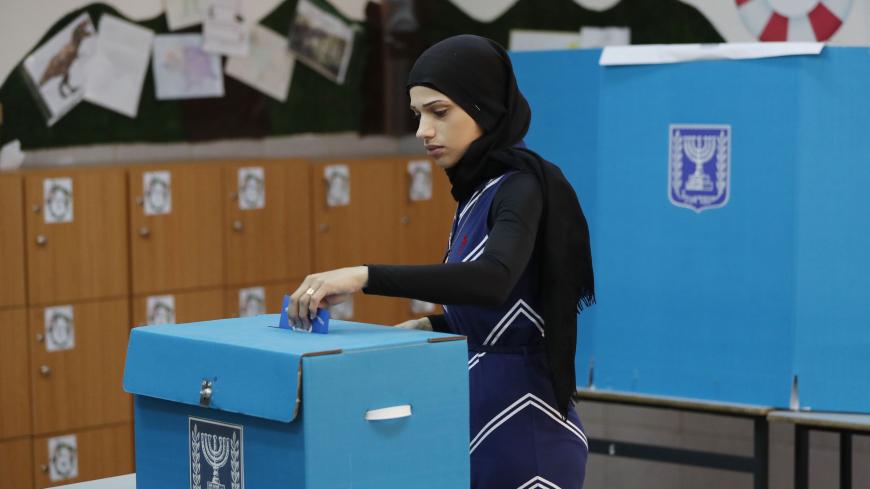 An Arab-Israeli woman casts her vote during Israel's parliamentary elections on April 9, 2019, at a polling station in the northern Israeli town of Taiyiba. - AHMAD GHARABLI/AFP via Getty Images

His motion was approved Jan. 4 in an online session by 80% of the members of the party’s top decision-making body, making Meretz Israel’s only Zionist party with Arab representation at the top. The move was nothing short of amazing, given that just months ago, the party sidelined Frej, its only Arab Knesset member at the time, moving him to 11th place, an unrealistic spot on the combined Labor-Meretz-Gesher slate that ran in the March 2020 elections.

A new wind is undoubtedly blowing from the political center left toward the country’s 21% Arab minority ahead of the March 23 elections. It provides a stark contrast to the prevailing climate of the three previous elections of the past two years, which saw all Jewish parties and candidates distance themselves from Arab voters in a bid to curry favor with Jewish voters and thus oust Prime Minister Benjamin Netanyahu. That tactic backfired, galvanizing an unprecedented Arab turnout in the March 2020 elections.

The outcome has prompted the center-left as well as Netanyahu himself to change course and reach out to Arab voters. Netanyahu, in a strategic about-face, has been stumping for votes in Arab towns in recent weeks and is even said to be considering the appointment of Nail Zoabi, a Muslim Arab from the northern village of Nein, to a top slot on his party’s Knesset list. Zoabi is politically affiliated with the political right, the Likud in particular, and his recent resignation from his job as a school principal could point to a planned Knesset run.

Ultimately, Netanyahu plotted to delegitimize the Arab vote and is now its leading suitor, indirectly paving the way for parties on the center-left to resume their wooing of Arab voters. In a conversation with Al-Monitor, Horowitz explained the change. “Meretz is proud to present the most ideological and committed group of candidates in Israeli politics ahead of the coming elections, and of course a true Jewish-Arab partnership. In the next Knesset, Ghaida Rinawie Zoabi and Esawi Frej will not only represent Meretz in Arab society but throughout the country.”

And how does Zoabi herself see it? “I am totally proud that the Meretz party has accepted me into its ranks. I promise that just as I fought throughout my public life for true partnership, I will continue to work for social justice, equality and decency, and civic solidarity as a Knesset member representing Meretz,” she told Al-Monitor.

“As an Arab Palestinian woman and a citizen of the state, I want to take part in building and shaping its image. My struggle against discrimination, racism and incitement has led to my focus on a true partnership, because it is only through true partnership and civic solidarity that I will be able, as an Arab woman, to advance the status of Arab women, to improve the quality of local government, to achieve distributive justice, to advance access to health care and to deal with housing, welfare and education,” she said. “True partnership and civic solidarity not only in terms of social-economic issues, but also as a compass in constantly striving for a just, fair and sustainable solution to the Arab-Israeli conflict.”

Meretz is not the only party on the center-left wooing the Arab vote. The centrist Yesh Atid chaired by Yair Lapid is also joining the contest for this constituency after not fielding an Arab candidate in years. This week, Knesset member Gadeer Kamal Mreeh, who crossed over to Yesh Atid from the government coalition’s Hosen LeYsrael, announced her resignation from the legislature, a move that could prompt Lapid to seriously consider replacing her with an Arab candidate on the party’s list.

Knesset member Ram Ben-Barak, Yesh Atid’s campaign manager for the Arab public, told Al-Monitor, “There is talk of including an Arab candidate on our list, and it will happen. We are examining this issue in depth. In my view, the entire Israeli public must be represented in the party, certainly when it comes to 20% of the state’s population.”

Not everyone is moved by the winds of change. In an interview with Al-Monitor, Rabea Bader from the Galilee Druze town of Hurfeish and editor at the 103fm radio station, addressed the apparent shift by the center-left. “Why should Arab society believe you now? When you were needed, you closed ranks with the mainstream in order to pick up a few more votes and abandoned us as though we were lepers. You should have embraced the Arabs when others incited against them, when they were boycotted. Love has no value if it is not for better or worse, and you shook them off when times were bad, so don’t expect their love when times are good.”